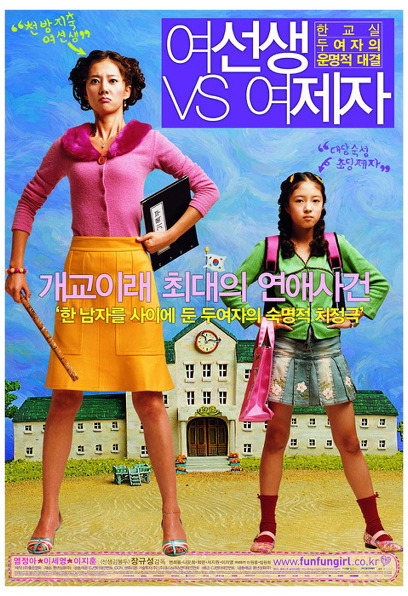 A female teacher and a female student clash in one classroom!

An elementary school in a small town by the sea.
Yeo Mi-ok (Yeom Jeong-ah), an old-fashioned, ardent maiden teacher who even the principal cannot stop. Behind her elegant appearance, she is living by hiding an impudent woman who is naive and shy.
On the first day of the new semester, the teacher's mistakes can easily be overlooked, but the students' mistakes are unforgivable. At the same time, he tries to seize the momentum of the children with the excuse of a daring transfer student, Ko Mi-nam (Lee Se-young), who is not terribly late even though he is late. However, a handsome man who has a body that looks a lot more mature than his peers and even speaks like a teacher is not very sloppy, and Miok is such a handsome man.

Handsome bachelor teacher sets the hearts of two women on fire!
One day at the start of such an unusual new semester, an incident that shakes the girls of a country school in an instant occurs. Kwon Sang-min (Lee Ji-hoon), an ulzzang bachelor teacher, is newly appointed! A female teacher who was only looking for opportunities to quit her rural life and enter a big school in Seoul is no exception. The female teacher who has a crush on Kwon Seon-saeng does everything she can to capture her. However, there was an unexpected enemy standing in front of her, so the main character is a handsome disciple whose boldness is the same as the teacher.

Mistress vs. female disciple's climax salting
Mi-ok, who turns into an innocent and sweet girl, only in front of Kwon Seon-saeng, and a handsome man who boldly dashes to Kwon Seon-saeng by revealing the pretentious identity of his homeroom teacher in every case. The unimaginable saltiness between these rivals is running towards the climax.