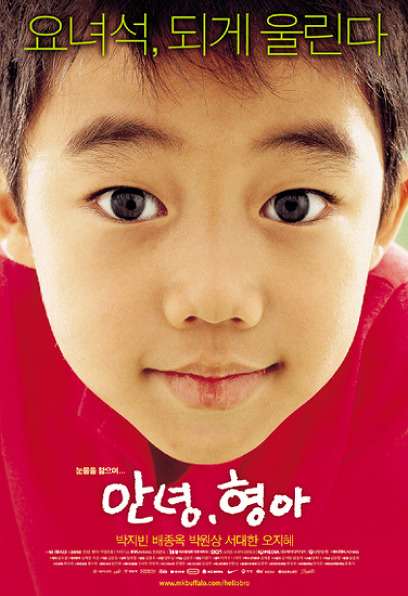 9-year-old Jang Han-yi is a troublemaker who has nothing to fear in the world. All of my schoolmates are my nephews, and my family is nothing but subordinates. In particular, the hyung who sometimes complains about being sick, Hanbyul is the best bullying practice partner.
Today, my brother is sick. I set the alarm clock to say I had to go to academy, and while my brother was sleeping, I secretly turned off the alarm, but oh, my mom just caught me. There is only one way out.
“Brother… I'm sick… therefore… “
I was sneaking away because I was afraid of my mother's rod, but my brother suddenly vomited something and collapsed. So we all had to spend the day in the hospital. Not going to school makes me less scolded… The mother and the doctor-grandfather exchange serious conversations, but Han is only grateful to the older brother who threw up at the right time.
“Heh heh, hyung is actually sick because he doesn’t want to go to school, right?”

It is said that the older brother has a bad lump in his head, so he opens his head and cuts it off. Ugh, but I don't know why I cut my hair so hard when I cut a lump in my head… Even if my father, who used to only laugh every day, suddenly changed his color and threatened to hit him with a stick if he bullied him even once, he had another way to make fun of him.

“Tight hair bro”
Because of his hospitalized older brother, the hospital has become another playground, and one tackle comes to Han, who is running through the hospital corridor without hesitation. Ugly, a village boy with a strange tone who ended up using the bed next to his brother! Sowon is a comedian, and he is a poor comedian who asks him to call him 'Okdongja'. It's weird in appearance, and it's only that he's too tight, so he pretends to be close to his older brother and makes him ignorant.

“Wow, why are you chasing me? Everyone is dead.”
But, seeing that his father and mother hold on to the doctor and grandfather and cry every day, and that the older brother should not bully Ugi because he is sick, it seems to be quite painful. I don't know if I'll be able to become a comedian who's the equivalent of 'Okdongja' when I grow up.

A devil has appeared in the heaven of tight-headed people?!

Hospitals, older brothers, surgery, drugs… Mom, dad, bro… Damn no fun Han Yi, who received the fever as soon as she had it, blew her friend's nosebleed at school, and another shot at Ugi at the hospital. The homeroom teacher comes to the hospital… In a desperate crisis situation where he is double scolded, he hates being with villager Ug-i more than he wants to die, but he has no choice but to flee to Ug-i's house in the countryside. Urban troublemaker Han, for the first time, has a simple, fun time with country villager Ugi. 'Uncle Tarzan', who lives in the mountain behind, gave me mysterious water, so Ugi also got sick and woke up right away… Turns out it was a pretty good trip.

Big brother, wow! It's okay to be a country boy with tight hair… do not die!

I thought everything was going to get better because I was running around the countryside behind the mountain, but Ugi returns to the hospital and sleeps every day. The doctor's grandfather always has a hard face, and I don't know when this guy will open his eyes. Moreover, the older brother also said that he had all the bad lumps out of his head, and that he had another surgery.
In a white room lined with strange machines, Hyung-ah and Ugi do not open their eyes.

Ugly, even though I brought my favorite comedian, Ok Dong-ja, won't he just sleep?
If I bring you the mysterious water from the mountain behind Ugi's countryside, will your hyung wake up too?
Han, who used to be a troublemaker, starts to get busy…

What will be Han's final goodbye?
Is it Good Bye or Hi?