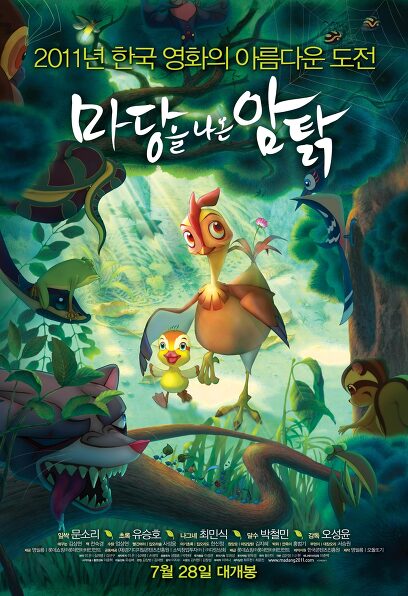 A hen dreaming of a free world outside the yard!

The hen's leaf sprout, who lived in a poultry farm and laid only eggs, dreams of going out to the yard to live freely and incubate eggs. After starving for a few days and pretending to be a closed system, he is finally dumped in a puddle of closed system in the back mountain and succeeds in leaving the yard, but is just one step away from being eaten by a one-eyed weasel! With the help of a mallard traveler, he manages to escape from a dead puddle and save his life…

The hens have duck eggs!
The leaf buds, which finally came out to nature, enjoy freedom and gradually adapt with the help of a stranger and a moonsu. Then, one day, she finds a white duck egg abandoned without an owner, and the leaf bud begins to incubate for the first time in her life. The traveler who was protecting the leaves and eggs from the one-eyed weasel meets its end, and the baby duck, who finally wakes up from the egg, regards the leaves as 'mother'…

A brave challenge from a fearless mother and son!!
Green hen buds and mallard ducks on their journey to a swamp safe from weasel threats
Will they be able to realize their dream of flying more freely and higher in the wild nature?

The feature-length animation <Hen Out of the Yard> has been a steady seller for 10 years since the first edition was published on May 29, 2000. The novel of the same name with cumulative sales of 1 million copies was made into a movie.
This novel, which shines with the deep theme of writer Hwang Seon-mi, who portrays the beauty and dignity of life with dreams, and the process of sublimation of holy maternal love, has been evaluated as 'the crystallization of children's literature that has entered a new heyday since the 1990s'.
Myungfilm, who thought that Korea also needed a feature-length animation that all generations could enjoy together, came across this novel and over the years, overcame the vulnerability of Korean feature-length animation storytelling, and turned a wide readership, from children to adults, to potential audiences for the film. Decided to make it into a movie, deciding that it could be absorbed, and in May 2005, he signed a contract with Odoltogi, who had already planned to make the original into a movie, and obtained permission from writer Hwang Seon-mi and the publisher.
However, the biggest factor that captivated the production crew above all was the deep impression that this novel conveyed by the 'relentless challenge of the hen, 'Leafbud', who does not settle for reality and is not afraid of adventures.

2. Participating as Korea's representative screenwriter!
In May 2005, I signed a script contract with Kim Eun-jung, the writer of <Access> and <Hello, Hyung-ah>, and started working on the screenplay based on the original. The film was made into a new character, such as adding the character of 'curious wacky' to the character of 'Leaf Bud' and creating a new character, 'Dal-su,' a chattering helper that is not found in novels. Writer Na Hyeon, who wrote the book, completed the development of the final scenario in September 2008 by focusing on solid dramatic composition and completeness.

3. Participate in voice acting by the best Korean actors!
The voice acting of the movie <The Hen Who Came Out of the Yard> was performed by Korea's leading actors such as Moon So-ri, Yoo Seung-ho, Choi Min-sik, and Park Chul-min. In addition, the 'pre-recording – marquee painting – main recording system', which is rare for Korean animation, was introduced to compensate for the lack of completeness of the production method only with back-scene recording.
In May 2009, they started the drawing process according to the pre-recorded content of these actors, and in March 2011, when the production process was finished, the original voice was recorded again to give life to the character. It goes without saying that there have been many changes for these actors who were reunited in March, more than two years after the pre-recording.
Moon So-ri, who takes on the role of a hen called ‘Leaf Bud’, became a real mother who conceived a baby while she played the main character full of motherhood, Yoo Seung-ho, a shy boy in the transition period, has grown into a handsome young man, and Park Chul-min, a master of comic acting, is now a Korean filmmaker. Demonstrates a presence responsible for the laughter of Choi Min-sik, who did not hide his excitement for his first animation voice acting challenge with Moon So-ri and Park Chul-min, is still active in his work.
In addition to the pre-recording, Moon So-ri, who took part in the full-day recording in March last year, performed a tearful performance in the recording studio that was reminiscent of a live-action movie set, touching the hearts of the directors and producers watching.

4. One year of pre-production, two years of production!
The production team, who spent a year in pre-production such as character design, art concept confirmation, and video continuity, started drawing in February 2009. The production team of Odoltogi visited Upo Wetland, designated as Natural Monument No. 524, which became the main space of the film, several times, and completed the appearance of mountains, lakes, and fields in Korea in a new style incorporating oriental painting techniques.
In addition, to complement the flatness of 2D cell animation, special effects such as filtering, blurring, lighting, etc., and synthesis of 3D techniques were actively attempted to improve the completeness, and in certain scenes, the ‘digital cutout animation ' We did our best to improve the formality of the film, such as introducing the technique.

5. Verification and recognition from domestic and foreign experts!
The movie <The Hen Who Came Out of the Yard> was selected for the 'Shinhwa Creation Project' of the Gyeonggi Digital Content Agency in July 2008 and signed an investment agreement. The film's completeness and success potential have already been verified and recognized by leading judges overseas and in Korea.

7. The Czech National Symphony Orchestra performs and IU sings the theme song!
The music for the movie <The Hen Who Came Out of the Yard> was composed by music director Lee Ji-soo, who is famous for <Oldboy>, <Blood Nude> and <Hello, older brother>. In March 2011, he flew to Prague and performed by the Czech National Symphony Orchestra. His film music was completed with excellent sensibility and grand scale.
In addition, the theme song that impliedly expresses the theme of the film by decorating the ending of the movie is 'Melody of the Wind', and it was sung by IU and Diva, a girl who has emerged as a hot icon in the popular music world.