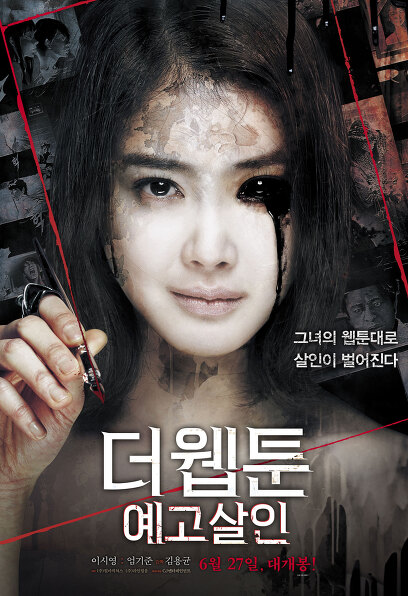 Murder happens according to her webtoon!
A mysterious incident site where a brutally murdered body was found. There is no sign of intrusion, so they conclude that they are all suicides, but the detective Ki-cheol in charge instinctively senses that it was a murder. While investigating the case, he found out that the victim, who was the editor of the webtoon part of the portal site, was watching the webtoon of Jiyoon, the author in charge, before he died. He goes to Ji-yoon to find him.
Meanwhile, Ji-yoon, who suffered from terrible illusions due to the stress of creation, denies the charges that all of her webtoons are made up stories and have nothing to do with the incident. However, soon a second victim appears, just like her webtoon, and Ji-yoon becomes a strong suspect. In shock, she eventually begins a shocking confession about her webtoon…
[ About Movie ]

Responsible for the summer of 2013!
The birth of the first sensual horror based on webtoons in Korea!

In 2013, the film industry was hot with webtoons. The meeting between webtoons and screens continues, encompassing various genres such as drama, thriller, horror, action, and comedy. In particular, this year, popular webtoons such as <Fist of Legend>, <Secretly, Greatly>, and <Misaeng>, which recorded huge hits, are being made into movies, attracting attention. And this summer, a movie based on 'Webtoon' itself was born, rather than a movie based on an existing webtoon. The main character is <The Webtoon: Preliminary Murder>, a horror thriller in which serial murders actually happen in the same way as a popular webtoon author's webtoon.
A webtoon that anyone can view anytime, anywhere. Thanks to this, webtoons are already a common and familiar medium for us. The movie pays attention to the popular properties of webtoons, and collects curiosity with a differentiated story that differs from the original webtoon movies. Director Kim Yong-gyun, in charge of directing, said, “I started talking about webtoons just like people talking about the drama or movie they saw yesterday. Contrary to the original webtoon movies, it was interesting that the webtoon was the subject of the movie, and I thought it would give a different kind of fun if the webtoon was used as a picture in the movie.”
Rather than borrowing a story or character from a webtoon, <The Webtoon: Preliminary Murder>, which took the material and form from a webtoon for the first time in Korea, offers a new thrill with a mysterious setting in which the situation in the webtoon takes place in reality. The moment their mistakes are revealed through the webtoon, the victims die in a mysterious way. The moment the shocking secrets involved are revealed, the movie gives viewers an exhilarating sense of immersion that goes beyond horror and thriller with a reversal that exceeds expectations. In particular, the various visual effects using webtoons shown in this process will give viewers a sense of fear and tension that they have never felt before, and will tighten the hearts of viewers.

Gives you a fantastic breath of horror!
2013 Horror Queen 'Lee Si-young' and 'Um Ki-joon' eerie meeting!
Lee Si-young, an attractive actress who never stops challenging, and Um Ki-joon, a popular man who works on stage with a CRT, met through <The Webtoon: Murder in Advance>.
Lee Si-young, who has been loved for her unique and lively charms by appearing mainly in romantic comedies such as <Man's Manual> and <Dangerous Situation>, presents a 180-degree change by challenging the Horror Queen in Chungmuro with this movie. Taking on the role of 'Ji-yoon', a writer who draws a webtoon that foreshadows murder, she completely breaks away from her existing image and will show the true value of an all-around actress with more mature acting and emotional expression. Director Kim Yong-gyun said, "Lee Si-young is a natural actress. The energy emanating from her and her passion for acting will break her acting pattern, which was limited to comics, and show her potential as a horror thriller actress.”
Meanwhile, Um Ki-joon, who showed rational and cool charisma in dramas such as [The World They Live In], [Ghost] and [The Virus], took on the role of 'Ki-cheol', a detective with an instinctive sense of reasoning who persistently pursues a mysterious serial murder case. come back “Uhm Ki-joon played the character 100% with stable acting skills. As director Kim Yong-gyun said, "I really believe in his acting," Um Ki-joon perfectly expresses the important character who leads the story of the play by displaying his unique sassy charm on the screen, balancing the film. In addition to the release of the movie, he is already a special A star in the musical world, and he will meet the audience with large-scale musicals such as <Monte Cristo> and <Jack the Ripper> at the same time, heralding the occupation of the stage and screen this summer. Lee Si-young and Um Ki-joon star in their first horror thriller. The intense transformation of the two actors, which exceeds everyone's expectations, will show a fantastic breath of horror. In addition, as the shocking secrets entangled in the secret webtoon are gradually revealed, the relationship between the rapidly changing characters creates a tense sense of urgency that makes you sweat until the end, foretelling the birth of the best horror thriller of 2013.

<The Pink Shoes> Director Kim Yong-gyun, he is back!
Master of Korean horror thriller, comeback full of confidence!
Director Kim Yong-gyun, who changed the landscape of the Chungmuro horror film market by showing that horror can be beautiful with the well-made horror <The Pink God> in 2005. he's back! Director Kim Yong-gyun, through his fourth work <The Webtoon: Murder in Advance>, shows the charm of the genre and his own personality without regret, confirming the value of the name of a representative Korean horror thriller. In this film, which is the second horror thriller to be directed, the element that Kim Yong-gyun focused on above all else was the story. “The scenario was detailed and the story was rich. In addition, the speed was good,” said director Kim Yong-gyun, who made a film that could elicit sympathy from the audience. “I focused on showing the persuasive power of the characters. Beyond the feeling of being a scary movie, I wanted to make a movie that was both tense and meaningful when I followed the story while enjoying it like a roller coaster.” bet with
After a long discussion with the production team, director Kim Yong-gyun, who is famous for meticulous attention to detail, found a suitable texture for <The Webtoon: Murder in Notice>. In the director's desire to capture a new space that had never been seen before, the production crew found different places such as work spaces that feel eerie, quiet country roads, abandoned barns, and eerie mansions in old neighborhoods to give the protagonist's story an atmosphere. In the musical aspect, director Kim Yong-gyun's delicacy shone. The music of perfect balance, neither too much nor too little, added thrill and suspense to the film, and doubled the tension of the film. In addition, he introduced elements with contrasting feelings such as darkness and light, slow and fast, invisible and visible, and skillfully adjusting the strength and intensity between the elements to create a well-woven film. A well-made horror thriller <The Webtoon: Preliminary Murder> with a different level appeared in the horror movie market in Chungmuro, where teen horrors have been eroded. This summer, it is expected to captivate both male and female audiences in their 20s and 30s who have been waiting for a well-made horror movie, including teenagers who will cheer for the new genre of 'webtoon horror'.

Jiyoon Kang, a popular horror webtoon writer who is known among netizens as 'Gyoju', has released a new work [Story]. Jiyoon Kang, who achieved success by recording explosive hits with his debut work [A History of Madness] with an impressive realistic storyline and unique drawing style, does all the work alone, and there is no known information other than leaving a blood sign on each work, so it is always the center of the topic. was in Finally, today, writer Jiyoon Kang is known to appear in front of the public through the [Story] new work presentation, attracting attention.
Meanwhile, while the new [Story] has already surpassed the number of hits of [A History of Madness], a murder case similar to the situation in the webtoon by writer Jiyoon Kang has actually occurred and is shocking the public.

It connects the site of the new work presentation of writer Jiyoon Kang, which is becoming an issue every day.

Are webtoons drawn on the screen?
The total set of Chungmuro technology! The crew who breathed three-dimensional life into the webtoon!
The secret weapon of the horror thriller <The Webtoon: Preliminary Murder> that will hit the summer of 2013 is the webtoon effect in the movie. In the past, cartoons and animations have been inserted into movies, but this is the first time a webtoon has been used to give a three-dimensional effect by mobilizing the latest CG technology such as 3D.
How to implement the webtoon in the movie was one of the biggest missions given to the production team. Contemplation about this started from the planning stage, and the main topic of discussion was how to match a webtoon composed of motionless cuts to a film that can be called the art of movement. First of all, the production team put a lot of effort into recruiting a webtoon writer to draw the picture for the main story. Since it was a project that took more than a year to work, I decided to work with a new webtoon writer who had worked on a movie continuity, but the work process was also difficult. Since there should be no awkwardness when connecting to the live action, the work was carried out in such a way that the artist first drew a sketch suitable for the scene, used the image as a continuity to shoot, and then the author looked at the filmed version and completed the final webtoon cut. It was a very large-scale work that took about 100 hours just to draw a single picture. The technology to give movement to the webtoon was also mobilized. By introducing a 3D effect to the webtoon image, it gives a three-dimensional effect as if the picture is moving. In particular, it was the episode of Seo Mi-sook's graduation ceremony that appeared at the beginning of the movie. 2L, one of the best CG teams in Korea, took on the task, separated each element in the picture into layers, and added a moving effect between them, creating a vivid effect as if the camera was digging through the characters standing on the playground. . In addition, by giving movement to each element in one cut, it creates a scene as if drops of blood or leaves are flying over the face of the person, creating vividness as if the webtoon is alive on the screen. In particular, in order to reduce the heterogeneity of audiences who have generally viewed webtoons only as monitors, we tried to make it as natural as possible to view webtoons on the screen by shooting at 1.85:1, which is close to the monitor size, rather than 2.35:1.
Director Kim Yong-gyun said, “When we connected the still image of the webtoon and the moving picture of the movie, we thought a lot about how to double the charms of each other without sacrificing each other.” According to his intention, the film provides a sensuous and sophisticated fun that is differentiated from existing films by utilizing fresh visual effects where the webtoon overlaps with the live-action film and the live-action film overlaps with the webtoon. In addition, it will bring a fresh stimulus to theaters this summer with a successful attempt so that it is not awkward to say that the birth of webtoon horror in 2013 is not awkward.