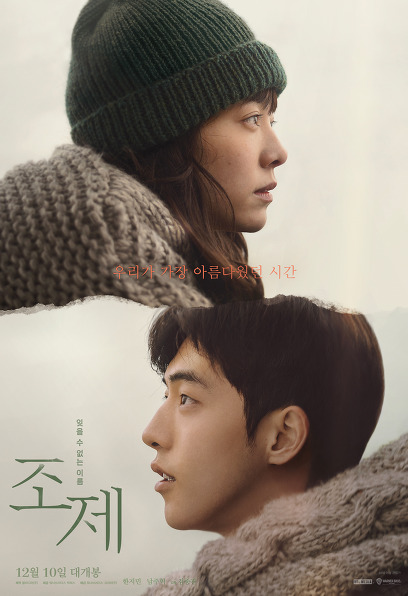 She asks her to call herself 'Joe'
From the day we first met, ‘Joe’ remains an unforgettable name for ‘Young-seok’.

A house where I live alone with my grandmother, reading and imagining books there.
José, who lives in her own world.
‘Young-seok’, who started to feel special feelings for the woman he met by chance,
Start approaching them slowly and honestly.
However, while experiencing love for the first time is exciting and heartbreaking, 'José'
Pushing away the unfamiliar feelings that come to you…

will remember
every moment with you

Why Pharmacy? After I decided to remake Jose, there were times when people around me asked cautiously, a little worried. It is a burdensome work that has the weight of a very good original that has been loved by many people, and it is a burdensome work that has to be deeply troubled, such as the problems that need to be considered in the changing times, and the direction as a popular movie. Nevertheless, there were countless reasons to challenge this film.

The charm of the original novel and movie is what I have always wanted to include in my numerous creations. I thought that it might be possible to tell a slightly different story while preserving the original emotions of deep eyes and love for people. There are many good points in the original work, but I am convinced that following the same path that the film has made is not a good choice for the audience who will see this film, as well as me and the actors who will challenge this film. Just as Romeo, Juliet, and Joker have many faces, when the texture of the actors meets the character, each individual and vitality is created. We believe that when creators understand the value of the story and the individuality of the creator is revealed in it, good creations that do not damage the original work can be produced.

I was able to find the answer to the question of why Jose? by myself while preparing the film and going around the location hunting papers to be used in the film. I searched for a space that would become José's house, and found shabby walls and alleys. I chased after old roads, winter amusement parks, junk stores, gosiwons, used bookstores, winter food stalls, and spaces where life was a bit lonely. Jose in the movie I made is a collector. He is a person who collects discarded things and discovers beauty. the assistant says
“This place is like a shelter for abandoned things. I'll make you happy"
Like Jose, I also wanted to give a spotlight and beauty to an abandoned or lonely world, and that was one of the great charms of this film.

Who was your 'Jesse'?
For everyone who has experienced love
An unforgettable special movie this winter
This winter, a special story that will move the hearts of all who have experienced love is coming. <Joe> is a movie depicting the most brilliant moment of the unforgettable moments of ‘José’ and ‘Young-seok’ together from the day they first met. The movie “José”, which begins when ‘Young-seok’, who is about to graduate from college, accidentally meets a person who asks him to call him by the name of ‘Joe’, the movie ‘José’ depicts the unforgettable moments of love in dazzling days with a delicate gaze. ' reminds me of ‘Jojo’, who has lived a life different from others as much as his special name, and ‘Young-seok’ who approaches her with honest feelings. The story of two men and women who are excited and hesitant at the first feelings, happy together but also anxious in the face of unfamiliar changes, recalls the most beautiful memories of love we have all experienced and evokes sympathy. Jojo, who has lived in his own space separated from the world, begins to learn the feelings of love through meeting with Yeong-seok, while at the same time cherishing himself and gaining the courage to accept change. Meanwhile, 'Young-seok', who has to take the first step into the world before graduating, through love with 'Jeose', he grows up with a lot of pain as he ponders more deeply about himself and the future he was not sure about. In this way, the appearance of two people who change through love and go out into the world leaves a special aftertaste that goes beyond a simple love story. Following the drama [The Dazzling], Han Ji-min and Nam Joo-hyeok met for the second time, and director Kim Jong-kwan, who has been loved for its sensuous visual beauty and delicate storytelling, raises expectations for the movie <José>, which this winter, will bring an unforgettable special sensibility. It will move the hearts of the audience.

José, a woman living in her own world
‘Young-seok’, a man who entered the world of Jose
Meet their most beautiful moments
<Joe> awakens the memories of everyone with a story about love drawn by vividly living and breathing characters. José has lived in her own space, away from the usual daily routines of going to school, work, or hanging out with friends. It's not easy to go out, so 'José', who stays in the house where she and her grandmother live alone, touches the world through books, and embraces various imaginations, sometimes tells unexpected tastes and stories, and sometimes with other people who are amazed at things that are too natural. It has other special charms. That's why she continues to be curious about her story and makes her want to open and enter her own tightly closed world. Such ‘José’, through meeting with ‘Young-seok’, for the first time, contemplates life and love with the same emotions and minds as others, and is deeply resonant.

‘Young-seok’ lives an ordinary life that is no different from other people, from school to part-time work to preparing for a job. It is a moment when it is necessary to move forward into society, but 'Young-seok', who has vague anxiety ahead of a clear goal or earnest wish, is more and more drawn to the unfamiliar but special charm of 'Jojo'. The appearance of 'Young-seok', who finds the book that 'Josie' wants and goes with him wherever he wants to go, stimulates sympathy with his candid feelings completely immersed in love. The story of two men and women who change through the emotions of love and parting, happiness and anxiety coexist, conveys a faint lingering impression in a way that is no different from the love we all experienced. <Joe>, which depicts this unforgettable love story with realistic characters and delicate story, will bring a special sympathy that can make you smile and hurt your heart.

Han Ji-min & Nam Joo-hyuk
The most dazzling meeting this winter
Reunited with deeper feelings
<Joseon> raises expectations with the second meeting between Han Ji-min and Nam Joo-hyuk, who captured the hearts of viewers through the drama [The Dazzling]. Han Ji-min, who has succeeded in success in the dramas [Knowing Wife], [The Dazzling], and [Spring Night], and established herself as a trusted melodrama queen, shows more detailed emotional acting through <Joseon>. ‘Woo-Jin’ of the [Knowing Wife] who faces a new life due to an unexpected incident, ‘Hye-Ja’ of [The Dazzling] who has the ability to turn back time but is trapped in a tangled time, a librarian who pursues his own happiness [ Han Ji-min, who has been loved for her performances that perfectly match the characters such as 'Jeong-in' in [Spring Night], will once again move the hearts of the audience with a new face they have never seen before through the role of 'Joe', who lives in his own world. In particular, Ji-Min Han, who has been recognized for her acting skills across genres by winning Best Actress awards at many domestic and international film festivals through <Miss Baek>, delicately portrays ‘Jojo’, which feels both excitement and anxiety at the feelings of love that she experiences for the first time, with delicate emotional acting and eyes. to double the immersion of the film.

Nam Joo-hyuk, who is leading the trend in 2020 by crossing various platforms from the movie <Ansiseong> and the drama [The Dazzling] to the recent Netflix original series [Health Teacher Ahn Eun-young] and the drama [Startup], plays the role of 'Young-seok' in <Jojo>. It heralds the birth of a new representative character. Nam Joo-hyuk, who plays ‘Young-seok’, who gets to know the world of ‘Jojo’ different from others and feels special emotions, breathes life into the play by delicately depicting the change in the character who grows more mature as he goes through the process of love. In particular, Nam Joo-hyuk, who is honest with his feelings but still clumsy in love, with a natural acting, reminds me of a page of youth that was more beautiful because of love, and creates a lingering feeling. In this way, Ji-min Han and Joo-hyuk Nam, who have been reunited as lovers once again through <Joseon>, will captivate the audience with a more affectionate yet deep breath.

All spaces and seasons with Jose
A video that leaves a deep impression
Add deep emotion to a special love story
Due to the nature of the play, which captures the process of love that anyone can sympathize with, from the excitement of the first meeting to the calm parting, the production team focused on capturing the emotional changes of 'Jojo' and 'Young-seok' in a realistic space. In particular, José's house, where 'José' has lived her whole life and spends most of her time with, is a space devoted to the planning stage enough to be said to be another main character of the movie. The production team, who took the concept of a space adjacent to the sea, has a single-story Korean architectural structure in the 80s, and after inquiring all over the country to find a house that has a sense of life such as light fade and moss discolored by the sea breeze, the natural flow of time in Mokpo We were able to find Jojo's house containing the In addition, the interior of the house was completed as a space that is not monotonous but contains the sensibility of 'Jojo' through the contrast of height, width, and volume and control of the light. and added reality with detailed settings. Here, small items bearing the traces of time, such as second-hand books, whiskey bottles, and furniture, convey the taste of 'Jojo' and give you a glimpse into the world of 'Jojo'.

From a second-hand bookstore in Osan, Gyeonggi-do with the smell of old books, to Sapgyoho Amusement Park in South Chungcheong where you can feel the sea breeze, and even to an aquarium, the spaces where ‘Jojo’ and ‘Young-seok’ are together stimulate analog sensibility and evoke memories. In addition, 'José' filmed a location in Scotland, which he always wanted to visit, and completed a sensational video by capturing exotic scenery and special moments of 'José' and 'Young-seok'. In addition, as the emotional changes over time of 'Jojo' and 'Young-seok' are important, the production team doubled their emotional strength by capturing the mood of the seasons that flow naturally from autumn to winter to spring. The beautiful scenery that changes with the seasons, from autumn when leaves fall, winter when snow piles up, to spring when cherry blossoms scatter, will deepen the emotions of 'Jojo' and 'Young-seok' and give a deep lingering impression.