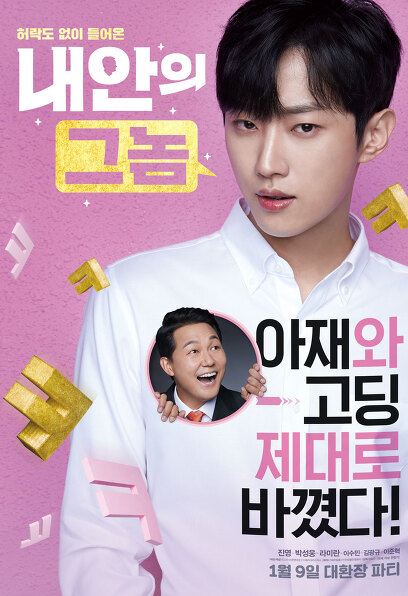 A boy who has changed properly, a high school student, and a laughter exchange party!

Dong-hyeon (Jinyoung), a high school student who fell off the roof, runs into an elite man, Pan-su (Sung-woong Park), and changes it!? In addition, Pan-su meets his first love Mi-sun (Ra Mi-ran) and his daughter Hyeon-jeong (Lee Su-min), who he did not know existed in Dong-hyun's body…

The feast of Daeyu Jam, you are already smiling!

Super powerful laugh bomb!! The first comedy movie to open in 2019
Monitoring rating of 4.7 out of 5 points of record Satisfaction

The movie <The Gnome in Me> received an all-time satisfaction score of 4.7 out of 5 and a strong recommendation score at the pre-monitoring premiere. It has elicited reactions from the audience such as “It’s crazy funny”, “It’s the funniest movie I’ve seen since I was born,” and “My mom enjoyed it more”, and it is establishing itself as the most anticipated Korean movie in 2019.

Jinyoung and Park Seong-woong, who played the lead roles in <The Guy in Me>, are a comedy about the feast of a young man and a high school student who changed due to an accidental accident, and a party of laughter. Jinyoung, who is active as a singer-songwriter and actor, showed his potential as an actor with his stable acting in works such as the movie <Miss Granny> and the drama <Moonlight Drawn by Clouds>. In his first lead role, <The Guy in Me>, he took on the role of 'Dong-hyeon', a high school student who became inseparable as he changed his body with his father, and showed various appearances in one movie, such as action, melodrama, and youth drama, a representative actor in his twenties. It confirms the broad smoke spectrum as a
Park Seong-woong, who has proven his wide acting spectrum through <Ansiseong>, <Method>, <The Shameless>, and <New World>, takes on the role of 'Jang Pan-su', the president of an elite conglomerate with the specifications from a prestigious university. It is equipped with a unique charisma as standard, and it shows an unconventional and different charm full of idiots beyond imagination.
In particular, the two actors lived together and read each other's lines to match each other's tone and went through a process of becoming similar.
In addition to the two actors, Ra Mi-ran, Kim Kwang-gyu, Lee Jun-hyeok, Yoon Kyung-ho, and Lee Su-min are also included, raising expectations for the film.

A revival of traditional school comedy
The movie that the whole nation loved and waited for is coming.
<The Guy in Me> is a work that announces the revival of traditional school comedy in the Korean film industry. In the early 2000s, films set in schools in the Korean film industry, such as <Teaching for Same-agers> and <Hwasan High>, had a great success. Not only movies, but also contents such as <School>, a drama that produced many stars, enjoyed great popularity with the background of the school.
Recently, the web drama [A-Teen] is gaining great popularity among teenage students, and the appearance of academies such as dramas such as <Adolescent Girls> and <Revenge is back> is attracting a lot of attention. < The gnome in me> is also receiving much anticipation and support, announcing the resurgence of academy comedy.

The advantage of a school comedy is that it is based on a story that is actually happening in the school as the background, so it has the advantage of giving a realistic laugh and gaining consensus from students of all ages, including those who went to school before or who are currently attending school. <The Guy in Me> also conveys realistic laughter by frankly portraying friendship between students, the problem of bullying, the love of youth and drama with family.

The acting passion of 'Jinyoung', who is representative of an actor in his 20s, and the fun of chemistry shown by 'Park Seong-woong', who shows novelty every time with various characters, is also great, but he is vigilant while turning over the reversal in familiar situations and predictable stories. It gives you a big smile in the moment.
Through the misunderstandings that occur because he looks like Donghyun but is on the inside, it delivers the fun of a comprehensive gift set that unfolds in a variety of ways, from comics to extremes, to melodrama and exhilarating action, providing a super-strong laugh bomb. In addition, Ra Mi-ran, Kim Kwang-gyu, Lee Jun-hyeok, and Yoon Kyung-ho enhanced the dramatic perfection with the impeccable acting skills of the unique new stealer corps.

Acting transformation is innocent
Ra Mi-ran, Kim Kwang-gyu, Lee Jun-hyuk, Yoon Kyung-ho, masters of life acting
The great charm of <The Gnome in Me> is that it has a unique charm that the genre changes for each cast member. It is not an exaggeration to say that each of them is the lead actor, so the masters of life acting appear in large numbers, making only the sound of laughter heard throughout the movie.
Prominent actors and actresses are placed throughout the film, even just by hearing their names, including self-approved acting skills and Chungmuro trend 'Ra Mi-ran', national single man 'Kim Gwang-gyu', 'Lee Jun-hyuk' who overpowers opponents with his eyes, now popular 'Yun Kyung-ho' and national sister 'Lee Su-min' and leads the audience to a great laughter party for 122 minutes.

Ra Mi-ran appears in the role of 'Miseon', the first love of 'Pansu', and performs passionately as the nation's first love as a representative 'trustworthy actor' of Chungmuro.
Kim Gwang-gyu appears as Dong-hyun's father and shows off his shining fatherly love. The son, who used to be kind, suddenly said, “I am not your son,” and his tone has changed, but he still adds a sense of realism to the way his son wraps his head around him. In particular, the scene where Kim Kwang-gyu, Park Seong-woong, and Jinyoung appeared was a killer point that delivered a big laugh in the movie, giving a lot of laughter.

Lee Jun-hyeok, who is familiar with various movies and recent dramas [Hundred Days My Lady], plays an active role as the strongest scene stealer as Pan-su's loyal servant. As the first person to notice that Park Seong-woong and Jin-young's bodies have changed, he takes the lead in solving the problem with the utmost loyalty, unlike his appearance that could easily be mistaken for a traitor. Characters that make you burst out laughing in every scene that appear are also expected to gather topics after the release.
Yoon Kyung-ho, who recently gained popularity with the movie <The Perfect Other>, appears as a rival of Pansu, confirming the charm of a skilled and natural acting that is different from previous films. It causes unexpected laughter in the hospital scene in the movie and even shows action performances that make even pants burst.

Realistic empathy in unrealistic situations
<Miss Wife> Director Kang Hyo-jin's ambitious work
Director Kang Hyo-jin, who directed <The Guy in Me>, has the advantage of portraying unrealistic situations in the most realistic way. From the unique setting of the oldest bank robbery in 2010 to <The Six Blooded Robbers>, to the anti-war life comedy <Miss Wife> in which you have to choose a completely different life due to a sudden accident in 2015, even in a fantasy-like situation that is difficult to happen in reality, many loved

Also in <The Guy in Me>, which will be released in the new year of 2019, through the story unfolding as the bodies of an elite father and a high school student change, he delivers a surprising laugh by demonstrating his special skills. With the familiar subject of 'body change', he completed a variation on laughter with his unique directing ability to confront clichés head-on. Amidst the harmony of the strongest actors and actresses, they show the beauty of natural laughter instead of boredom by convincingly and smoothly portraying misunderstandings that arise because they are high school students but on the inside, and the feelings of injustice after 30 years of being stolen.

<The Guy in Me> takes the existing strengths of a comedy movie, but rather than following the formula of a comical situation and ending with a clumsy feeling, it twists and turns every situation into laughter. Thanks to this, the audience will be able to check out the bizarre experience of bursting with laughter throughout the screening time.
In addition, director Kang Hyo-jin made use of his career in dealing with social issues such as his debut films <Punch Lady>, <Bad Blood>, and <Law of Violence: The Second Story of Bad Blood> as well as the comedy genre. In this movie, especially by borrowing the genre of comedy, it gives a lot of laughter from beginning to end, and at the same time delivers laughter and emotion to the audience at the same time by approaching family love and school problems without burden.