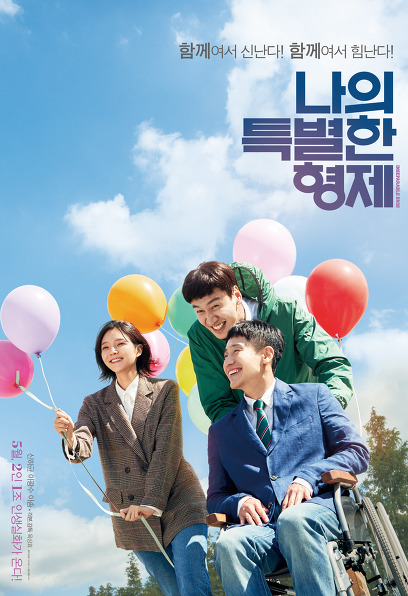 One day, when the priest who ran the 'House of Responsibility', the brother's nest, dies, all subsidies are cut off, and the two people with different disabilities are on the verge of breaking up.

Se-ha succeeds in attracting people's attention by recruiting 'Mi-hyeon' (Esom), a part-timer and trainee at the ward office swimming pool, as a swimming coach in order to keep the 'house of responsibility' and not fall apart from Dong-gu.

It's been a while since I saw hope that we could never part.
As an unexpected person appears in front of the brothers, the brothers face a new crisis…!

There are brothers like this in the world!
A special human comedy that I have never seen before.

The movie <My Special Brother> is a human comedy depicting the friendship of two men, who have lived as one body for 20 years, though they do not mix a drop of blood, and their younger brother Se-ha (Shin Ha-kyun) and his body-conscious younger brother, Dong-gu (Lee Kwang-soo). . Seha, who is physically disabled, acts as a substitute for thinking and judgment for Dong-gu, who has the level of intelligence of a child. Two people, who have been living together for a long time, understand each other's shortcomings with a broad mind, find out each other's needs perfectly, and become indispensable by their side.

The story of the two, which conveys pleasant laughter and warm emotions, surprisingly started from real people. The story of these people who spend 24 hours together and share a deeper friendship than brothers is one step from the existing films dealing with the relationship between the disabled and non-disabled people, such as <Brother>, <That Only My World>, and <Untouchable: 1% of Friendship>. Furthermore, it is new in that it puts two people with different disabilities at the fore. In addition, while the existing films with disabled people as the main characters mainly used the characteristics or weaknesses of the disabled in their circumstances, <My Special Brother> emphasizes the way two people with disabilities live in the world as one. It conveys the message of warm life. The film's message, 'The weak are actually stronger than the strong because they can be together' suggests a way to live together in a modern society divided by egoism and cynicism, approaching the audience with a warm human comedy and laughing and courage.

There are also true stories like this in the world!
The true story of two people who lived as brothers and as one body
The movie <My Special Brother> is a dramatized story based on the true story of Seung-gyu Choi, who is physically disabled, and Jong-ryeol Park, who is intellectually disabled, who have lived as one body for over ten years. The two met for the first time in 1996 at a welfare center in Gwangju and were nicknamed 'strong glue'. One became the head and the other became the body, filling each other's gaps and living like brothers. In 2002, for Choi Seung-gyu, who entered the Department of Social Welfare at Gwangju University, Park Jong-ryeol pushed a wheelchair for four years and handed over bookshelves to the classroom. received

Shin Ha-kyun, a god of acting with 20 years of acting experience and 40 characters that he has been through so far, has achieved an unquenchable heyday, from the recently finished drama [Bad Detective] to the movie [Extreme Job], which was loved by 16 million viewers. have. In this work, he plays the role of 'Seha', the older brother who uses his hair a little, and shows off his acting skills. Seha is a physically disabled person who cannot move under her head, but she has a clear brain and a non-stop talk. It was not an easy challenge for him to act emotionally, relying solely on changes in facial expressions and lines with minimal movement. Moreover, since the only free part of Seha's body was her mouth, she had to always speak quickly and accurately. Because of this, Shin Ha-kyun created a character by sharply using the lines he spit out like a rapid-fire cannon with more accurate pronunciation and dialogue than ever before.

From the drama [It’s Okay, That’s Love] to ‘Park Soo-gwang’ with Tourette Syndrome, ‘Yeom Sang-soo’, a passionate police officer in [Live], and ‘Yeochi’, a former cyber investigation team ace in the movie ‘Detective: Returns’, he has built up his character as an actor. Lee Kwang-soo, who has solidified the In <My Special Brother>, he shows off a perfect chemistry with Shin Ha-kyun as his younger brother Dong-gu, who uses a little body. Dong-gu has an outstanding talent for swimming, and he is the hands and feet of Se-ha hyung 24 hours a day, but without him it is difficult to judge. As director Yook Sung-hyo said that he believed in Lee Kwang-soo's sensibility and cast as a character who has to express his emotions with actions, facial expressions, and eyes rather than words, he melts into the character of Dong-gu and makes him shed pleasant smiles and tears throughout the running time. In addition, Lee Kwang-soo, who worked hard on swimming practice for 4 months for a character who likes to swim and mastered the role, was able to create a more vivid character.

Esom, an actress who has represented the diverse faces of youth in the drama [Because This Is My First Life] and the movie <Little Princess>, takes on the role of Mi-hyeon, Se-ha and Dong-gu's best friend and job seeker in this work. The image of Mihyun becoming a real friend next to Seha and Donggu is also the gaze of the audience wiping out their prejudices against them, so Esom tried to blend more naturally between them. Here, he goes back and forth with all kinds of part-time jobs, and for the role of a 100% job-hunting student with a sense of reality, he removes makeup and adds naturalness to it. I did my best to complete the character.

A brilliant collaboration between actors Park Chul-min, Kwon Hae-hyo, Gil Hae-yeon, and Jo Yeon-jin
The powerful supporting actors with Shin Ha-kyun, Lee Kwang-soo, and Esom further enhanced the film's perfection. Actor Park Chul-min plays the brother's strong supporter and social welfare official in charge of 'House of Responsibility', 'Joosa Song', and actor Kwon Hae-Hyo plays the role of 'Father Park' of 'House of Responsibility', the brother's home, bringing laughter and vitality to the dismantling play. put it in In the role of 'Jeong-soon', Dong-gu's biological mother, who appeared after 25 years, actress Gil Hae-yeon, who perfectly digested the character of a real mother in last year's drama [Pretty Sister Who Buys Me Food], left a strong impression, and made the story richer.

with different disabilities
Meet the true story of two men's lives
The movie <My Special Brother> is a project that started from the planning of the production company Joy Rabbit (CEO Ha Jung-wan), and was completed after 6 years of development with director Yoo Sang-hyo and Myung Film (representative Eun-eun Lee, Jae-myung Shim). Regarding the reason for starting the project, CEO Ha Jung-wan said, “Two men were living as each other’s body and head. It was impressive to see the real people live bright and hard to the extent that prejudice against people with disabilities disappears.” Real people met in Gwangju to discuss filmmaking, came up with ideas with an active attitude, and asked to make a movie with the message 'Even the disabled are members of the world.'
<A room? Director Yook Sok-hyo, who received favorable reviews for his warm humor about the socially underprivileged through his previous works such as Banga! Director Yook Sok-hyo, who was immediately drawn to the subject as soon as he heard the subject, suggested that he want to adapt this story into a comedy genre. He said, "When I met a real person to write a screenplay, the two people helping each other felt very bright. The back view of the older brother and younger brother pushing the wheelchair left a strong image in my mind.”

3 years of scenario work
do one's best
The production team, who thought that since it was based on a true story, had to contain more sincerity, worked on the screenplay for about three years. Together with director Sok Sok-hyo, writer Na Hyun (screenplay for <Glamorous Vacation>, <The Best Moment of Our Lives>, and <Hen Out of the Yard>), Lee Soo-ah (screenwriter <Law of Sensuality>, winner of the 2012 Lotte Scenario Contest), and writer Jeong Il (Myung Film) rap scenario major).
In addition, we were more careful as we dealt with the stories of people with disabilities. From the scenario development stage, we sought advice from people with disabilities organizations such as Nodeul Night School for the Disabled (Nodeul Night School) and Ilsan Sarang Self-Reliance Center for the Disabled on the real life of the disabled, as well as detailed scenes of the scenario, and was monitored during the editing process to complete the final version.

Myungfilm X Joy Rabbit
100% Reliability Created by the production team!
The movie <My Special Brother> is the ' of Myungfilm' and <Thinking of My Brother>, the film companies that made <I Can Speak>, <Cart>, <Introduction to Architecture>, <The Best Moment of Our Life>, and <JSA>. Joy Rabbit' is a collaborative work. The collaboration between Myung Film and Joy Rabbit, which has made high-quality films by bringing uninterested stories and alienated materials to the screen, shined even more because it was <My Special Brother>, a film about the friendship of two men with different disabilities. The production staff who have had a long relationship with Myung Film joined here to enhance the film's perfection. Cinematographer Seung-taek Seong, Lighting Director Lee Soon-jae, and director of <Cyrano; Art director Kim Young-hee, who participated in the works of “Love Manipulators”, “Paju”, and “The Murder Case of Paradise Island”, has a relationship with famous films such as “Cart”, “Introduction to Architecture”, “Hen Out of the Yard”, and “Hello, Hyung-ah”. Music director Lee Ji-soo, editorial director Kim Sang-beom, who has been working on a number of Korean films as well as famous films for many years, and CEO Kim Seok-won of the sound company Blue Cap. The know-how of those who have accumulated experience in the film industry for a long time has solidified the direction of the production of this work and made it into a movie with fun and meaning.