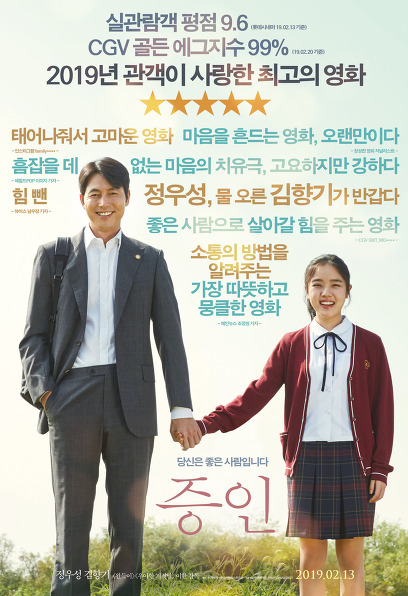 “I have an eyewitness. Must be autistic”

Soon-ho (Jung Woo-seong), a lawyer from a large law firm from Minbyon, decides to put his beliefs aside and become a snob for the sake of reality.
When he is named as a lawyer in a case that has a huge chance of being promoted to a partner's lawyer, he tries to prove the innocence of the murder suspect, the only witness, 'Ji-woo' (Kim Hyang-gi), an autistic girl.

“Are you going to use me too?”

'Ji-woo' is immersed in his own world and has difficulty communicating.
'Soon-ho' goes to 'Ji-woo' to ask about what he witnessed on the day of the incident, but he can't even greet him properly.
However, 'Soon-ho' tries to get closer to Ji-woo to hear the story of that day, and as time goes by, they understand 'Ji-woo' little by little, but now they have to face each other as lawyers and witnesses in court…

The moment you open your heart,
the truth has come

<Wandeuk> <Elegant Lies> Director Lee Han
A murder suspect's lawyer, and the only witness, an autistic girl
In the new year of 2019, there is only one movie that you can relate to.

Director Lee Han, who has been loved by a wide audience for solving the problems of our society with a warm gaze and delicate directing, is returning with the new year's film <Witness> in 2019. Multicultural through <Wan Deuk-i>, a film about the special mentoring of rebel child ‘Wan-deuk’ and ‘Dong-ju’ Oh, a teacher, and ‘Elegant Lies’, a film about a 14-year-old girl ‘Chunji’, who died without a word, finding the hidden secret. Director Lee Han, who has portrayed the wounds of relationships such as domestic and school violence with a warm eye, plans to move the audience's heart with a story of true communication through <Witness>, which depicts the story of two people who met as lawyers and witnesses of the case.

<Witness> is a movie about a lawyer named Soon-ho, who has to prove the innocence of a powerful murder suspect, and the only witness at the scene, an autistic girl named Ji-woo. Soon-ho, a lawyer from Minbyon, who has kept his beliefs for a long time, but has now decided to compromise with reality and become a snob. The movie <Witness>, which begins with Soon-ho, who becomes a lawyer in a murder case where his career is at stake, to establish as a witness the autistic girl Ji-woo, the only witness who holds the key to the case, <The Witness> tells the story of two people who can never get close. The process of gradually approaching each other is portrayed with a warm gaze, conveying a special impression. The process of communicating with 'Soon-ho', who approached 'Ji-woo' in order to win the trial, is comforted by the pure 'Ji-woo' and fills the hearts of the viewers with warmth. And the way 'Ji-woo', who was not good at communicating while concentrating on his own world, becomes a witness of the incident and gains the courage to communicate with the world, conveys a resonance of great amplitude. Like Ji-woo's question to Soon-ho, "Are you a good person?", the movie <Witness> makes you reflect on what kind of person I was in the mirror of others, and everyone who has become more accustomed to closing their hearts than opening them. It will heat up the theater district in the new year with a movie that wraps the hearts of people.

Jung Woo-sung & Kim Hyang-gi's first acting breath
The new acting transformation of the two actors with warmth
2019 New Year, the most fragrant meeting begins
The movie <Witness> is the first meeting of actor Jung Woo-sung with a unique presence and Kim Hyang-gi, who received attention for the <Along with the Gods> series, and expects the most warm and special synergy in 2019. Jung Woo-sung, who has captivated the audience with his bold and charismatic performances such as 'Han Kang-shik', the next-generation prosecutor candidate in <The King> and 'Eom Chul-woo', the top North Korean agent in <Kang Cheol-bi> It conveys a new charm with a character that is sympathetic and sympathetic. Soon-ho, who is in charge of a case in which he has an important opportunity to be promoted to a partner lawyer at a large law firm, meets the only witness, 'Ji-woo', an autistic girl. raise the level Jung Woo-sung, who expressed his special affection for the work, said, “I thought that it would be a film that could warmly take care of the tired hearts of the audience and at the same time be able to heal itself.” It will draw sympathy by portraying the character 'Soon-ho', who is looking for his original form, with a deeper emotion.

<My heart… >, <Snowy>, and <Elegant Lies>, and received a lot of love from audiences of all ages and genders by digesting a wide range of characters, and recently mobilized 26 million viewers in the <Along with the Gods> series. Kim Hyang-gi, who won the Best Supporting Actor award and proved her solid acting skills, challenges a special acting through <Witness>. Kim Hyang-gi, who said, "I tried to show the character 'Ji-woo', who has the pure power to move people's hearts," perfectly expressed the 'Ji-woo' character through fierce preparation and delicate acting. Kim Hyang-gi, who captures Ji-woo, who tries to communicate with the world, with clear eyes and unique pure charm, leaves an unforgettable afterglow and deep resonance with his special acting that does not miss a single gesture or glance. The new transformation and breathing of Jung Woo-sung and Kim Hyang-gi, who played two characters who communicate with their hearts, from the unfamiliar first meeting to the process of gradually opening and understanding their hearts to each other It will be a gift.

Lee Kyu-hyung, who has been completely immersed in his character in dramas [Wise Prison Life], [Secret Forest], and [Life], took on the role of Hee-jung, a prosecutor in charge of the case. Lee Kyu-hyung is a prosecutor 'Hee-jung' who knows how to communicate with 'Ji-woo', exudes a warm chemistry with Kim Hyang-gi, and shows a special breath with subtle nerve battles with Jung Woo-sung, whom he met through a prosecutor-lawyer relationship. The role of Mi-ran, a housekeeper who has been pointed out as a potential murder suspect, is played by Hye-ran Yeom, who has been performing from the movie "I Can Speak" to the drama [Goblin], adding to the tension of the play that is difficult to predict. Here, Jang Young-nam, who showed an irreplaceable presence in each work, takes on the role of 'Hyeon-jeong', the mother of 'Ji-woo', and is the third mother-daughter breathing with Kim Hyang-gi following <A Werewolf Boy> and <Snow Road>. Jang Young-nam perfectly portrayed the character of a mother who wants Ji-woo to communicate with the world just like any other child with her unique vivid acting. In addition, Park Geun-hyeong, an actor with deep and solid acting skills, who has appeared in more than 200 works for over 50 years, silently supports the child from behind, from the playful appearance of urging a confrontation to send his son to the marriage after disassembling as 'Gil-jae', the father of 'Soon-ho'. It realistically shows the heart of a sincere father, and evokes deep sympathy. And actress Song Yoon-ah, who has been performing various performances between the CRT and the screen, adds strength to the solid casting line by taking on the role of 'Soo-in', an old friend who worries about and takes care of 'Soon-ho' who is adjusting to his new life at a large law firm. <Witness>, filled with trustworthy actors such as Jung Woo-sung and Kim Hyang-gi, Lee Kyu-hyung, Yeom Hye-ran, Jang Young-nam, Park Geun-hyeong, and Song Yun-a, will communicate with the audience with colorful charms and emotions that will make you smile.

<The Attorney>, <Taxi Driver>, <The Duke>, <I'm Going to Meet You>
100% reality production completed by the best production team in each field
2019 New Year, warm emotions on the screen
With a talented production team representing Korea, including cinematographer Lee Tae-yoon, music director Jo Young-wook, art director Kang So-young, and costume director Kim Jeong-won, <Witness> put forth an effort to capture the reality and warm sensibility of the contemporary era.

Cinematographer Lee Tae-yoon, who was well-received for completing heavy images with sophisticated yet restrained camera work in <The Attorney> and <Gwanghae, the Man Who Became King>, based on the storyline prepared in advance in detail, it is a filming that captures the actors' minute expressions and vivid air. It increased the immersion of the play. In particular, the film's highlight, the court sequence in the second half, does not stop filming in line with the editing, but goes through the process of filming the actors' performances from various angles several times from beginning to end, and capturing the emotions of the actors and the sound of the scene intact on the camera. paid In addition, the POV (Point of View) shooting technique was introduced to realistically realize the chaotic appearance of the world from the gaze of 'Ji-Woo', an autistic girl. Use it to add vibrancy. Music director Jo Young-wook, who participated in <Taxi Driver>, <The Attorney>, <The Duke>, and <Inside Men>, meticulously expresses the emotions of the characters, while creating the atmosphere of <Witness> with a dramatic and emotional melody that touches the hearts of the viewers. completed Art director Kang So-young, who works with director Lee Han for the third time following <Wandeuk> and <Elegant Lies>, participated in art. In order to realize a space based on reality, the art team created the office set of the law firm where ‘Soonho’ works, in a high-rise building overlooking the real Gwanghwamun Square. increased realism. In addition, in consideration of Jiwoo's character who concentrates on his own world, the cozy details of a small tent like his own secret space were added to the interior of the room. The dramatic feeling was emphasized through the structure of the circulation and the arrangement of windows that relieve the feeling of frustration unique to the courtroom and allow the effect of light to be seen. Costume director Kim Jung-won, who participated in <I'm going to meet you now> and <Missing: The Missing Woman>, wore clothes that fit the character, from the change in the suit style of Soon-ho, who is adapting from Minbyun to a lawyer at a large law firm, to clothes that capture the innocence of Ji-woo. Naturally, realism was given to the play. In this way, the film <Witness>, which was completed with the efforts of the best producers in each field, from filming, music, art, and costumes, is a warm spectacle that moves the viewer's heart and doubles the sensibility of the film.