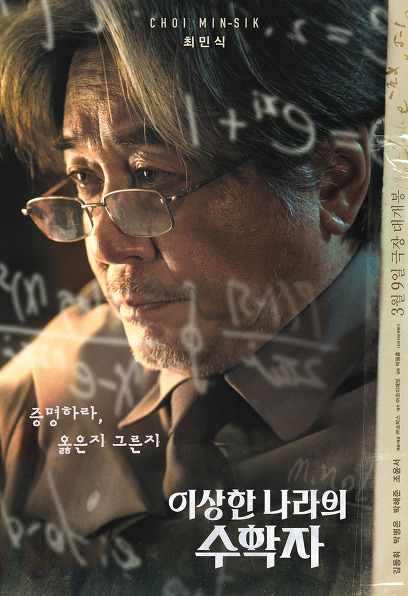 Hak-seong Lee (Min-sik Choi), a genius mathematician who defected from North Korea longing for academic freedom.
He hid his identity and story.
He lives as a security guard at his own high school, where the top 1% of gifted people gather.

With his cold and blunt expression, 'Lee Hak-seong', the number one target for students to avoid,
One day, after discovering his identity, he insists on teaching him math.
He meets ‘Han Ji-woo’ (Kim Dong-hwi), a high school student who has given up math.

To 'Ji-Woo Han', who was wandering in a world looking for only the right answer.
Teach you how to find the right solution
‘Lee Hak-seong’ also faces an unexpected turning point in his life.

Director Park Dong-hoon said, "While envisioning <Mathematicians in Wonderland>, I remembered the image of parents giving warm encouragement to a child who could not achieve their goal, rather than urging them." Also, applying the famous American mathematician John von Neumann's famous saying, "Do you not believe that mathematics is simple? you will soon believe If you realize how complicated life is,” he says that there is no single correct answer in life. “It is a film that asks questions about the fundamentals of life. As Choi Min-sik said, “The question about the right life and the worth living is contained in the scenario”, the figure of ‘Lee Hak-seong’, who awakens the value of the correct solution process, which is more important than the correct answer, conveys a special message in line with the present age and conveys a warm echo on the screen. will be.

In addition, <Mathematicians in Wonderland> is expected to provide fresh stimulation to the audience by solving the subject of mathematics in a realistic and interesting way. Mathematics in everyday life was expressed in a familiar way so that even the audience of 'Unknown' can fully feel the emotion and fun of the movie, and experts from a screenwriter who was a reporter from the Ministry of Economy to a professor of physics mobilized to improve the perfection. Writer Lee Yong-jae, who first wrote the screenplay, draws attention as a journalist who graduated from the Department of Economics at a media company and a fund manager at a securities company. Based on his experiences, he completed a scenario that featured mathematical expertise, such as the Riemann hypothesis and the Pythagorean theorem, and helped actors to understand the scenario more easily. In addition, the production team increased the mathematical trust by receiving pre-scenario advice from a physics professor, and a math expert was present at the filming site to prepare for possible errors.

<Mathematicians in Wonderland>, solidly completed with the efforts of experts in each field, will captivate the audience with a special story that conveys warm consolation to life and the joy of mathematics.

Great actor Min-sik Choi, take control of the screen in 2022!
Perfectly transformed into a genius mathematician with a secret
Delivering warm messages that solve life's challenges

In 2022, Lim In-nyeon and Choi Min-sik, the representative actor of Korea, will return to the screen after 3 years. Actor Choi Min-sik, who captivated the audience with his unparalleled performances in major works such as <I Saw the Devil>, <War Against Crime: The Golden Age of Bad Guys>, <New World>, and <Myeongryang>, was cast in <The Mathematician in Wonderland>. He plays the role of Hak-seong Lee, a genius mathematician who defected from North Korea.

'Lee Hak-seong' is a character who left his hometown to study mathematics freely, not for political purposes. However, I am disappointed with the reality in Korea where mathematics is only used as a tool for college entrance exams. So, while he is living a dry life while hiding his identity and story, he meets 'Ji-woo Han' and begins to solve the answers to life one by one through mathematics. Choi Min-sik will show off his acting skills that connect his previous works once again by digesting various aspects, from the genius of memorizing difficult mathematical formulas to the appearance of an adult throwing a message of hope and consolation for life.

In addition, Choi Min-sik is scheduled to perform in the North Korean dialect for the first time in 22 years since the movie <Shiri> to express the character. Choi Min-sik, who said, “I tried not to miss the fact that North Korean defectors try to use a lot of South Korean language and the accent they use,” said Choi Min-sik. it was

Director Park Dong-hoon, who directed <The Mathematician in Wonderland>, said, “From the moment I read the scenario, I was convinced that actor Min-sik Choi would complete the energy of the work. have. He has great character interpretation ability and extensibility, so we learned a lot while working together.”

Choi Min-sik, a great actor who scrambled to the screen like this, will color the theater district with warm emotions in the spring of 2022 with heavy energy and sincere acting.

Kim Dong-hwi, who was selected through a 250 to 1 competition,
Park Byeong-eun and Park Hae-jun, who showed unrivaled screen dominance, even the shining newcomer Jo Yoon-seo!
Fresh chemistry of actors who created fantastic synergy

In <Mathematicians in Wonderland>, Kim Dong-hwi, who was selected through a 250 to 1 competition, to actors Park Byung-eun and Park Hae-joon, and newcomer Yoon-seo Jo are expected to join.

First of all, Kim Dong-hwi, a 'monster rookie' who gained a lot of attention through [Secret Forest 2], played 'Han Ji-woo', a disciple of 'Lee Hak-seong', a genius mathematician who defected from North Korea. He is a 'desperate' of Korea's top 1% private high school, but he is gradually growing through a special meeting with 'Lee Hak-seong'. Director Park Dong-hoon said, "Kim Dong-hwi was 'Ji-woo' himself when he auditioned," and revealed the perfect synchro rate as the reason for the casting, raising expectations for his acting.

‘Geun-ho’, the homeroom teacher of ‘Han Ji-woo’, was played by Park Byeong-eun, an actor who left a strong impression on each work. He is a person who only cares about the grades and advancement of his students. Park Byeong-eun, who meets Choi Min-sik for the second time in the work following <Special Citizen>, is expected to portray the face of 'Geun-ho' with the opposite view of 'Lee Hak-seong'.

Actor Park Hae-joon, who freely moves between the screen and the CRT, plays the role of 'Ki-cheol', the only friend who takes care of 'Lee Hak-seong'. Expectations are high that he will be equipped with a soft charisma that is 180 degrees different from his sharp confrontation with Choi Min-sik in <Silence>.

Director Park Dong-hoon said, "They were all actors I wanted to work with at least once, and when we worked together, they had a very high control over the screen. They are the actors who gave the movie more energy than expected.”

Lastly, the role of 'Boram', the only friend of 'Ji-Woo Han', was played by Yoon-seo Jo, a rookie who showed off her fresh charm in the drama [Main]. Director Park Dong-hoon, who had a difficult time casting the role of 'Boram' before meeting Jo Yoon-seo, said, "I had a meeting with Jo Yoon-seo, and while reading, I decided, 'Oh, I found it'. After seeing Jo Yoon-seo, I thought that the agony of the past was not the time to find this friend.”

As such, the fresh breath of actors Kim Dong-hwi and Jo Yoon-seo, and veterans Park Byeong-eun and Park Hae-jun, whom Chungmuro is paying attention to, further doubles expectations for <Mathematicians in Wonderland>.

From 'Pi (π) Song', a performance song made with the perimeter, to Bach's unaccompanied cello song!
Complete the story of a brilliant melody!

In <The Mathematician in Wonderland>, music plays an important role as another character. Various music such as 'Pi Song', which expresses mathematics through music, to 'Hak-Sung Lee' character and an unaccompanied cello song that makes mathematics more familiar, melts into the right place for the movie, providing another fun.

From the pre-production stage, the production team avoided the familiar orchestration of string instruments as much as possible and utilized a variety of instruments regardless of genre. It is for free expression that escapes the stuffiness and rigidity felt by repeating familiar sounds. The production team created a colorful soundtrack with ideas from music composed by Coldplay's [Life In Technicolor] and BTS' [Euphoria], Philip Glass of the movie <The Hours>, Trent Rezner of <The Social Network>, and John Williams. created The drum sound heard when 'Lee Hak-seong' cheers for 'Han Ji-woo' is one of the sounds created using such free expression and various instruments.

Among these, the music that cannot be left out of <Mathematicians in Wonderland> is 'Pi Song'. 'Pi Song' is a song made by adding a note to pi (π), which is the circumference, and is used in the scene where 'Hak-seong Lee' proves the beauty of mathematics to 'Ji-woo Han', who has difficulty with math. Director Park Dong-hoon, who said that he felt great charm in expressing mathematics musically and put a lot of effort into filming the performance of 'Pie Song', showed strong confidence, saying, "It is a part where the audience can also feel the pleasure of discovery." In addition, Jo Yoon-seo, who appeared in the role of 'Boram', adds to expectations by saying that he practiced the piano for 6-7 hours every day to play 'Pie Song'.

Lastly, Bach's unaccompanied cello song flowing from Hak-Sung Lee's house shows the charm of 'Hak-Sung Lee' in reverse. This scene tells the audience that 'Lee Hak-seong', a mathematician who only felt hard, is a person who loves art, and that mathematics is as beautiful as art. Also, 'Han Ji-woo''s act of considering 'Lee Hak-seong' to listen to good-quality songs is also an opportunity to bring the two closer together.

In <Mathematicians in Wonderland>, various spaces appear, such as classrooms and hideouts in the school, and the houses of 'Hak-seong Lee' and 'Ji-woo Han'. These spaces are delicately crafted with different concepts according to their use.

First, the classrooms and hideouts in the school are the main art concept and shooting concept, and were created as the most prominent spaces in the movie. The school was implemented in a flat manner by lowering the contrast with an achromatic white tone to express the top 1% private high schools in Korea that enforce a uniform order.

On the other hand, Science Hall B103 Hideout, where 'Scientific Science' conveys a message about mathematical pleasure and life, has been made into a more three-dimensional space by increasing the contrast between light and dark. The hideout, which is also the most painstakingly crafted place by the production crew, mainly uses amber tones to give a dark yet warm and warm feeling. As director Park Dong-hoon's intention, "The hideout was filled with eerie but mysterious objects and made into an unknown space that gives the feeling that 'anything can happen'" It was reborn as a mysterious hideout where miracles can happen. In addition, director Park Dong-hoon added an unconventional sense of openness by visually realizing the space behind the blackboard where the camera could not be located for the writing scene.

Lastly, the houses of 'Hakseong Lee' and 'Jiwoo Han', which are important places, were produced with a similar concept. Both places are dry, empty, and desolate spaces. This represents the psychological state of 'Lee Hak-seong' and 'Han Ji-woo' and was created by reflecting the opinions of all the staff including the cinematographer, art director, and lighting director.

As such, the spaces in <Mathematicians in Wonderland> are set and changed depending on the meaning of the space and the person who uses it, which will double the fun of watching the movie.