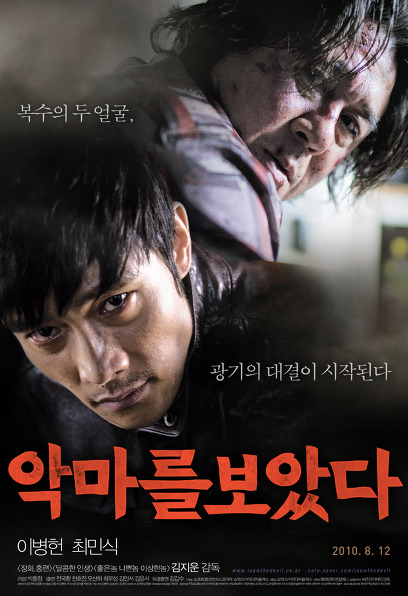 A demonic serial killer and…
A man who lost his fiancee to him and wants to pay him back for the pain
Their mad showdown begins.
When the NIS bodyguard, Soo-hyeon (Lee Byung-hun), was brutally murdered by her fiancee, Joo-yeon.
With shame and anger for not being able to protect the person most important to him
He vows the most painful revenge.

However, Jang Kyung-cheol, a murderer more vicious than the devil,
Enjoying the appearance of an equal enemy that I met for the first time in my life, I begin to counterattack…

Is it because of the starting point of making a movie I want to see? The fascination with the genre always came before anything else. However, <I Saw the Devil> is a film that puts the emotions and actions of two men who suffer in the name of revenge rather than the power of the characters at the core. The raw energy that comes out when madness like an active volcano collides with madness like ice, from the perspective of a fan before being a director, Choi Min-sik, who is like a fireball, and actor Lee Byung-hun, who is curious about the end of his detailed expressive power. wanted As the title suggests, <I Saw the Devil> begins with a man who lived an ordinary life unexpectedly meeting a demon-like man and killing his fiancee. So, this movie is a pain-sharing play, a religious play in that it fights against the devil, and a suffering play in that it is a man's heartbreaking pain. It could be a pure love story about a man who vowed to get revenge. But before that, I hope that the audience will enjoy watching the magic and extreme character performances created by the two actors meeting on the set. Also, with the exhilaration of an entertainment movie watching two men actually give and receive a brutal and intense revenge that everyone dreams of but cannot put into practice, why do some live as demons and others as ordinary people? Where the hell did it go wrong? where am i going now I hope it will be a movie where you can think about the same thing at least once.
Director Kim Ji-woon

The meeting of three men representing the Korean film industry
A new and intense thriller is born!
Director Kim Ji-woon is a director who is not represented by one genre. He has never made a work of the same genre until a total of 5 feature films and 4 short films. Comedy, horror, noir, western, etc. The fact that it is the work of one person is surprising, he has stepped into a new field every time and has excited the audience with his unique style. This time, he presents a thriller film through <I Saw the Devil>. His unique style, which always puts the modifier 'Kim Ji-Woon-Pyo' in front of the genre, is expected to give the Korean audience another unique experience.
In addition, Choi Min-sik, who is gladly reunited for the first time in 12 years after his feature film debut <Quiet Family>, appeared in his third film following <Sweet Life> and <Nom Nom Nom>. Two representative actors play the main theme of murder and revenge.
<I Saw the Devil> stimulates anticipation for a new and intense thriller, how director Kim Jee-woon will change the unique grammar of a thriller film, how the synergy of the three hot men will be expressed.

The best big match on the screen in 2010, Lee Byung-hun VS Choi Min-sik
Their mad showdown begins!
Actor Choi Min-sik is so strong that the word charisma becomes a cliché. Five years after <Mr. Kind Venus>, the audience had to put up with their thirst for actor Choi Min-sik or a 'strong' character with personality and power that only he could do. Choi Min-sik, who returns after 5 years as a villain called a serial killer who enjoys killing in I Saw the Devil, will quench that thirst.
<Nom Nom Nom> <GI Joe> <I come with the rain> <Iris>. Beyond the screen and TV, of course, to Hollywood and Japan. Literally world star Lee Byung-hun. The character he will call out in <I Saw the Devil> is a man who loses his fiancee to serial killer Kyung-cheol and wants to return the pain.
“The director who makes this film, Choi Min-sik, who exudes primal masculinity, and Lee Byung-hun, who has delicate expressiveness. As one of the fans, I am looking forward to the sparking performance of the two people in sharp contrast.” As director Kim Ji-woon's crank-in impression, the hot and intense energy of the two actors is expected to heat up the summer of 2010 even hotter.

Killing is not revenge!
A different kind of revenge drama <I Saw the Devil>
The two main pillars of <I Saw the Devil> are a serial killer and a man who dreams of revenge. There are a lot of movies with the theme of serial killers and revenge, and it is a setting that is not unusual considering the reality that more cinematic things happen than in movies. However, <I Saw the Devil> approaches the familiar theme of 'revenge' in a new way.
Soo-hyeon pursues a murderer who brutally murdered her fiancee. The tears shed in front of the body of a loved one were hot, but his revenge was colder than that of a serial killer. He does not seek revenge by killing the criminal, but moves with the will to bring back the pain suffered by his lover. As the play progresses, Soo-hyeon changes into a cool figure that constantly inflicts pain and releases it so as not to die.
Kyung-cheol is also a person who enjoys controlling other people's lives and commits savage murders, but there is more to it. While being lynched to death by Soo-hyeon, Kyung-cheol, who enjoys confrontation with him, and wants to take revenge on Soo-hyeon again, is quite different from the serial killer character in the existing movies.
Contrary to the general pattern of finding cinematic fun in the mystery and thrill of catching the criminal, it is for this reason that the tension in the play rises even though the identity of the killer is already revealed at the beginning of the movie.
Through <I Saw the Devil>, the audience can experience a unique cinematic experience where they can feel the suffocating tension by riding in the workshop of two three-dimensional and attractive characters, unlike the general viewing experience that takes the side of justice based on the simple distinction between good and evil. will be able

“I will give you back the same way you did” / 'A man who sees the end of revenge' Kim.Soo.Hyun.
Kim Soo-hyun, the head of the National Intelligence Service's security team, brutally murdered by a serial killer. His job is to protect someone, but his shame and anger at not being able to save the murder of the person he loves the most turns him into someone else. Soo-hyeon begins a maddening revenge with a determination to return the pain as it is, not just revenge that ends in death.

"you… You touched me wrong” / 'Serial killer like the devil' Jang.Kyung.Chul.
Jang Kyung-cheol, a serial killer like the devil. Murder is the moment when he feels alive. He is chased by Jooyeon's fiance, Soo-hyeon, who was his victim, and is in the position of a victim for the first time in his life. It was the first time that he had met an equal opponent who was against him. In the end, Kyung-cheol accepts Soo-hyeon's mad revenge as a game and repays the pain in his own way.