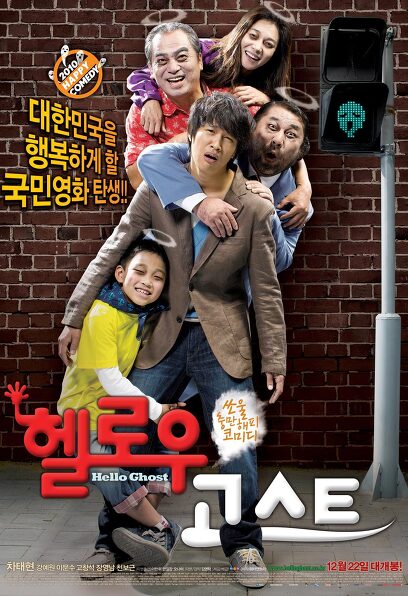 A strange soul has entered me! It's also four…
Sang-man (Cha Tae-hyun) is a lonely man whose wish is to die. One day, a ghost begins to appear in him.
Perverted ghosts, clingy ghosts, crybaby ghosts, and elementary school ghosts that stick together like leeches.
A ghost asks for a wish and Sang-man is unable to die because of them.
In the end, while their wishes are granted, they come face to face with the best moment of their life…

This Christmas, Ghosts who will make your soul happy are coming!

The birth of a 'soul-full happy comedy' that turns over after laughing!
The decision of the main/supporting actors and investors is completed in a week with a highly complete scenario!!

Korea's representative comedy appeared in 2008's <Speeding Scandal> and 2009's <7th Grade Civil Servant>. The soul-fulfilling happy comedy <Hello Ghost>. This work is a soul-fulfilling happy comedy in which Sang-man (Cha Tae-hyun), a man who wants to die because he is lonely, meets the best moment of his life while granting the absurd wishes of the ghosts. The screenplay of this film, written by director Kim Young-tak, who is in charge of directing, contains an attractive story that captured the heart of Cha Tae-hyun, who has already decided on his next film. <Hello Ghost>, which attracted the attention of filmmakers from an early age, also drew attention as the decision of the main/supporting actors and investment companies was completed in a week only with the power of a highly complete scenario.
<Hello Ghost> is an exciting drama based on a 'ghost scandal' that is intertwined with ghosts, with witty humor. This movie, which contains a message of support that comforts everyone behind the comedy, is a comedy that will warm the hearts of all those who are lonely and exhausted, just like director Kim Young-tak's ambition to create a 'comedy that makes you feel happy while laughing without a mind'. will be

Korean 'Jim Carrey' Cha Tae-hyun's '5 roles per person' comic acting!
Pay attention to everything from his facial expression, speech, gestures, and ad-libs!!
Cha Tae-hyun challenged five roles for the first time in Korean film history. After returning alive from the threshold of death, 'Sang-man', played by Cha Tae-hyun in <Hello Ghost>, sees a ghost and shares his body with four ghosts who ask for a wish. In the process, Cha Tae-hyun plays the role of 5 roles per person according to the setting in which 4 different ghosts are possessed in addition to his actual character, 'Sang-man'.
From 'perverted grandpa' who lights up alcohol and women to 'a badass ghost' who smokes all the time, 'storm tears' who cries for fictional days, and 'shikishinchoding' who has no habit and likes sweets, dozens of times a day, his body is inflicted on his body. Cha Tae-hyun, who had to play the role of 'Sang-man', who is not at all comfortable because of the ghosts who come in and out, observed each character's actions, tones, and facial expressions in detail. As a result, he perfectly digested the five roles of one person to the extent that the modifier of 'Jim Carrey of Korea' is not insignificant. You will be able to confirm the true value of the actor Cha Tae-hyun through his comical acting, which he completed with more focus on character research than any other movie.

From <Speeding Scandal> Cha Tae-hyun to <Haeundae> Cheon Bo-geun, the casting of 30 million dreams!
Check out the synergy of Korea's top box office actors!!
<Hello Ghost> is definitely notable for its brilliant casting, with all the actors who have led the success of Chungmuro for the past two to three years. Cha Tae-hyun, who drew 8 million viewers with his previous work <Speeding Scandal>, is undoubtedly the best box office maker in Korea. The four Ghosts, who cling to Cha Tae-hyun's body to fulfill their wishes, were also filled with luxury actors boasting a splendid box office history as the 1st place in Chungmu-ro casting.
Oh Chang-seok of <Sister Brothers>, who mobilized 5 million viewers earlier this year, Chang-seok Koh, a crybaby, 'Storm Tears,' Jang Yeong-nam, of <7th Grade Civil Servant>, who drew 4.5 million viewers, and 'Grandpas in Pervert', which attracted 2 million viewers. Good Morning President Lee Mun-soo and Cheon Bo-geun of Haeundae, who achieved a myth of 10 million viewers in 'Sikshin Elementary School', transformed into ghosts with strong personalities and performed enthusiastically. If Kang Ye-won, who received attention as a next-generation actress through <Haeundae> and <Harmony>, joins them, the audience alone will exceed 30 million. Just seeing the synergy with the acting ensemble that the top-grossing actors recognized by the audience gather in one place will be enough reason to watch <Hello Ghost>.

There is no such thing as a ghost in the world!
Unprecedented nuisance ghost 'G4' A new ghost character is born!!
In <Hello Ghost>, unprecedented ghosts appear in any movie. They are the annoying ghost G4 that clings to 'Sang-Man' to fulfill their wish, 'Perverted Grandpa', 'Crazy Ghost', 'Storm of Tears', and 'Sikshin Elementary School'. Unlike typical ghosts, these people, who are united with a very human charm, are responsible for the laughter in the movie and add to the fun of watching the movie.
What makes these characters unique above all else is that they have a lifestyle unique to G4. First, you can only make your wishes come true by borrowing a human body, secondly, you can only answer questions you ask, thirdly, you are afraid of other ghosts even though you are a ghost, and fourth, it is polite to take off your shoes when visiting someone else’s house, and finally The point is that once you stick to it, your wish will surely come true without ever falling off. As such, unlike general ghost movies, those who do not feel the ghost's force even in their lifestyle, provide laughter with their quirky charms, and feel more human than humans are the only ghosts that have never been seen in Korean film history. will be.

>> ISSUES 1. Ghost, how many people have you carried?!
A unique wire that can only be seen in <Hello Ghost> 'Go and get scene'!!
While filming <Hello Ghost>, director Kim Young-tak's biggest concern was how to capture the image of 'Sang-man' with four ghosts clinging to the camera. CG was the easiest way to describe the situation in which three ghosts were carried one after the other on Sangman's back, and a choking ghost was hanging from one leg. However, director Kim Young-tak, who wanted to go analog rather than flashy CG from the beginning, chose to actually hang the actors using multiple wires that he had never tried before. 'Go and lose scene' is a scene in which Cha Tae-hyun crosses a crosswalk in that state. Capturing this on camera was more difficult than I thought. First, a large crane was needed to move the four wires at the same time, and for this, it was necessary to arrange a crossroad site that could control traffic throughout the day. Lee Moon-soo, Ko Chang-seok, Jang Young-nam, and Cheon Bo-geun, who took on the role of G4, had to endure the arduous filming of crossing the crosswalk in line with Cha Tae-hyun's footsteps while hanging wires and it was difficult to float in the air. In particular, it was so unfamiliar to the special effects team that had to adjust the force by repeatedly pulling the wire so as not to break the balance of the four people, so it did not go smoothly. Moreover, both the actors and staff were exhausted from the continuous shooting under the scorching sun in August, when the heat wave continued. The unique wire 'Go and Go Scene' of <Hello Ghost>, which was completed after such trial and error and hard work, will remain as a famous scene that cannot be seen anywhere else.

>> ISSUES 2. Episodes in the props of memories?!
Behind-the-scenes stories from pony, a famous car of memories, to giant koi are revealed!!
Memories of props appear in <Hello Ghost>, adding to the fun of watching it cutely. First, the national car Pony, which represented Korea in the 1970s. The art team, which had to get a yellow pony on a special order from director Kim Young-tak, was able to find a pony car that matched the warm atmosphere of the movie after looking at several old car rental stores. In the movie, Pony appeared as a taxi, so a taxi had to be mounted on top of the vehicle, but since it was a car that was treated with respect due to its increased scarcity value, it was not allowed to attach any additional devices. Reluctantly, the prop team fixed taxis with tape every time they were filming, and when filming a scene running on the highway, the staff and actors all had to treat the fixed taxis carefully so that they did not fall off as a temporary measure. Another memorable accessory is a huge carp-shaped candy given to the 1st prize in the stationery shop lottery. In the movie, this giant carp candy, which 'Sikshin Elementary School' shows a strong obsession, is not an edible candy, but a plastic model specially made by a sculptor with a carp-shaped frame. Cheon Bo-geun, who plays the role of 'Chicken Choding', who has many similarities to the actual figure, swallowed his saliva when he first encountered this prop, but when he actually started filming, he experienced a difficult experience because of the musty smell and taste of giant carp taffy. had to

>> ISSUES 3. Kang Ye-Won, the story behind the scenario change?!
Fascinated by Kang Ye-won's real charm, he changed his character to a lively 'Yeonsu' character!!
Kang Ye-won as Yeon-su, a hospice nurse in <Hello Ghost>. In director Kim Young-tak's screenplay, 'Yeonsu' was a character with a dark and rough personality and a skinny body, but with a more beautiful voice than anyone else. However, with Kang Ye-won's casting, 'Yeon-su' changed into a different character. It started in May, before filming began, at the first reading site of the scenario. To wake Cha Tae-hyun from the hospital, he said, “Hey. When I heard Kang Ye-won's voice saying, "Open your eyes," and Cha Tae-hyun's narration, "You're so pretty," her unexpected husky voice caused laughter in the hall. With this as an opportunity, director Kim Young-tak revised the screenplay, and deleted the line about Yeonsu's 'appearance' in the scenario due to Kang Ye-won's natural body. In addition, new episodes were added by adding to Kang Ye-won's lovely and quirky charm. As a result, the character of Yeonsu, who was only dark and rough, was born into a more three-dimensional and lovely character as she met an actress named Kang Ye-won and gained more and more vitality.