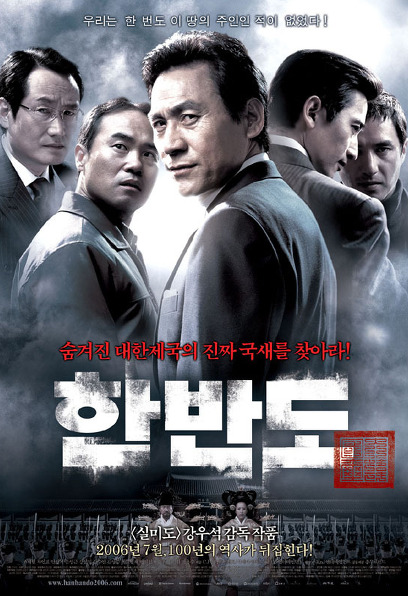 “Japan will not permit the opening of the Gyeongui Line railway on the Korean Peninsula.”

South and North Korea promise to reunify and promote the first symbol of this, the complete opening ceremony of the Gyeongui Line railway.
However, Japan obstructed the opening ceremony based on a treaty with the Korean Empire in 1907.
They pressure the South Korean government to withdraw all technology and capital that has flowed into the Korean Peninsula.

Dr. Choi Min-jae (Cho Jae-hyeon), who has been treated as a heretic in the historical world for claiming that there is a "hidden national seal of King Gojong," is convinced that if he finds the national seal, he can overturn Japan's deterrent claims. The president (Ahn Sung-ki), who came to believe in his conviction, announced the emergency martial law due to the appearance of the Japanese Self-Defense Forces in the East Sea, and at the same time finally formed the 'National Secretariat Excavation Committee' and puts his last hope on Choi Min-jae…

“It’s just a seal… The seal of a country that was ruined a century ago!”

Prime Minister (Moon Seong-geun), who has been at the forefront of national stability and smooth relations with Japan rather than reunification, must stop the 'national bird' commotion, which only creates trouble. In the end, Lee Sang-hyeon (Cha In-pyo), secretary of the National Intelligence Service, who is close to him, interferes with the excavation of the national bird and takes extreme measures that if it is found, it will be removed, and if necessary, Choi Min-jae may also be removed… Japan's provocations are getting stronger and the crisis from 100 years ago is about to repeat… Does the national bird exist? So, should I find the national bird?

The biggest and most enjoyable imagination in Korean cinema history
In July 2006, the 'Korean Peninsula craze' is coming after 'Dae-Han Min-guk'!
The 2002 World Cup fever was a joy shared by the people of the country, and another myth will be created in 2006. However, we cannot rely on the joy of the World Cup forever. The unresolved Dokdo dispute, the past that needs to be addressed… The movie <Korean Peninsula> will lead the 'Korean Peninsula craze' following the World Cup craze with the greatest and most enjoyable imagination in Korean film history that overturns 100 years of history.

“Is this a movie? Is it real?”
The 'Cool Korean Peninsula Project' that will be responsible for the summer of all Koreans!
The movie <Korean Peninsula> is a full-fledged faction blockbuster Korean film that crosses the tragic Korean Empire, which lost its country to Japan 100 years ago, and the Republic of Korea, which is facing a crisis again in the face of a second national invasion that prevents the opening of the 'Gyeongui Line' and unification! It is a 'confidence recovery project' for the people of the whole country who have been hurt and cored by the recent Dokdo incident, and a 'Korean Peninsula project' for this summer that will cool our hearts!

There are no twinkling stars! However, the 'eternal actors' came to the rescue!
Best casting for just one scene! This is a true blockbuster!
The best actors in Korea have gathered for the movie <Korean Peninsula>! However, the actors agree that the main character of this film is different. The main character of the movie <Korean Peninsula> is the 'Korean Peninsula' and the 'audience'. Director Kang Woo-seok chose the best actress Kang Su-yeon for just one sequence because the role was 'Empress Myeongseong'.

Inside the Blue House as it is! Real military operation shooting reminiscent of actual battle!
The first Korean movie 'The Korean Peninsula Project' is definitely different!
The stage of the movie <Korean Peninsula> was the entire 'land, sea, and air of the Korean Peninsula', which stretched from the downtown palace and the Blue House to the East Sea and the air. Even a single shot of the outside scene of the Blue House was actually filmed, and actual military operations were filmed with the support of the Ministry of National Defense, and naval and air battles that were reminiscent of actual battles were captured on camera. In addition, the explosion scene of the government complex filmed while controlling the 12th lane of Gwanghwamun will be a masterpiece that will make you sweat.

Seoul Gwanghwamun and Gyeongbokgung Palace, Andong Hahoe Village, Jinhae Naval Base,
In addition to Seosan Air Base, Jeonju, Incheon, Paju, Ilsan, Wanju, Buan, etc.
A six-month long journey through the 'land, sea, and air of the Korean Peninsula'!
Actual filming of 'Dorasan Station' for the opening ceremony of 'Gyeongui Line'
The first open to the private sector since the construction of the station, 1,200 extras!

<King Kong> <Gladiator>
Equipment used for high-level special shooting, overseas staff participation
Zero shake even when shooting on board or in an airplane!