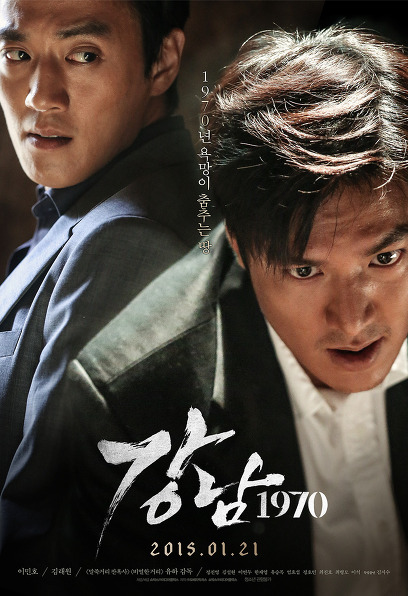 In 1970, a dangerous desire for the land of Gangnam begins to dance!
Jong-dae (Lee Min-ho) and courage (Kim Rae-won), orphans with no proper family register, lived a life of scavengers and lived like brothers. Even the small shack in the unlicensed village, which was their only haven, is taken away, and the two become entangled in an operation to sabotage the convention involving thugs and lose each other there.

“Ball of the earth, courage of money! Let's go all the way to the end!”
Three years later, Jong-dae becomes a gangster with one dream of living well, contrary to the wishes of Gil-soo (Jung Jin-young), a former gang leader who accepted him as a family member. Jong-dae, who jumped into the struggle for the right to develop Gangnam with Madam Min (Kim Ji-soo), who is the stomach of the head of information and power, is reunited with the courage to become the middle boss of the Myeong-dong faction, and the two men are involved in the political realm of loyalty, conspiracy, and betrayal. battleground. You will be placed in the middle…

Every creator inevitably has a nuclear experience faced with a sensitive period. For me, Gangnam corresponds to such an original experience in a double sense of space and time.

Gangnam, where I first encountered when I moved in 1974, was a bizarre space where agricultural culture and urban culture collide to the extreme. With the development of Gangnam booming, new-style Western-style houses, yellow and golden waves, and houses that were falling apart coexisted, and the alma mater in <Malejukgeori Cruelty> also had migrants and native children sitting side by side at their desks. And at some point, the natives were pushed further south and left school in the form of dropouts or expulsion.

Moments when I met a student and a scavenger on the way to school. The idea of making a movie about the stories of those friends who later became known as street vagrants came to my mind towards the end of <Maljuk Street Cruelty>. Then, as I came across [Story of Seoul Urban Planning], which introduces the political secrets of the Gangnam development plan, <Gangnam 1970> began to approach me with a concrete reality.

Korea's low-income capitalism, where money became the most valuable thing on earth. I met the scavengers and the Orange people, who are the bare faces of those extremes, in Gangnam, and as I continued walking between the extremes, I tried writing and making films as a guard.

Since puberty, when the violence of military culture dominated, and high school, when being a male and being forced to be masculine, he has dealt with how institutional education nurtures violence through <About Cruelty>. If it deals with how this violence is consumed, <Gangnam 1970> deals with the story of power consumption of violence.

However, the theme that runs through the 'Street Trilogy' is still the coexistence and collision of the two themes of violence and youth, a distorted portrait of youth who cannot but wander on the streets without being incorporated into the center.

<The Horseman Street Cruelty> <Mean Street> and <Gangnam 1970>
Director Yoo Ha's 10-year street trilogy is complete!
<Gangnam 1970> concludes director Yoo Ha's 10-year street trilogy. It's been 10 years since I've drawn young people who are violated by the violence of institutional education in <The Story of Cruelty>. It has been 8 years since Mean Streets showed how money consumes violence. <Gangnam 1970>, the finale of director Yoo Ha's street series, sheds light on the 1970s, when the development of Gangnam land was just beginning. Two young orphans, Jong-dae and Courage, fight for their lives as activists of political power at the forefront of the struggle for rights over Gangnam. As such, <Gangnam 1970> is a drama where youth meets violence, and shows the theme consciousness of the street series on the largest scale among the trilogy. The 'Street Trilogy' is the 'Gangnam Trilogy' in that it is set in 'Gangnam,' Seoul, which has become a symbol of wealth in Korea, and the 'Street Trilogy', which is also a 'Youth Trilogy' in that it is a portrait of young people who wanted everything without what they had. Director Yoo Ha finally puts an end to the 10-year long journey with <Gangnam 1970>.

Director Yoo Ha, who reborn a star as an actor, meets Lee Min-ho and Kim Rae-won!
Rugged men rushing through the screen with their desire for land and money! <Gangnam 1970>
Lee Min-ho and Kim Rae-won are different. Director Yoo Ha has already reborn young male stars as actors, such as Kwon Sang-woo of <A Cruel Street> and Jo In-seong of <Mean Street>. In this <Gangnam 1970>, Lee Min-ho and Kim Rae-won were transformed into rough men running with a desire for land and money.
Director Yoo Ha cast Lee Min-ho, who is familiar with the heiress of a chaebol in the drama, as Kim Jong-ro, a young man who only has fighting skills. He pushed actor Lee Min-ho into the middle of life-threatening real action. Lee Min-ho of <Gangnam 1970>, who acts without hesitation and anger with bitter eyes, can no longer remember his tears in front of love. Lee Min-ho's rough masculinity, who traverses the screen, is unfamiliar but full of welcome charm.
Kim Rae-won also shows a complex charm with the ability to not look back and the courage to do anything to succeed in the fiercely organized world. From being a scavenger despised by the world to becoming the second leader in the organization, from emotional acting that is always tense and anxious, to real action acting by showing actual skills, actor Kim Rae-won of <Gangnam 1970> shows that he is taking another leap forward. <Gangnam 1970> will give you the pleasure of watching the transformation of two young actors, Lee Min-ho and Kim Rae-won, on the big screen.

Real action parade <Gangnam 1970> such as bathhouse action, national convention action, warehouse action
Filming period 1 week, 150 people per person! Face to body face-to-face without a side in the mud!
Director Yoo Ha's principle of action directing that "any movie should exist for the sake of action" developed into vivid action scenes with a 'raw' smell on a larger scale in <Gangnam 1970>. The action scene in the process of Jongdae and courage hitting the members of the opposing team gives a more gritty and heavy aftertaste than any other emotional scene. In addition, the sequence of gangsters mobilized in the opposition party convention destroying props and hitting chessboards shows a realistic fight that real gangsters would do with wooden and iron pipes.
Among the 'action sequences moving toward the desperate goal of survival' in <Gangnam 1970>, the highlight is the 'muddy action' in the cemetery. Director Yoo Ha wanted to show the desperate faces of men risking their lives to roll in the mud in this scene that marks the fate of the two men in the story. Accordingly, the production team created a space by hunting down the hills in Damyang, selecting the land for about a month, and covering the soil over it. For realistic action, Steady Cam was selected and filming was carried out as a long take, and 150 actors were filmed in the muddy rain for 12 hours a day for a full week. Filming without a double meant that the actors had to come and go to the hospital with constant injuries and mud poisons, and "Are there no injuries?" became the director's signature after each take. The fact that Lee Min-ho was given an anesthetic injection even though he was injured in a claw lift is a good example of what kind of war the actors of <Gangnam 1970> fought to create real action. It was raining so much that the enemy and allies were indistinguishable, and in the muddy mud where it was not easy to even walk, Lee Min-ho and Kim Rae-won and all the actors rolled up and flew away. Following the rooftop action of <The Horseman Street Cruelty> and the goo-dari action of <Mean Street>, the 'Muddy Action', which can be remembered as the signature scene of <Gangnam 1970>, was born that way.