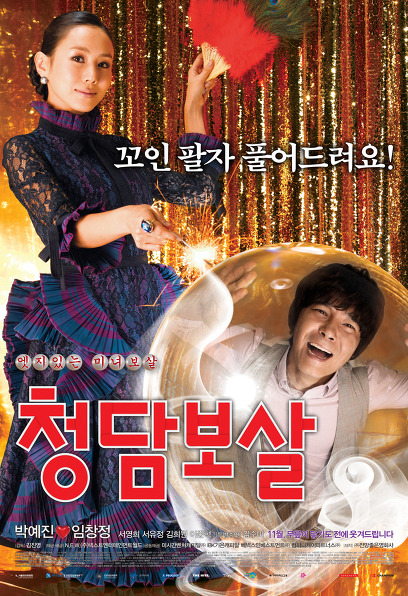 Guryongsan received the clean energy and took a big place in the luxury Cheongdam-dong
Because she had a sexy figure, charismatic eyes, and a beautiful bodhisattva..
The name he dared to even put in his mouth was Cheong.Dam.Bo.Sal!

Tae-rang, a beautiful bodhisattva known to be used in Cheongdam-dong. She has a straight face, a billion-dollar salary, and nothing to envy, but she was born with a trajectory to avoid bad luck only by meeting a man of fate 28 years ago. One day, in a miraculous (?) accident, he meets Seung-won, a shy man who doesn't want to even look at him, and his first love, Ho-jun, who doesn't want to be seen.

Oh God! Are you kidding me now?
If only I could avoid fate, I'd ride a jokdu barefoot!

1. Ingenious! It explodes! It's ridiculously funny!
Comedy season winter,
The fateful comic romance that the audience has been looking for is coming!

In 2009, when laughter is thirsty, the audience is eagerly waiting for a movie that will make you laugh. Here's a comedy movie that satisfies your thirst for laughter, ready to go in front of the audience. The movie <Cheongdam Bosal> where Park Ye-jin and Lim Chang-jung meet and perform the strongest comic couple acting!
<Cheongdam Bodhisattva> predicts the best comical romance movie this year, or the best ever, with a novel character called a new generation bodhisattva and a character with 100% comic synchro rate, a fantasy about fateful love and unexpected reversal of life.
<Cheongdam Bodhisattva>, which continues the genealogy of comic films that exploded every winter, such as <Beauty is Suffering> and <Speed Scandal>! Winter 2009 <Cheongdam Bodhisattva>, which will write a new history in Korean comedy movies, is coming! Wouldn't it be the best comedy to raise the emotional temperature with laughter in the cold winter?

2. Everyone's interest
With everyone watching, the fateful mating begins!
The fact that the Korean store market is worth a whopping 3 trillion won a year is an example of the fact that fortune-telling is very popular and closely related to real life. My fate that everyone is curious about, and the fate that everyone has seriously thought about at least once.
Here is a woman who is a fortune teller with tweezers, but doesn't know where her relationship is. And he hesitates in front of the person he finally met. The comedy of <Cheongdam Bodhisattva> begins with the irony that the Bodhisattva, who believes that all good fates and bad fates are set fortunes, desperately rejects that fate. And it is a comical story about the fate and relationship between a man and a woman that may have been decided.
Do you want to know your destiny? Should I believe in fate? Can I go against fate? The answer will be clearly explained in <Cheongdam Bodhisattva>.

3. This is image casting! The strongest comic couple is born!
Park Ye-jin, possessed by Lim Chang-jung's character!
The hot issue of <Cheongdam Bosal> is the return of Lim Chang-jung, the main pillar of Korean comic films, and Park Ye-jin as his new partner.
In the meantime, Lim Chang-jung has shown her innate sense of comedy through <Color Immediate Construction> <Great Legacy> <1st Street Miracle> <Meeting Square>, while actresses acting with him such as Ha Ji-won, Kim Seon-ah, Ko So-young, and Park Jin-hee are floating. also created For this reason, the comical compatibility with Park Ye-jin, who has been recognized for her comical sense by earning the nickname of sweet and bloody Ye-jin-ah through 'Family Outing', is attracting the audience's expectations.
Lim Chang-jung's comfortable and natural truth behind the story and laughter of her sincere and warm life, and Park Ye-jin, a fortune-teller with a perfect billion-dollar salary, who doesn't know her limits, is perfect for a new generation of bodhisattvas in Cheongdam-dong, as if possessed by a character. The perfect couple acting between the two will be the signal of a comedic film revival.

4. The blockbuster comic corps is coming!
From comic godmother Kim Su-mi to Yang Taek-jo, Seo Young-hee, Seo Yu-jeong, Kim Hee-won, Lee Jun-hyeok…
Die for the sake of being funny!
Kim Su-mi, who is called the godmother of Korean comic films through <Mapado> and <Family Series>. In this movie, she appears as a brave fortune teller who taught her daughter Tae-rang how to accept her fate from an early age and gave her a divine message. Ad-lib, her own special move, gives a powerful laugh that makes Lim Chang-jeong, who says she doesn't even snort at any humor, and adds a famous scene that will remain in the comic book genealogy.
Here, actor Yang Taek-jo, who would be embarrassed by the second sense of comedy, speaks the savvy Chungcheong-do dialect and plays Lim Chang-jung's father, who has a firm belief that 'good things are with family, difficult things are completely alone' .
In addition, Seo Young-hee, Seo Yoo-jung, and Kim Hee-won, who appear as members of Gangnam's best fortune teller Fortune Salon, show off the comic aura that they have been honing in not only movies, but also sitcoms and dramas, and are empowering the laughter of Park Ye-jin and Lim Chang-jung.
In addition, Lee Jun-hyeok, who imprinted his face on viewers only with his handsome looks through <Cho Gang Ji-cheo Club> and <City Hall>, appeared as Tae-rang's first love. There will also be competitions for body gags, such as showing off acting.
The funny (?) performances of the actors who risked their lives with one thought to forget their age and image and to be funny!
Now, it is only a matter of time before the nation loses its navel.

5. Forget about cameos so far!
This is truly a cameo corps!
In <Cheongdam Bosal>, not only veteran actors, but also comedians, reporters, and managers, many celebrities who are considered to be Korea's best have appeared in cameos, which doubles the fun of watching.
Park Mi-sun is looking for love with a younger man who is close to her nephew, Hyun-young is the affair of her boyfriend, Hwi-soon Park is a man suffering from jinxes, and broadcaster Eva and actress Jung Soo-young are looking for Cheongdam Bodhisattva because of unresolved love.
In addition, Jung Sung-hwa, a musical actor, appeared as an employee of an accident handling insurance company, and gave a short but impactful smile with a realistic expression. In addition, Park Myung-soo's manager, Jeong Seok-kwon, also appeared as Born on May 16, 1978. This is thanks to the wide network of director Kim Jin-young, who has been acquainted with the broadcasting and film scene for over 15 years, the positive energy of many people towards <Chungdam Bodhisattva> made the film more enjoyable.