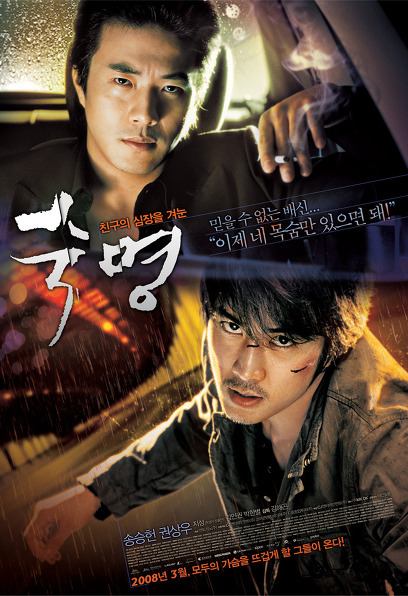 Four friends who were united by fate and swept the world of darkness,
After the casino heist is misguided by betrayal, fate turns them into enemies.
Now, their unavoidable battle begins, aiming at each other's hearts

The devious desires of four friends united by fate, the mismatched friendship

Four friends, Woomin, Cheoljung, Dowan, and Younghwan, who swept the world of darkness with their strongest team play.
When hotly united, they were the strongest. The four friends seemed to succeed in stealing the money bag perfectly in the casino heist that they had planned for their new start.
Until the unbelievable betrayal of the iron man turns things around!

Unbelievable betrayal and misunderstanding… they became enemies
If there is no turning back, this time see the end!
Woo-min feels anger at all the situations that have gone awry due to the betrayal of Cheol-jung.
Cheol-jung, who betrayed his friends and fulfilled his desires to succeed in a cold world.
Do-wan, who dreams of a comeback, and Young-hwan, who is always quietly looking after his friends.
And even Eun-young, a woman from Woo-min, who got caught up in the whirlpool of four men's fate.
A constant misunderstanding between them leads to misunderstandings, and their fates are irrevocably deviated.
And, they bump into each other at the site of the largest port trafficking on this floor for different purposes… Now, the inevitable battle against fate begins!

Song Seung-heon, Kwon Sang-woo, Ji Sung, Kim In-kwon and Park Han-byul
Casting of top star actors representing Korea
The movie <Fate> is a hot topic that is attracting a lot of attention at home and abroad just because Song Seung-heon and Kwon Sang-woo, the protagonists of the Korean Wave, both in Korea and across Asia, met. Here, you can meet five charming stars on one screen, from the unique acting actor Kim In-kwon, to the star actor Ji-sung and the fascinating Hong Il-jeom Park Han-byul. The meeting of these star corps, who each challenged their acting transformation with intense and impressive characters, creates the best synergy and presents a charm that cannot be taken away from your eyes. The synergy with director Kim Hae-gon, the actor's acting trainer, who maximizes their potential by overturning the splendid side of the stars who are called narrow-minded, is another reason to look forward to <Fate>. Four men confronted with an inevitable battle with fate and a woman caught up in their fate, they will shine brilliantly as the stars of the theater in the first half of 2008.

A heavy emotion that touches the heart, an intense story, and the stubbornness of a strong character
Unrivaled work <Sookmyung> in the first half of 2008
The second film <Fate> by director Kim Hae-gon, an outstanding storyteller who has touched the hearts of many with his strong characters and deep emotions. He turns his attention to the profound emotion that runs through everyone's life, 'the fate that cannot be avoided, that is, fate'. Through the lives and fates of the five intense protagonists… Characters who face different 'fate' towards their absolute goals are another aspect of us living in the present age, and the texture of the tangled events without any gaps makes it impossible to slow down the tension about their ending. The insistence on delivering 'story' and 'emotion' in a straight line rather than being buried in the customs of planned and genre films is a special reason why <Fateful> is positioned as one of the most unique Korean films in the first half of 2008.

Song Seung-heon, who returns as a strong man, and Kwon Sang-woo, who plays the villainous villain
The synergy created by their friendship and competition
In addition to the meeting between Song Seung-heon and Kwon Sang-woo, the movie <Fate> is raising expectations as it foretells the transformation of their acting that has not been seen before. Song Seung-heon, who made the hearts of many women flutter with his soft melodrama and sad tearful acting, is played as Kim Woo-min, a tough man with explosive wildness, and Kwon Sang-woo, who always keeps his own justice and loyalty, whether in action or comic, as Jo Cheol-joong, a brazenly cruel villain. From acting to outward appearance, he seeks a thorough change. Song Seung-heon and Kwon Sang-woo, who are close friends and well-intentioned competitors, are creating the best synergy. The sincerity and passion for the film and characters of the two actors, who have been dedicated to this work over the past year, will be delivered intensely to the audience.

Newly evolving Korean emotional action
“Action is also acting, not acting a lie!”
The action scenes in the movie are getting more and more splendid, thanks to the elaborately coordinated action, multiple cameras running at the same time, and meticulously calculated editing. However, <Fate> follows the character's emotional lines and presents an 'emotional action' that pursues reality by capturing the sincerity of the moment. The actors were also injured because they really hit, hit, and did not save their bodies, but with the passion of Song Seung-heon and Kwon Sang-woo, who did everything from high-level large-scale action scenes to body-to-body clashes without a set storyline, the passion of <Fatery> was added. > Your own true real emotional action has been completed.

Energy of scale and spectacle
“The moment you get emotional, the scale adds to the interest!”
If the harsh emotions of the back alley world in which the protagonists of <Fate Myung> live are alive in the story and characters, the colorful and colorful dynamism in that world is maximized through the spectacular pursuit and action sequences. The scale of the vehicle chase scene in which the entire six-lane road in front of Jeju City Hall is controlled and chased during the location shooting in Jeju Island, which took place for about a month, adds to the tension of the play. Also, the port trafficking site, the climax of the movie, was completed in a full week at the Suyeong Bay yacht in Busan. The port trafficking scene, which is also a scene where all the main characters collide again for different purposes, is a splendid attraction in <Sokmyung>, where motorcycles, dozens of extras, and vehicles are mobilized all over Suyeong Bay, such as on yachts and marinas. The powerful and dynamic camera movement and sensuous and sophisticated video will set it apart from the existing action movies and catch the eyes of the audience.

The dazzling rediscovery of top stars who met with director Kim Hae-gon, the actor's trainer
“We discover the deep path of life in the actors we love!”
Song Seung-heon, Kwon Sang-woo, Kim In-kwon, Ji Sung, Park Han-byul. Director Kim Hae-gon led the best trendy stars to the dead end of the most mean and bitter fate. Song Seung-heon's sorrowful wildness, Kwon Sang-woo's cold and mean poison, Kim In-kwon's horrifying eerie, intelligent eyes hidden behind a smile, and Park Han-byul's emptiness as a mature woman… Director Kim Hae-gon discovers new images of actors and boldly shakes off their existing images that have been imprinted on the public. Director Kim Hae-gon's directing ability to explain and persuade in detail not only the physical movement of the characters, but also the delicate emotional movement on the set, and the synergy created by the actors who worked with extraordinary passion make the movie "Fateful" even more anticipated.