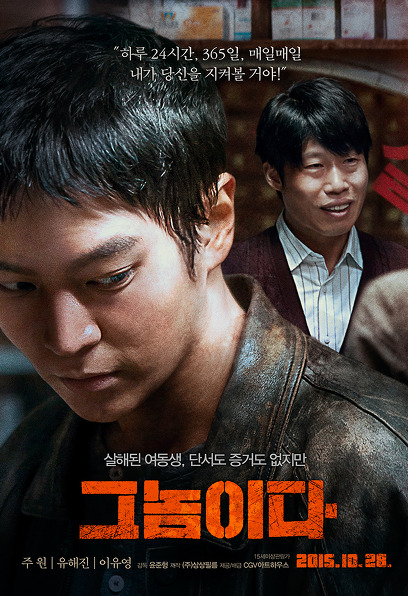 Jang-woo and Eun-ji are the only two families in the world. Jang-woo decides to move to Seoul for Eun-ji due to the redevelopment of the dockside village, but Eun-ji suddenly disappears and returns as a corpse in three days. Without any witnesses, clues, or evidence, Jang-woo, who is frantic about finding the culprit, is at Cheondojae to comfort his younger brother's soul. He accidentally finds a man standing where the bowl has gone. Jang-woo, who thinks that his dead brother has pointed out him as the culprit, begins to search for traces of him.

Si-eun, who lives like a loner in the village with the foresight to see the death of others, sees the death of Eun-ji, the only friend who spoke to her first, but turns away and approaches Jang-woo with a sense of guilt. Si-eun foresaw another death. Jang-woo follows the traces of the man who appeared in the place that Si-eun foresaw, until he arrives at a pharmacist at a local pharmacy, known for his kindness. Jang-woo believes him to be the culprit. The police ignore Jang-woo's story and arrest Jang-woo's distant relative as a suspect. When no one believes him, Jang-woo starts chasing the pharmacist…

Break the genre of thriller movies! Tension close to horror!
October 2015, a mystery chase that will tighten your heart is coming!

This coming October, a new thriller <It's the Gnome> that has never been seen before will meet the audience. The movie <It's That Guy> is a mystery chase in which a man who has lost his younger sister persistently pursues the criminal with the help of a girl who predicts death. Among the numerous movies released in October with the thriller genre, regardless of domestic and overseas, <It's the Gnome> declared the destruction of the genre of thriller movies with the novel and mysterious material of the work and the breathtaking tension like watching a horror movie, raising expectations. is heightening

The distinguishing point of <It's That Guy> is that while the story unfolds starting with the murder case, folk beliefs such as Cheon Do-jae and Soul Guidance and the mystery of a girl character who predicts murder are added. First, the persistent chase action between 'Jang Woo (Joo Won)' and the criminal completes the scenes full of urgency, providing tension that cannot be missed even a single moment. Here, the welcome of 'Si-eun (Lee Yoo-young)', a girl who sees death, not only provides a fresh flow of the story, but is in exquisite harmony with the desperate struggle of 'Jang-woo', a man who has lost his one and only family, tightening the hearts of the audience throughout the running time. Is expected. In particular, the relationship between the three characters 'Jangwoo', 'Min Pharmacy', and 'Sieun' in <It's Gnome> is a point of observation that deserves more attention. The relationship between 'Jang-woo', a man who staked everything on catching the criminal, 'Min Pharmacy', who is suspected of being the criminal, and 'Si-eun', who predicts another death, reaches its climax as the story unfolds, and the audience becomes the central axis of the case. If you move into the 'Jangwoo' in charge and follow the reality of 'The Guy', you will be able to fully enjoy the thrill of <It's the Guy>, which is persistent and persistent. As such, <It's the Gnome>, which is expected from the audience as a mystery chase drama that tightens the hearts of the audience, is scheduled to captivate theaters this fall as soon as it is released.

The best actors unite!
Actors Joo Won, Yoo Hae-jin and Chungmuro Blue Chip Lee Yoo-young!
The movie <It's That Guy> is a work that is already gathering anticipation from the audience even with the meeting between Joo Won, a popular Korean actor, and Yoo Hae-jin, a famous and trusted actor. In particular, as the two actors work together for the first time through this work, curiosity about the acting combination they will show is amplifying, Lee Yoo-young, who is emerging as a blue chip in Chungmuro, will also join forces to create a richer story. First of all, actor Joo Won, who debuted as a musical actor and is active on stage as well as on the cathode ray tube and screen, shows a variety of appearances. took on the role. Joo Won, who revealed the reason for choosing the work, said, “It is a character and genre that I have never tried before,” and put in a lot of effort, such as deliberately gaining weight and learning dialect acting to perfectly digest the character. In the first half of 2015 alone, actor Yoo Hae-jin, who perfectly digests different characters from <Top Secret Investigation>, <Minority Opinion>, and <Veteran>, plays the role of 'Min Pharmacy', a man pointed by her dead brother as the culprit. . The character of 'Min Pharmacy', which shows from the good-natured appearance of a pharmacist gaining the trust of the villagers to the confrontational relationship with 'Jang-woo' who doubts him, was able to be reborn as a more three-dimensional and deeper character by meeting Yoo Hae-jin. Actress Lee Yoo-young, who debuted in the film <Spring> in 2014 and won the Best Actress Award at the Milan International Film Festival, announced the birth of a new monster, played the role of 'Si-eun'. 'Si-eun' is a mysterious girl who foretells a murder case in the village, and helps 'Jang-woo' find the culprit who killed her brother. Lee Yoo-young, who left a strong impression on the audience by presenting a completely different image for each work, will perfectly digest the unique character in this <It's the Guy>, and solidify her position as a promising star in Chungmuro. The perfect combination of performances by these talented actors is expected to satisfy the audience's expectations 100%.

A mysterious story that started from a true story!
The birth of an irreplaceable, incomparable mystery chase!
The mystery chase drama <It's Gnome> is based on a true story, and is expected to draw more attention from the audience. A mysterious story that cannot be believed to be an actual event, and realistic descriptions of Cheondojae and Soul Guts will add depth to the story and offer a different charm that could not be found in existing thriller films.

The story of <It's a Gnome> is based on what happened in Cheondojae, which commemorates the death of a female college student in the beach town of Cheongsapo, Busan in 1999. At that time, the main character of Cheondojae was a female college student who was suddenly found dead on the beach, and the culprit was unknown. When the final ceremony, the soul-geon-gi-gut–the ceremony of throwing a brass bowl full of rice in a red cloth toward the sea to eat on the way to the afterlife–is in progress, a strange thing happens. It floated down and stopped in front of a young man. The father of the deceased college student saw this and was intuitively convinced that the young man was the culprit. However, seeing this indescribable mysterious thing as the driving force behind the persistent and persistent pursuit of the case, director Yoon Jun-hyung decided to make this story into a movie. Here, the director was able to complete a deeper and richer story by adding the character of 'Si-eun (Lee Yoo-young),' who foretells a murder case. In this way, <I Am Gnome>, which depicts the events and mysterious phenomena that can actually happen around us in a realistic way, is announcing the birth of a new genre that is irreplaceable and incomparable when a deep story and three-dimensional characters meet.

** What is Cheondojae? A ritual that comforts the dead and leads them to the world of paradise