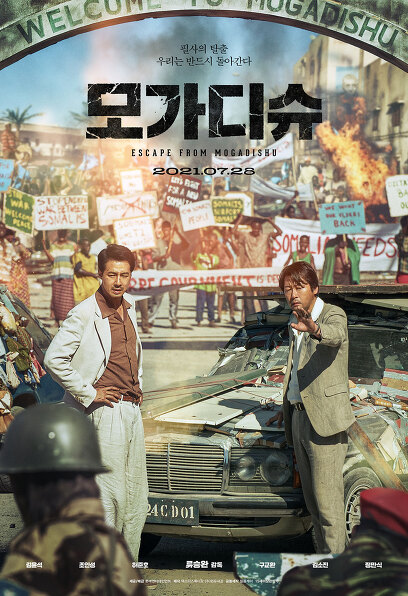 Unfamiliar city isolated by civil war, Mogadishu
From now on, our only goal is to survive!

A time when South Korea was struggling to join the UN
In 1991, civil war broke out in Somalia's capital, Mogadishu.
The staff and their families of the South Korean embassy, who were isolated in a place where communication was cut off,
In the midst of a rain of bullets and shells, they endure each day to survive.
Then one night, a group of people from the North Korean embassy knocked on the door asking for help…

One goal is to escape from Mogadishu!

1991 Somalia civil war
Escape at the risk of life or death for the isolated people
A preview of a movie that everyone should experience in 2021!

<Mogadishu> is a movie about the life or death of those isolated in the 1991 civil war in Somalia's capital, Mogadishu.

1991, which is the background of the movie era, was a time when Korea was not yet a member of the UN. Korea, which had been calling for globalization through the 1986 Asian Games and the 1988 Seoul Olympics, attempts to join the UN to gain recognition from the international community. Since membership is decided by the votes of UN member states, it was very important which country one vote for Somalia would go to. South Korea and North Korea are engaged in an all-out diplomatic battle to appeal for their respective support. At that time, North Korea had no choice but to have diplomatic superiority with African countries because it started foreign diplomacy 20 years earlier than South Korea. In Somalia, civil protests are beginning to sprout that will eventually lead to an outrageous civil war.

In the beginning of Mogadishu, Ambassador Han Shin-seong (Kim Yun-seok) of the Korean Embassy and Counselor Kang Dae-jin (Jo In-seong), an intelligence agent from the Ministry of Security and Public Security, are in the lead, the ambassador's wife Kim Myung-hee (Kim So-jin), secretary Gong Su-cheol (Jeong Man-sik), clerk Su-jin Jo (Kim Jae-hwa), and youngest clerk It depicts the process of promoting Korea as if heading to the bare ground of Park Ji-eun (Park Kyung-hye). At that time, while they were living in a distant country, waiting for the day they would return to Korea as soon as possible, civil protests began to spread like wildfire into civil war due to dissatisfaction with the Barre dictatorship. As the situation reminiscent of war continues, the South Korean embassy is cut off from basic resources such as electricity and food, as well as contact with neighboring countries. Then one night, North Korean Ambassador Rim Yong-su (Heo Jun-ho), Counselor Tae Joon-gi (Koo Gwan-hwa), and North Korean embassy staff request rescue, and a tense accompaniment begins. They begin to come up with a self-rescue plan to go back to their homeland, transcending their country and ideology. <Mogadishu> tells the story of people who did their best to survive in this lie-like situation.

On the other hand, when filming a story that is unbelievable as a true story, the production team tried to preserve reality as the top priority. Culturally, Africa is too far away and Somalia is currently a travel ban, so it was more important to research beforehand due to limited access. At that time, the book materials of the president of Somalia’s state TV, photos of war correspondents, and advice from various classes, including Somali university students who came as exchange students in Korea, military experts, and professors of African-related departments, were of great help to the pre-production of <Mogadishu>. These pre-works were of great help as the film was based on a true story. Through these works, <Mogadishu> evokes a feeling of being in the middle of a civil war in the audience.

The dramatic story of those isolated in 1991 in Somalia's capital Mogadishu, finally met this summer, will provide an opportunity for the audience to experience.

First of all, Kim Yun-seok, an irreplaceable famous actor who has shown infinite character digestibility such as <1987>, <Sexual Murder>, and <Namhansanseong>, played the role of Han Shin-seong, the ambassador to Somalia, who is engaged in an all-out diplomatic battle in Somalia to join the UN. Kim Yun-seok, who was important in capturing the emotions of a person who has both the appearance of an ordinary family who wants to return to Korea and the responsibility of taking care of the embassy family in the midst of a civil war, approached Han Shin-seong carefully and passionately. <The King> and <Ansiseong> check the box office success Jo In-seong transformed into Counselor Kang Dae-jin, an intelligence agent from the Ministry of Security and Public Administration, who was dispatched to manage and support the Korean embassy. In order to complete a fresh character, he added new colors and breath, such as even immortalizing Konglish regardless of nationality. In particular, Jo In-seong's acting, who does not lose his composure even in an instant situation, helped to maintain the tension of the film.

Above all, <Mogadishu> is even more interesting as it is the first collaboration between Kim Yun-seok and Jo In-seong. Kim Yoon-seok said about Jo In-seong, "an actor who left his seniors and juniors and felt like a friend and colleague", and Jo In-seong about Kim Yun-seok, "I think the opportunity to act with Kim Yun-seok will be a turning point in my acting life. I am very grateful,” he said, expressing their love and respect for each other. Director Ryoo Seung-wan said about the collaboration between the two actors, saying, "Even though it's their first meeting, their efforts to cherish and take care of each other, as well as make each other shine, have been transferred to the film and captured on the screen."

In addition, Heo Jun-ho, who played the role of 'Rim Yong-su,' the North Korean ambassador who has been involved in diplomatic relations with Somalia for a long time, balanced the play by acting in a different color from various works such as the [Kingdom] series and [Innocence]. Actor Gu Gwan-gwan, who is paying attention in Chungmuro, appears as 'Tae Joon-gi', a counselor who is responsible for the safety of the North Korean embassy and is loyal to the country, stimulating the curiosity of the audience with a fresh character that he can digest. Kim So-jin, who transformed into Kim Myung-hee, the ambassador's wife, who actively tries to escape even in a crisis; Jung Man-sik, who plays the role of 'Gong Su-cheol,' a loyal Korean embassy secretary; They completed a unique combination by casting actors who have been active in movies and dramas.

In this way, the actors will put the audience in the middle of a civil war with an unforgettable performance, and share a desperate and urgent breath.

Producers who have been producing Korean films with high box office and high quality have gathered for <Mogadishu>. Director Ryoo Seung-wan and the production team of <Berlin>, which successfully performed overseas locations, gathered again to complete the expanded overseas city project in 2021.

First of all, director Ryoo Seung-wan and the production team worked hard on detailed data research to bring the situation of the 1991 Somalia civil war to the screen. To this end, a thorough research was conducted, from the records of the U.S. Navy at the time, articles from domestic diplomatic associations, and memoirs of the civil war ('Out of Mogadishu') of the then president of Somalia's state TV. We did not stop here, and under the advice of military reporter Tae Sang-ho, who participated in [Vagabond], I tried to realize <Mogadishu> by identifying the firearms used in the civil war in 1991.

In addition, the well-made production crew, including lighting director Lee Jae-hyeok, recognized around the world through outstanding works such as <Black Panther> and <Okja>, came together to create a scene full of heat. Lighting director Lee Jae-hyuk and cinematographer Choi Young-hwan, who showed a vividly immersive shooting style in various works such as <Veteran>, <Berlin>, and <The Thieves>, worked hard to create exotic visuals and experiential visuals that seemed to be in isolation. tilted To this end, he actively used Practical Light using the light of the scene and created an environment that seemed to be isolated in the real Mogadishu to capture the lively performances of the actors.

In addition, the biggest challenge for <Mogadishu> was to show a natural look without being awkward because it had to capture the figures of people living in an unfamiliar space. Art director Kim Bo-mook focused on enhancing realism. The interior of the embassy was realized through detailed settings such as arranging props airlifted from Korea in the Arab-style building structure. Martial arts director Yoon Dae-won personally recruited inexperienced actors living in the area to express the situation of the civil war and conducted action training every day. Although they did not communicate with each other, they realized a realistic situation as if they were in the middle of the Mogadishu civil war.

<Mogadishu>, where the production crews representing each field are showing synergy, will lead the audience to the site of Mogadishu, which is stained with endless civil war.

One of the elements that shows the overwhelming and exotic scale of the movie <Mogadishu> is by far the 100% all-location that took place in Morocco, Africa. Director Ryoo Seung-wan said, "The most optimal location for realizing Mogadishu, which cannot be reached now, existed in Morocco, and the on-site resources were also created at a level suitable for filming." . Kim Yun-seok also said, "I will never forget all of Morocco's exotic scenery and culture for the rest of my life."

In fact, the production team of <Mogadishu> went through a location hunting process in Africa for four months to find a space that could reproduce exotic scenery instead of Somalia, which was designated as a travel-banned country and cannot be visited. After much effort, the final filming location was confirmed in Essaouira, a Moroccan city with the environment most similar to that of real Somalia. It is rumored that a former Somali embassy employee also agreed that he had found the best location. In this way, 100% all-location is performed in a space that reproduces Mogadishu as it is, realizing the sense of scale and majestic atmosphere of the film, and the scenery itself plays the role of another main character in the film.

Meanwhile, for all these overseas shootings, the production team of <Mogadishu> worked with the local production team, as well as location manager Mohamed Benhmamane, who worked in various works such as <Mission Impossible: Rogue Nation>, <Born Ultimatum>, and <Gladiator>. Thorough preparations were made in advance. First of all, in order to create the same shooting environment as the screenplay, we not only received the government's cooperation six months before filming, but also focused on creating a space suitable for the background and the space of the movie by creating a concept suitable for the space through photo materials taken locally. They applied soil directly on the paved road to complete the Somali dirt road in the 90s, and realized the reality by reproducing the Somali architectural style on the Moroccan building. In order to fully capture the intense natural light of Morocco, the shooting was conducted in detail by time period, completing the culmination of an exotic landscape that is bound to be fascinated.

The <Mogadishu> team worked hard to overcome the barriers caused by language and cultural differences and capture the essence of all-location through overseas filming that lasted for about three months. <Mogadishu> is a film that realistically depicts the stories of people trying to escape by perfectly reproducing Somalia in the 1990s. The exotic scenery will make the movie more rich and will surely catch the eyes of the audience.