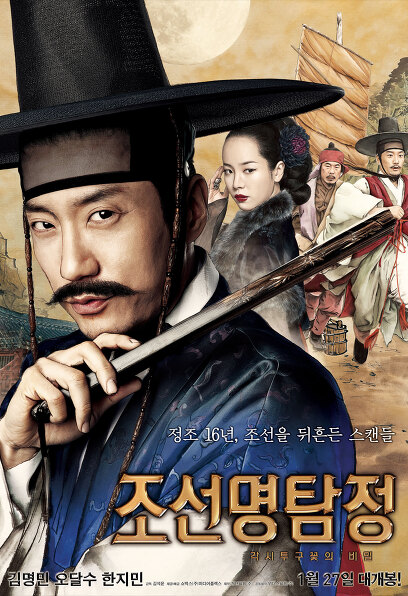 In the 16th year of King Jeongjo, a huge scandal that will shake up Joseon…
The best detective in Joseon is out!

In the 16th year of the reign of King Jeongjo, he guessed the conspiracy of the officials to hide the corruption of tribute, and gave a secret order to Joseon's best detective (Kim Myung-min) to find out who was behind the incident.
The detective, who was attacked by an assassin from the first day of the investigation, escapes the crisis with the help of the repairman Seo-pil (Oh Dal-su).
There, they meet Han Gaek-joo (Han Ji-min), who holds the key to the case while holding the top of the Joseon Dynasty…

The reality of a huge conspiracy is revealed as the secret is uncovered.
In January 2011, the first detective drama of Joseon is coming!

I hope you know whether the climate is peaceful in the autumn wind.
Yesterday's appeal was well received.
The murder case of Park Bong-dal and the serial killings of the savages are mourning.
But he answered my call and resolved the cases well.
Your brilliance deserves to be cherished.
Even though you were entangled in a strong Noron and stranded by this incident,
A moment of injustice will soon pass, so don't flirt easily.
In this case, it is considered that there will be a bigger conspiracy centered on the Jeokseong Gaksi Helmet Flower Farm.
I hope that you will go down to the aptitude and solve this case urgently.
Let them know that I am not ignoring the grim stories of the world.
And as soon as you see this letter, shred it and burn it.

Jeongjo's secret detective, the Joseon version of Sherlock Holmes is coming!
Joseon's first detective drama <Detective of Joseon>
A novel ambush that will inform the evolution of the Korean film industry has appeared. The first detective drama in Joseon was <Detective Joseon: The Secret of the Helmet Flower>. The film is set in the 16th year of King Jeongjo, and due to mysterious incidents surrounding the corruption of bureaucrats, King Jeongjo faces a major crisis. This is the story of the greatest detective in Joseon, who uncovers a huge scandal that shakes up Joseon. However, unlike a serious case, the movie depicts the process of solving the case in a cheerful and lively way by a detective who is a genius and a genius. It raises expectations for new genres and characters in that it presents a Korean-style detective character that can be compared with famous detective characters such as 'Sherlock Holmes' in the UK and 'Hercule Poirot' in the US. <Detective Joseon: The Secret of the Helmet Flower>, which blends two elements that do not seem to go well together, 'Joseon Dynasty' and 'Detective', will herald the birth of a new Korean-style character entertainment movie. The performance of a famous detective against the huge conspiracy that shook Joseon can be seen on January 27th in <Detective of Joseon: The Secret of the Helmet Flower>.

'Acting Basic Seat' Kim Myung-min's radical transformation!
The birth of the most interesting characters of 2011
Although he has a genius sense, if you know about it, the famous Joseon detective who is full of stupidity is more attractive because it gives a different feeling from the typical detective character. Contrary to the image of a general detective who calmly solves cases with a meticulous and cool personality, Detective Chosun is somewhat lax and sarcastic. As he receives a secret order from King Jeongjo and begins to uncover a huge conspiracy that will shake up Joseon, tension-filled reasoning and action unfold. Kim Myung-min, who has a reputation for serious and deep method acting, shows a variety of faces in <Detective Joseon: The Secret of a Helmet Flower> from a smirk to a serious figure that demonstrates sharp intuition and careful reasoning ability. From the detective's characteristic charismatic gaze acting to the action and comic acting that doesn't spare the body… His acting transformation, completely immersed in a pleasant and attractive character, strongly imprints 'Detective Chosun = Kim Myung-min' in the head of the audience, and heralds the birth of a new detective character who will receive the love of the nation in 2011.

The first film adaptation of the best-selling author Kim Tak-hwan's original work!
The second meeting of Kim Tak-hwan and Kim Myung-min after <Immortal Admiral Yi Sun-shin>!
The movie <The Joseon Detective: The Secret of the Helmet Flower> is a film adaptation of the original novel "Secret of the Yeo-nyeomoon" by Kim Tak-hwan, the best-selling author. 「The Secret of the Yeolnyeomun」is the second in a series of “Baektappa” series that melts the stories of young Silhak scholars into a mystery novel set in the late 18th century, one of the most interesting periods in Korean history. It was highly praised by critics and readers for its meticulous process of events, detailed descriptions, and unexpected twists. Writer Kim Tak-hwan, who wrote the original novels for the dramas [Immortal Admiral Yi Sun-sin] and [Hwang Jin-i], is a famous novelist who is always mentioned when discussing the genre of Korean historical novels. He is evaluated as a writer who opened a new horizon in Korean historical fiction, both in name and reality, through extensive data research, detailed and accurate historical evidence, and creative and outstanding imagination.
In particular, this <Chosun Detective: The Secret of the Helmet Flower> is attracting attention as the second meeting between Kim Myung-min and Kim Tak-hwan, who made their presence known to the world through [Immortal Admiral Yi Sun-sin]. Based on the solid original work, attention is focused on whether the combination of writer Kim Myung-min and Kim Tak-hwan will achieve screen domination following the conquest of the CRT. <The Joseon Detective: The Secret of the Helmet Flower> will add cinematic tension and fun to the solid story of the original, giving it the charm of a faction historical drama without any regrets.

That's what 'crazy presence' is all about!
Tasty acting competition presented by luxury cast members
The movie <Detective Chosun: The Secret of the Helmet Flower> will be responsible for a different kind of fun with the acting battles of the characters full of personality presented by the luxury cast. Oh Dal-soo, a 'crazy presence' that makes you laugh just by being there, plays the role of a dog breeder who devised an innovative dog breeding method, and plays the role of a detective's assistant. Han Ji-min boldly abandons the existing elegant image and transforms into a charismatic Han Gaekju that wrinkles the large-scale top of Joseon, exuding a sexy charm and attracting attention. Lee Jae-yong, who has played a lot of characters full of personality enough to be called a professional villain actor, proves his acting prowess by once again demonstrating his absolute villain force with the role of 'Im Pan-seo' in <Detective Chosun: The Secret of the Helmet Flower>.
The appearance of various charming characters enriches the depth of the drama and adds to the fun of the movie. Expect dazzling performances by actors full of presence!