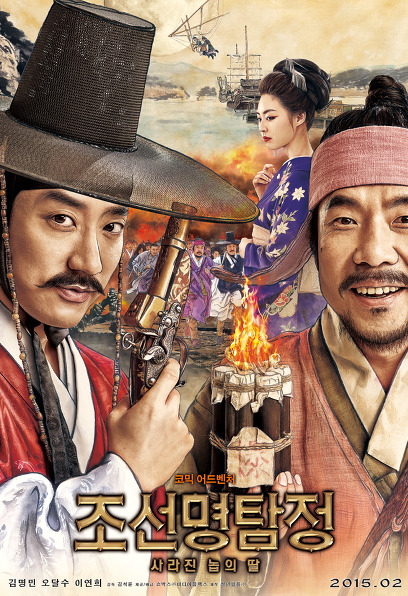 It's our turn to go again!

19th year of King Jeongjo. Kim Min, the best detective in Joseon, who was once a prominent envoy receiving secret orders from the king, was exiled to a remote island with ugly hair stung for some reason. The only people who come to visit are Seo-pil, the partner she had been with the day before, and a young girl who comes every day to find her younger brother.
Meanwhile, Kim Min hears that rogue silver bars are circulating throughout Joseon, and as a result, his sleeping detective instinct begins to wriggle. In the end, with the superpower of leaving the exile, a full-scale investigation begins to find the rogue silver bullion distribution case and the missing girl's younger sister. For the first time in history, famous Joseon detectives Kim Min and Seo Pil set out to solve two cases at the same time! However, Hisako, a beautiful woman whose identity is unknown, further confuses the investigation of the famous duo.
Will they be able to solve the two mysterious cases and restore their splendid old glory?

The best detective duo in Joseon, Min Kim and Seo Pil are back!
“Korea in crisis. Leave it to us one more time!”

They are back!
Returning to gold after 4 years <Detective Joseon: The Daughter of Nob Who Disappeared>

<Detective Joseon: The Secret of the Helmet Flower>, which mobilized 4.7 million viewers on the New Year's Eve in 2011, returned to the second series <Detective Joseon: Daughter of Nob> after 4 years.
At the time of its release, <Detective of Joseon: The Secret of a Helmet Flower> is a comedy acting ensemble that works perfectly with Kim Myung-min and Oh Dal-soo, the fresh genre of Korea's first detective play, and spectacular sights and laughter that can be enjoyed coolly. loved by the movie. <Detective Chosun: The Secret of the Helmet Flower>, which raised expectations for a sequel by producing nicknames such as 'Chosun version <Indiana Jones>' and 'Chosun version <Sherlock Holmes>', was heavily armed with stronger laughter and bigger incidents. and come back <Detective Chosun: The Daughter of Nob>, which returned brilliantly as if meeting the fans' expectations, has been upgraded in all aspects such as fun, sights, and action.
In the second part, Kim Min and Seo Pil, who met as a client and a detective in the first part, became a perfect pair of detectives and became perfect partners for each other. Kim Min and Seo Pil, a fantastic duo, who can recognize each other's inner feelings just by looking at their eyes, come together in front of a huge incident. If the first part was a story about uncovering the corruption of bureaucrats, this time, we pursue the background of the rogue silver bullion distribution case that shakes the Joseon economy. In addition to the request of a girl to find her younger sister, Kim Min and Seo Pil, who are the first to solve two cases, have to solve the two cases, so the story, action and comic size has grown. Kim Min, who had been favored by the king, was suddenly imprisoned in exile, but escaped from exile in front of an incident that caused the detective's blood to boil in his body. As a fugitive, they cross mountains to avoid swords and government forces, cross the sea, and even experience aerial battles before and after flying in the sky. And following Han Ji-min, this time, the icon of beauty, Lee Yeon-hee, seduces the audience. With her beautiful beauty and mysterious charm, she is expected to captivate the audience as well as throw the investigation of Kim Min and Seo-pil into a labyrinth.
Director Kim Seok-yoon, who returned to Chungmuro for the first time in four years for <Detective Chosun: The Daughter of Nob>, said, “The actors and crew as well as the audience have dreamed of making two films. I wanted to do well as everyone had been waiting for a long time, and I had fun working on it.” In addition, Kim Myung-min said, “Detective Joseon: Daughter of Nob is a rare genre in Korea. I hope to make a mark in the Korean film industry.” <Detective Joseon: Daughter of Nob>, which shows off the variety of charms that the famous detective duo, showing doubled partner breathing, had hidden in front of the huge incident! You can check it out in theaters for the coming Lunar New Year.

Myung-Min Kim and Dal-Soo Oh, the return of the strongest duo!
The strongest combo in Joseon has returned to the screen once again. In <Detective of Joseon: The Secret of the Helmet Flower>, Kim Myung-min and Oh Dal-soo, who lived and died, show off a stronger breathing in the face of the huge incident.
Kim Myung-min, the 'acting master' who showed a unity with the character in various works such as dramas [Immortal Admiral Yi Sun-sin], [The White Tower], [Beethoven Virus], the movies <My Love By My Side>, and <Love Story>. He had a brilliant brain, quick judgment, and the best reasoning skills in Joseon in <Detective of Joseon: The Secret of a Helmet Flower>, but if you find out, he succeeded in transforming his first comic acting into a sloppy character. Kim Min has been transformed from a competent detective who was trusted by the king to a criminal exiled to a remote island, but takes the risk of escaping from exile when he encounters an incident that shakes the Joseon economy. Following the first part, his passionate investigative instincts and sloppy charms regardless of time and place provide great pleasure to the audience this time as well. In addition, the larger scale that unfolds across land, sea, and air will make the audience more exciting. With his one and only partner, Seo-pil, he sometimes uses and sometimes depends on him, but still boasts a fantastic breath and solves the case.
Oh Dal-soo has shown a shining presence in the movies <The Thieves>, <The Gift of Room 7>, <The Attorney>, and <Pirates: The Bandit Who Went to the Sea>. In <Detective Joseon: The Missing Daughter of Nob>, he reunited with Kim Myung-min once again as Seo-pil, an indispensable partner for famous detective Kim Min. In the first part, Seo-pil was Kim Min's hidden client, but this time, she stepped out as Kim Min's full-fledged partner. He helps Kim Min in extraordinary ways, such as Joseon's best merchant-like wealth, stealth, and handsome men, but whenever Kim Min's absurdity comes out, his rustic killing spree is still there. Kim Min's best partner, the best orator to put his arrogance to sleep, and the only person he can trust until the end, Seo Pil is the best partner to Kim Min, the best detective in Joseon.
Kim Myung-min and Oh Dal-su, who will meet again after 4 years and show a stronger breathing. Kim Myung-min said, "It's strange if we don't stick together in a movie. The days of filming alone were so empty and the days were long." When I was filming alone, I got along so well that it felt empty without Kim Myung-min." He said, raising expectations for the acting ensemble of the two who became stronger by conveying deep affection. The rogue silver bullion distribution incident that shakes the Joseon economy Kim Min and Seo Pil, who will take on two cases at the same time, taking on two cases at the same time as a girl asking to find her younger brother, and Seo Pil, who will show off their perfect breathing, and Kim Myung Min and Oh Dal Soo, who are reunited as the best duo again after 4 years, are Sherlock in Detective Chosun: The Daughter of Nob. He is expected to outperform and outperform Dr. Watson.

A bigger scale!
A journal of super-special events linking land, sea, and sky in Joseon!
The advent of a new comic adventure that spans six, four, and four balls!
From the case of the distribution of rogue silver bars that disturb the Joseon economy and the request of a girl to find her younger brother, for the first time in history, the two cases have been solved at the same time. It will show the essence of a comedy adventure detective drama crossing the land, sea, and air of Joseon. Pay attention to the activities of the fantastic duo Kim Min and Seo Pil, who will show a stronger smile and spectacle with a dynamic scale and unpredictable story!

一.陸 (Yuk): Make the soles of your feet sweat! Detective Combi who traverses the mountains, fields, and villages!
When the rogue silver bully first appears on the land of Joseon, Kim Min and Seo Pil disguise themselves as members of a swordsman gang to uncover the case. However, their identity is discovered by a clever boss and they are pursued by a group of swordsmen, and the hardships of the two duo begin in earnest. Running through the mountains, fields, and streets with sweat on the soles of their feet, they uncover the truth of the rogue silver bullion distribution case, and the battle on land between the two duo begins in earnest.

二.海: So that your whole body is drenched! A great detective combination that swims in the river and crosses the sea!
After being chased by the sword world and reaching the cliff, Kim Min and Seo Pil are in a desperate situation with no other place to escape. Kim Min proposes to Seo Pil to jump into the river under the cliff. However, what caught Seo-pil's eyes as he plunged into the river was Kim Min, who was crawling down the cliff alone. Because of Kim Min's words, both knowing and being deceived, Seo Pil drowns in the river and passes through the crisis of death. Kim Min's fine hair and Seo Pil's hardships grew stronger.
On the other hand, Kim Min, who received a request for a case that awakens his sleeping detective instincts, escaped from the island where he was exiled, relying on a ferry. Then, when he hears that the Segyun Ship, whose clue is hidden, is leaving for Daemado, he expands his investigation into a huge sea.

three. void (Gong): Make your stomach ache! The first ever flying detective combo!
Kim Min and Seo Pil have to infiltrate a remote island where the decisive clues of the incident are hidden, but face difficulties that cannot be reached by land or sea. It is Kim's invention, the 'bigger', that shines at this time. The Bigger is a Korean version of a large hang glider, but the important thing is that it is an invention that has never succeeded in flying. At the bottom, Kim Min and Seo Pil throw themselves at the vigor and attempt Joseon's first flight.
A combination of Kim Min and Seo Pil, who is devoted to resolving the case while scouring the land, sea, and air of Joseon. As director Kim Seok-yoon expressed his confidence, "In <Detective of Joseon: The Secret of a Helmet Flower>, the audience's favorite comedy, as well as the mystery and action parts, have been upgraded overall." You can look forward to the second story.