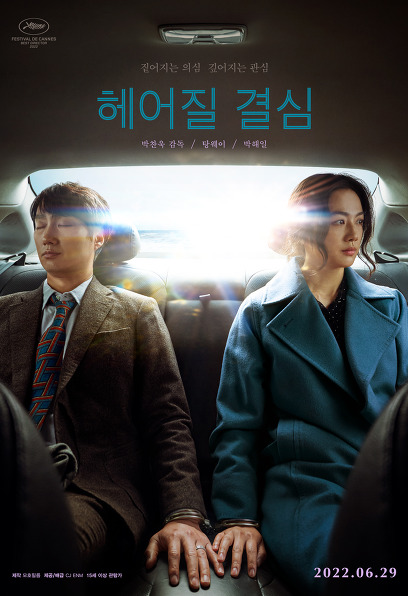 The death of a man who fell from the top of a mountain.
Detective Hae-jun (Park Hae-il)
He meets Seo Rae (Tang Wei), the wife of the deceased.

“I was worried if I didn’t come to the mountain, I feared that I would eventually die.”

Seorae, who does not show any special agitation in the face of her husband's death.
The police put 'Seorae', which is different from ordinary bereaved families, on the suspect line.
‘Hae-jun’ is an alibi on the day of the incident, and the newspaper,
Getting to know Seorae through an undercover investigation
I feel my interest in her growing.

On the other hand, 'Seorae', which is difficult to guess inside,
Knowing that the other person is suspicious of you
He treats Haeun without any hesitation… .

Shortly after its world premiere at the Lumière Theater, <Decision to Break Up> ranked first among the films screened this year in the Screen International rating, the official daily magazine for the Cannes International Film Festival, and was pre-sold in 192 countries around the world, and received a lot of attention even before the movie was released. received The influential media, THE HOLLYWOOD REPORTER, "a world-class master who has reached the apex, and the hot chemistry between the two actors." Director Park Chan-wook returns to Cannes with a great romance. The tension, the emotional confrontation, the genius use of the latest mobile technology, and the twists and turns of the clever storyline were so much Hitchcock. Tang Wei’s acting is impressive.” In addition, Smash Cut Reviews said, “Director Chan-wook Park breathes new life into the story of an unusual detective through <Decision to Break Up>, showing that he is at the peak of his career. Park Hae-il's acting was good enough to rank among the detective characters of all time, and Tang Wei performed a lifelong performance. Director Park Chan-wook's potential and wit created the most ideal romance with a thriller."

Director Park Chan-wook said, "Although movies have gone through an era where theaters have lost their customers, it has also been an opportunity for all of us to realize how precious a theater is to that extent. Just as we have hope and strength to overcome this disease, our films I also believe that our filmmakers will protect the cinema and protect the film forever.” He said, “I would like to express my gratitude to the many crews who have given all their support to make this film.” .

Starting with <Oldboy> (2003), the Jury Prize at the 57th Cannes International Film Festival, <Bat> (2009), the Jury Prize at the 62nd Cannes International Film Festival, and the 69th Cannes International Film Festival in the competition section. Director Park Chan-wook has captivated critics and movie fans around the world with dazzling performances in every film, from The Handmaiden (2016), which won the Best Foreign Language Film at the 71st British Academy Awards. Director Park Chan-wook, who has built a unique world of work with original story composition and fascinating mise-en-scène, continues taking on new challenges, such as <Little Drummer Girl>, the first drama series aired on the British BBC, and the short film <Sunset Dream> in collaboration with Apple. Coming back to a Korean movie after 6 years through "Determination". Director Park Chan-wook, who has fascinated the audience with intense material and expression that crosses extreme and taboo, introduces a new world of work that is completely different from his previous work through the melodrama <Decision to break up>.

<Decision to Break Up> is a movie about a detective named Hae-jun, who investigates a murder case in the mountains, meets Seo-rae, the wife of the deceased, and begins to feel suspicious and interested at the same time. <Decision to break up>, which delicately captures the emotions of two characters who feel a special curiosity and unexpected affinity for each other amid the intense tension of the investigation process to uncover the truth of the case, offers fresh cinematic fun that crosses suspense and melodrama. In particular, 'Seo-rae', the wife of the deceased at the center of the story, confuses not only 'Hae-jun' but also the audience about what her true feelings are with her words and actions, creating dramatic tension. The complex and subtle emotions of the two of them pile up one after another as the space changes from the mountain to the sea, the relationship between doubt and interest, and the truth revealed during the investigation process, creating an immersive and unforgettable feeling for the audience. leaves an unforgettable impression. A fresh development that combines a detective drama and a melodrama, a charming character that stimulates curiosity, appropriate humor that appears at unexpected moments, and director Park Chan-wook's sensual mise-en-scène and directing power, <Decision to Break Up> is the most classic and original movie of 2022. It will slowly and deeply immerse everyone in it.

Seorae, the upright and calm wife of Byun Saja
Courteous and clean detective 'Hae-jun'
Fall in love with two dramatic and charming characters

<The Decision to Break Up> is the emotional line of the two characters, the wife of the deceased and the detective who started to be curious about her. Seo-rae, who lost her husband in a sudden accident, does not show sadness or agitation. Seorae, who is suspected of being a suspect in the case by the police, but never loses her upright and imposing attitude, creates tension in the form of unknown whether or not she is the real culprit. Seorae, who treats 'Hae-jun' who is suspicious of him without hesitation, and blocks the other person's speech with unexpected expressions and answers although he is not good at Korean. 'Seo-rae', which embarrasses the opponent but does not lose his calmness, makes it impossible to give an answer for even a moment as to what is the truth, what is sincere, and what form is real. Seorae, with its ever-changing charm, is directed by Park Chan-wook, who has created unforgettable and original female characters in each work, such as Mido in <Oldboy>, Geumja in <Mr. 's new character breathes a dramatic breath into the play.

From the moment he first encounters Seo-rae, the only survivor of the case, Hae-jun feels a subtle interest and instinctive suspicion unique to a detective. 'Hae-jun', a team leader in the homicide world recognized for his abilities, always leaves a strong impression with his neat attire, a neat and clean personality, and a polite and friendly appearance to his opponents, differentiated from the detective characters in the existing genre. He, who had never been disturbed by the slightest bit, experiences unexpected changes after meeting Seorae. Always suffering from insomnia, he is finally able to sleep deeply. The subtle and tense feelings of two men and women who start from the relationship between a detective and a suspect, who do not easily reveal their sincerity, are intertwined with attractive characters, leaving an unforgettable deep impression on the audience.

<Decision to Break Up> is expected to be the first meeting between Tang Wei and Park Hae-il, which was a sure choice of director Park Chan-wook from the script stage. Tang Wei, who established himself as a world-famous actor through director Lee Ahn's <Color, Gye>, shakes the hearts of the audience with his character and acting that is only possible because he is Tang Wei through director Park Chan-wook's <Decision to Break Up>. As director Park Chan-wook and writer Jeong Seo-kyung conceived the work with Tang Wei in mind, Tang Wei, who perfectly melted into the character as if wearing his own clothes, completed an attractive character that stimulates curiosity at every moment. “Many reactions and decisions of ‘Seorae’ will go beyond the expectations of the audience. She is very attractive, and <Decision to Break Up> is something I've been wanting to do for a while."

Haeil Park, who has shown attractive acting regardless of genre from historical dramas to action and drama such as <Memories of Murder>, <Monster>, <The Last Weapon Bow>, <Princess Deokhye>, and <Namhansanseong>, is a polite and clean detective in <Decision to break up>. ‘Hae-Jun’ is expected to present a different charm. Park Hae-il, who is an unshakable detective who has been involved in the case day and night, but falls into a storm of emotions after meeting 'Seo-rae', portrayed the character three-dimensionally with solid inner work and detailed acting. “As I lead the play with ‘Seorae’, how can I make it in detail from small things to very big emotions? That was the biggest homework assignment for me as an actor,” said Park Hae-il, who perfectly expressed 'Hae-jun''s delicate yet simple charm, as well as her inner complex emotions that deepen as time goes by. Tang Wei and Park Hae-il, who met in the first work with director Park Chan-wook, and the characters they completed after persistent deliberation, will give the audience a sense of immersion that they cannot escape.

Set against mountains and seas and different spaces as the background, <Decision to Break Up> focused on capturing the changing psychology of two men and women while capturing the tense suspense of the investigation process. Accordingly, the world-class production team, from writer Jeong Seo-kyung, who has been working with director Park Chan-wook for many years, to cinematographer Ji-yong Kim, art director Ryu Seong-hee, costume director Kwak Jeong-ae, and music director Jo Young-wook, joined <Decision to Break Up> and enhanced the dramatic story.

For <Namhansanseong>, the first Korean to receive the Energa Camerimage Golden Frog Award (Best Cinematography) in 2018, cinematographer Ji-yong Kim, who showed impressive camerawork in <The Secret Service> and <Sweet Life>, directed Park Chan-wook through <The Decision to Break Up>. I collaborated with him for the first time. Director of photography Kim Ji-yong concentrates on the actors' facial expressions and gaze to capture the true face of the two characters' emotions in a dense way, bold zoom-in and zoom-out to visualize the character's imagination, and subtle and secretive perspective shots as if watching the relationship between the two. It created an immersive atmosphere and heightened the immersion of the film. Art director Ryu Seong-hee, who won the Vulcan Award at the Cannes Film Festival for <The Handmaiden>, worked with director Park Chan-wook in <Oldboy>, <I'm a Cyborg, but it's okay>, and <Bat>. The space of each person is realized by focusing on the waves of the meandering mountains and rippling waves. In particular, Art Director Ryu Seong-hee added detailed settings and delicate touches such as the houses of Seorae and Hae-jun, a police station with a differentiated structure, and a newspaper room, reflecting the story and inner side of the character, creating a unique space unique to <Decision to break up>. Costume director Kwak Jeong-ae, who has created the atmosphere of the movie with costumes that utilize the characteristics of each character, such as <Mr. Kind Venus>, <The Handmaiden>, and <The Managers of Namsan>, expressed the inner and psychological changes of the two characters through costumes, and directed by Park Chan-wook. Music director Jo Young-wook, who collaborated in almost all of the works of <New World>, <Inside Men>, and <Taxi Driver>, doubled the emotional lingering of the story with music that goes back and forth between suspense and melodrama.