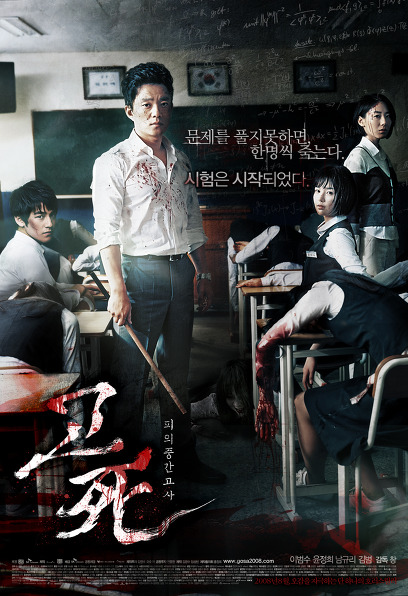 Elite students from 1st to 20th in the entire school who are locked in school! The bloody midterm exam that started again, D-day
On a Saturday, about 170 days before the entrance exam, a special elite class is being held only for exemplary students from 1st to 20th. Including a loyal high school girl Ina, a rebellious student in the school, Kang Hyun, a best friend who always suffers from jealousy towards Ina, a paranoid Hye-young who is obsessed with No. Twenty problematic students, including Jae-wook, 3rd place, who was ill with timidity, Sujin, who is 4th place, suffering from neuroticism, and Changwook, the most popular student in the school, New English teacher So-young, who took an elite class, and Chi-young, the head of the school, remain at school. have.
However, during class, 'For Elysee' suddenly rings on the classroom TV and on the campus speakers, and on the screen, the image of Hye-young, the number one in the whole school, is seen struggling as she is trapped in a water tank that is gradually filling up with water. And one voice poses a midterm exam question that risked Hyeyoung's life to the students. There is nowhere to escape, and there are only 24 teachers and students in the school. The bloody midterm exam prepared just for us begins again.

“If you don't get the right answer within the given time, your friend will die.” If you want to live, guess the right answer!
With 'Hye-Young', the number 1 in the whole school, the friends start to disappear one by one, and in order to save them, and for me to survive, I have to find the answer to the problem!
limited time!
Limited place!
The countdown has already started. A bloody middle school death that risked the life of a friend begins.

Beom-soo Lee taking on a horror movie challenge and Gyu-ri Nam and Jeong-hee Yoon making their screen debuts
And Kim Bum, who has matured. Their passion for their new acting challenge!

Actor Lee Beom-soo, Nam Gyu-ri, who is taking on acting for the first time, and Yoon Jeong-hee, who is making his screen debut. And even Kim Bum, who came back with a mature appearance… In <Death: Bloody Midterm Exam>, the propositions of trust, passion, and challenge are shining in different ways. Lee Beom-soo is the best protagonist who holds the center and is a justice teacher with intense charisma and warmth, Hwang Chang-wook. ' will show a different look. Yoon Jeong-hee, who is making her debut on the screen, is expected to show off her mature charm as 'Jung So-young', an English teacher who is hard-headed and perfectionist in a delicate female character in a CRT, and Kim Bum, who was loved as a national younger brother, as 'Kang-hyeon', the best king car in the school.

Ingenious idea! Fresh material! Immerse yourself in the stylish horror visual aesthetics you've never seen before!
<Death: Bloody Midterm Exam> boldly breaks away from the stereotype of the existing 'ghost story', and focuses on the material of the 'midterm exam' inspired by an experience that everyone can relate to and the various stories provided by the space called 'school'. In addition to the ingenious ideas, they target the five senses of the audience looking for the 2008 horror movie. The battle for time and space between teachers and students who have to take a bloody midterm exam that risked their friend's life will bring the audience's dramatic tension to a climax. Here, you can also expect differentiated visual pleasure through the stylish video of director Chang, who has already been recognized for his skills as a unique and sensual music video director.

Destroy the genre! A fantastic combination of horror and thriller, only one horror + thriller in the summer of 2008.
<High Death: Bloody Midterm> aims at the most dramatic combination of horror and thriller. If the works that opened the heyday of Korean horror movies stimulated the audience's senses with the characteristics of 'horror', a variation on 'horror', it was the exquisiteness of 'horror' and 'thriller' that stimulated the audience as the years passed until 2007. It is not an exaggeration to say that the paradigm of horror films has shifted due to the combination. <High Death: Bloody Midterm Exam> will bring out the sensory characteristics of 'horror' to the maximum, and at the same time combine the intellectual pleasure and speed of 'thriller' to give the audience a different kind of horror.