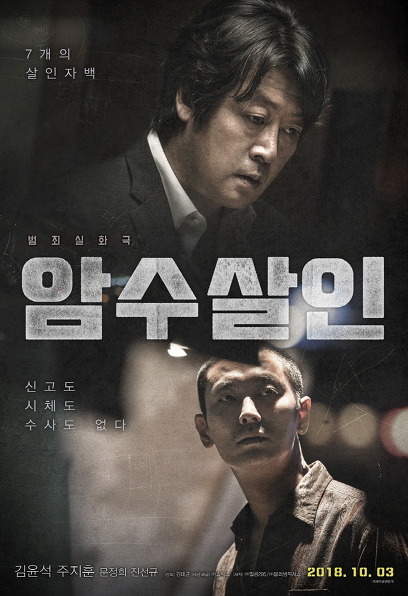 There are victims, but there are no reports, no bodies, and no investigation. A murder case unknown to the world.

“Seven, a total of seven people. They are the ones I killed.”
Incarcerated murderer Kang Tae-oh (Ju Ji-hoon) confesses to additional murders to detective Kim Hyung-min (Kim Yun-seok).
Hyeong-min, convinced by the detective's intuition that the confession is true, believes in the list of seven murders that Tae-oh wrote down and begins an investigation.

“If you don’t believe this, you can’t investigate. Let’s believe unconditionally first, and doubt until the end.”
Tae-oh's additional murders are unknown to the world.
Hyeong-min learns that Tae-oh is cleverly mixing lies and truth, but he does not give up on the investigation. However, due to the approaching statute of limitations and insufficient evidence, the investigation faces difficulties…

Only the culprit knows! Male and female murder with no reports, no bodies, and no substance
A vivid crime story based on a real story that took place in Busan.

Reality is sometimes more dramatic than fiction. The story of a detective who is serving a 15-year sentence and confesses to an additional murder that was unknown, and uncovers the truth based on this confession that no one believes in. The movie <Sexual Murder> is based on a dramatic real-life event that makes you wonder, 'How did this happen?' It started in the fall of 2012. It was an episode of SBS [I Want to Know That] that director Kim Tae-gyun happened to see through a broadcast. The day after the broadcast, he recklessly went down to Busan for coverage, met the real protagonist, Detective Kim Jeong-soo, and headed to the scene where the traces of the crime are still vivid. After five years of persistent interviews and meticulous coverage, the unknown subject matter that has not yet been properly dealt with in Korean films is finally revealed. A murderer who provokes a detective by leaking clues of additional murder like a puzzle in a prison cell, and a detective who pursues a case that has no substance and does not help with performance and achievement. The story of why the killer chose Detective Kim out of many detectives and confessed to additional murder, where in his words are real and to what extent are fakes, and the story that is hard to believe is a true story motif, unfolds with a dense psychological warfare between the two characters. In fact, the film, reconstructed based on thousands of pages of investigative records and processes, takes the audience to the center of the mystery murder case that has been hidden under the surface until now with the vivid dramatic reality that seems to happen at any time in our daily life.

Kim Yun-seok and Ju Ji-hoon, who conquered the theater this year,
The ultimate king of obsession, detective VS. A strong first meeting as a murderer who leads the investigation!
<Sexual Murder> presents the first experience of meeting two actors, Kim Yun-seok and Ju Ji-hoon, who received unanimous praise from movie fans this year, in one movie. Kim Yun-seok captivated the audience by reviving a forgotten era by vividly showing the true face of evil perpetrated by public authorities in <1987>, which was released this winter. He disassembles as Detective Kim Hyung-min, who persistently pursues the truth by believing in the clues thrown by the killer in prison, looking for the victim, and plays the 'obsession' and 'call' itself that we want in this era. Joo Ji-hoon, who emerged as a hot icon by sweeping theaters this summer with the role of Hae Won-maek, a grim reaper in the <Along with the Gods> series, and Jung Moo-taek, director of the North Korean security department in 'The White Pup' and <The Duke>, is a male and female murderer he committed as if he was putting a detective on the palm of his hand in a prison. He plays Kang Tae-oh, a murderer who confesses to and leads the investigation process. Two people with different personalities and images, but with a common denominator of 'strength', meet and collide in an ironic relationship, completing a true crime story, a psychological warfare full of tension and a humanistic investigation drama. Kim Yun-seok is expected to open a new chapter in the Korean detective character by showing the culmination of his detective roles through detective Kim Hyung-min, who has compassion and empathy for the victims who have died at the hands of the murderer unfairly rather than anger or revenge against the criminal. am. The character of Kang Tae-oh, who is not a psychopath killer in a common serial killer movie, but a murderer who can't even understand the truth because it is impossible to even feel the reality, has also come to life thanks to actor Ju Ji-hoon, who gives his unique color to any role. The acting of the two actors, who confront each other without being pushed back and forth as if going back and forth between serve and receive, and exchange the initiative, will be one of the greatest pleasures of watching <Sexual Murder>.

Investigation to find the victim, not the criminal
Breaking the myths of the crime genre and creating fresh fun and sympathy
<Sexual Murder> provides a new level of fun and tension without the typical pattern of a criminal investigation genre that involves flashy action in the process of finding and chasing a criminal. Killer Tae-oh Kang has already been convicted of one murder and has been imprisoned. Rather than finding the culprit, we have to dig into the case where we can't even figure out who the victim is, or whether it even exists, based on the murderer's confession alone. It is about solving the most difficult mission in the history of the Korean crime genre, which is to find the victim and the case itself rather than apprehending the criminal. This tricky investigation, which has to identify the real crime from the list of murders thrown by the criminal, shines with the detective's tenacity to find the victim and comfort the soul after contrasting it with the missing person list. Confessions, investigations, and unexpectedly discovered evidence of the murderer appear repeatedly in reversal to add momentum to the drama, and the audience, who followed the battle between the killer and the detective as if being pushed around, naturally puts emotions on the detective's obsession. . Detective Kim Hyung-min, who believes only in the murderer's statement, is transferred from the drug investigation team to the unfamiliar criminal department, and is neglected by fellow detectives because it does not help the team's performance. <Sexual Murder>, which densely captures the determination of a detective who continues to pursue the case while holding on to the monologue-like question of “Where are you?” toward the victim who may or may not know whether he is alive or dead, is a human reverberation without excessive emotional agitation or ideology. Offers deep sympathy.

100% Busan All Locations! reality itself
A true crime story in space and air!
The first scene of the true crime story <Sexual Murder>, based on a real incident in Busan, is the first meeting between Detective Kim Hyung-min and Kang Tae-oh in the Jagalchi Market, where the sea and the fishy smell of the back alleys are at the same time. Afterwards, as the background of Kang Tae-oh's past crimes and Hyung-min's lonely investigation to find the victim and prove that the culprit is Kang Tae-oh, real places in every corner of Busan that only locals know about appear. The production team, who prioritized reality as a true story motive rather than a thriller tone, chose the method of following the scene of the incident and the investigation process in a documentary manner. Detective Kim Jung-soo, who provided the motif for the movie, and the actual incident site were visited several times so that the audience could feel the emotions the characters see and experience. On the other hand, in the case of the reception room where Hyeong-min and Tae-oh mainly meet, it reproduces the actual reception room structure, which is difficult to come across in Korean movies, which is completely different from the general structure that is usually implemented in genres, so that the audience feels like they are in the middle of the investigation interview. implemented In addition, the production team, who traveled all over Busan to portray the horror of a terrible crime in everyday space, is the place where we can all see at least once in the space of the murderer Tae-oh Kang, the mountain where Tae-oh commits crimes, the basement, the reed forest, and the back alleys of the city. I cast a place that seems to have passed by, and it gives a chilling shock that there may be 'male and female murders' that no one actually knows around me.