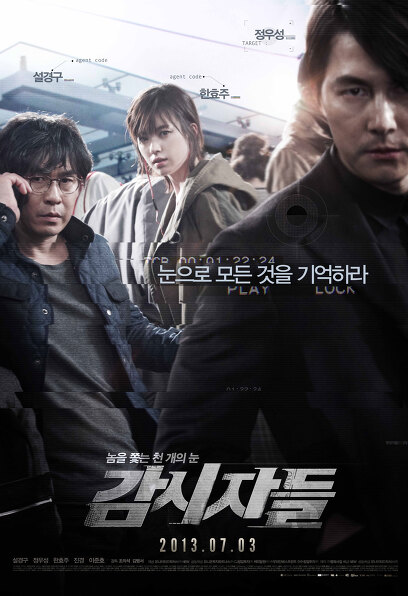 of a man without a trace
Remember everything!

A special organization monitoring team within the police that specializes only in monitoring crime targets.
In a surveillance team led by 'Chief Hwang (Kyung-gu Seol), a surveillance expert who chases down crimes with animalistic intuition and instinct.
A newcomer named Yoon-Ju Ha (Hyo-Joo Han), who has excellent memory and observation skills, joins the team.
And after a while, a crime that makes even the thorough siege of the surveillance team useless occurs.
An armed robbery incident that took place in just three minutes without a single mistake.
All eyes are focused on their presence, leaving no faces or clues.

'James' (Jung Woo-sung), the leader of a criminal gang who moves according to a well-thought-out plan and does not tolerate even a second's error.
He never reveals his existence, and as the surveillance team tightens his pursuit, he continues to commit crimes more precisely.
In order to prevent further crimes, the surveillance team must find out the true nature of the gnome.
Captain Hwang and Yoon-Ju Ha start chasing him using all his memories and clues…

a thousand eyes chasing him
<Watchers>

A 'surveillance expert' who remembers everything with his eyes
In the summer of 2013, a crime movie with a new material is born!
As of 2013, everything in Korea is being recorded. CCTV, which can be accessed from anywhere on the street, illuminates all parts of the city, and the smartphone stores even the movement of the owner in real time. <Watchers> is a film that deals with the first material of a special organization within the police called 'Surveillance Team' that is in charge of only monitoring crimes based on information and clues in the background of this highly informationalized and networked modern society.

All missions start with surveillance, end with surveillance, and no intervention is allowed except for permitted missions, and the surveillance team moves under strict rules that are excluded from the mission as soon as their identity is exposed. The special setting of <Watchers> that the criminal cannot be caught even if it is in front of them and that it is a special organization in charge of only monitoring stimulates interest with a freshness that has not been seen before. In addition, <Watchers> creates new cinematic fun based on a contemporary consensus by realistically depicting the world of a 'surveillance expert', unlike the existing criminal detectives that lead the play centered on a specific character or case. . Surveillance experts who hide their identity and chase targets with only their eyes and memories. In addition to the tight pursuit of secret criminals who continue to commit perfect crimes while avoiding their surveillance networks, <Watchers> is a crime action movie with differentiated material and fun that will heat up the summer theaters.

Surveillance expert who tracks even the sound of breathing vs. Crime expert who doesn't even have a trace
Tight tension, only one tracking action this summer!
The movie <Watchers> is a crime action film depicting the pursuit of surveillance experts who hide their identities and pursue a criminal organization without a trace. James, a secret crime designer who leaves no faces or clues, and a surveillance team that should not be revealed. The breathtaking pursuit of those who hid each other's identities breaks the typical frame of a typical chase play, and at the same time creates a new psychological tension. The process of narrowing the encirclement towards each other between the surveillance team chasing an unidentified target and the criminals who do not know the realities of those chasing them, is connected by a sharp tension that never breaks and tightens the heart of the viewer.

In addition, the tight confrontation between a criminal organization led by 'James', a crime designer who does not tolerate even a single minute of error, and a surveillance team that does not miss even a moment's memories and clues becomes a major point to increase the tension and immersion of <Watchers>. With the opening where the operation site of the surveillance team hiding from the crowd and the tight crime scene of James intersect in real time, <Watchers> is a new style that captures the powerful confrontation between the two organizations with the best skills in a uniquely directed and urgency video. 's tracking action was completed. Surveillance experts who track even the sound of their breath and crime experts who do not even have a trace, their only one tracking action in the summer of 2013, <Watchers>, will captivate the audience with its unpredictable and solid storyline. will be.

Seol Kyung-gu, Jung Woo-sung, Han Hyo-joo, Lee Jun-ho
A combination of 4 actors with different charms! Best multicasting
The movie <Watchers> adds trust and expectations by combining the best actors with different colors and personalities as well as acting skills. Seol Kyung-gu, who created a detective character representing the Korean film industry through the <Public Enemy> series, and has proven her acting and box office power through various works such as <Silmido> <Haeundae> and her recent work <Tower> He leads the play by taking on the role of the leader of the surveillance team, code-named 'Peregrine Falcon'. The character of Hwang Banjang, who leads the operation with rational judgment but does not lose his humanity and humor, was completed as a more three-dimensional character by adding cool intelligence and reason to the unique charm of Seol Kyung-gu, where charisma and pathos coexist.
'James', the leader of a secret criminal organization that opposes the surveillance team, takes on the role of actor Jung Woo-sung with a unique presence and tries to transform his acting. Jung Woo-sung, who mainly captured the hearts of the audience with his soft and good image, was disassembled into James, a cold criminal who never reveals his identity, past, or emotions. .
Han Hyo-joo, who has established herself as a leading actress in her 20s such as <Gwanghae, the Man Who Became King> and <Banchangko>, plays the role of 'Ha Yoon-ju', a rookie of the guard group with excellent memory and observation skills, playing the role of 'Ha Yoon-ju' Multicasting has been completed. Han Hyo-joo, who took off her elegant and feminine image and transformed into a professional surveillance expert, creates dramatic tension and rich drama through the character Ha Yoon-joo, who transforms from a rookie who cannot adapt to life and the field to a more mature over time. Here, 2PM's Lee Jun-ho, a Hallyu star who is challenging the screen for the first time through <Watchers>, will play the role of 'Squirrel', the ace of the surveillance team, to breathe life and vitality into the play. The combination of the best actors representing each age group with such different charms and perfect teamwork will become a special viewing point unique to the movie <Watchers>.

Everywhere in Seoul is being monitored!
Real sights and action unfolding in the background of downtown Seoul!
A man on the roof of a high-rise building overlooking the city center secretly orders a crime, and the eyes of the guards chasing the criminal in cars parked on the roadside, convenience stores, and subways are constantly moving. In the movie <Watchers>, the space where the guards and criminals are chased and pursued is none other than the crowds of the city passing through their ordinary daily lives. <Watchers>, which wanted to capture vivid images of the city where there are a mixture of observers and criminals in the crowd, most of the filming took place in various parts of Seoul. The surveillance scene, which takes place in places familiar to the audience, such as Gangnam Teheran-ro, Itaewon, Cheonggyecheon, Yeouido, Yeongdeungpo, and Jongno, adds to the interest of the audience by adding spatial reality. In addition to this, there is a cinematic and mundane scene, such as the temporary headquarters of the surveillance team created by the art director Harmony Seong, who has created spaces that fit the works of <Jeon Woo-chi>, <War Against Crime: The Golden Age of Bad Guys> and <The New World>, and James's operation office. <Watchers>, with a balanced design of a living set, captures a more realistic and realistic sight.

In addition, <Watchers> catches the audience's attention with various attractions such as car chasing on an overpass in downtown Seoul and James' action scenes. In particular, James' action scene, which leads to a long take of one scene and one cut in a narrow alley, created a unique and unprecedented action scene that starts from the back of the person through wire shooting and continues to the front and the top. Martial arts director Huh Myung-haeng's tight directing of <The Good, the Bad, the Weird>, <Woochi Jeon> and <The New World>, and Jung Woo-sung's sophisticated and thorough action, who digested all the actions himself, are representative of <Watchers>. It will be remembered as a famous scene. In the middle of Seoul, where everyone's daily lives are busy, <Watchers> will set your eyes on realistic yet stylish sights and actions.