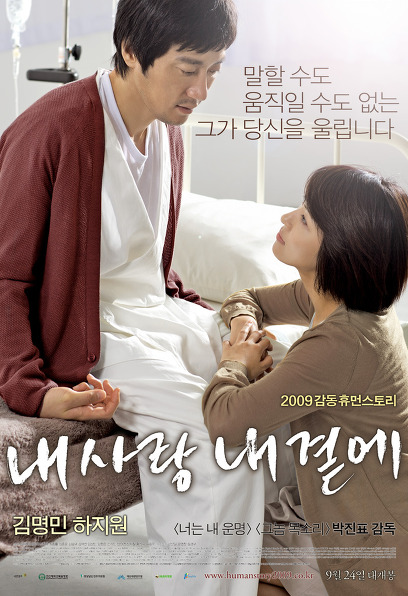 〃 My body hardens and eventually I die without a move. Will you still be by my side?〃
Jong-woo (Kim Myung-min) suffers from Lou Gehrig's disease, which gradually paralyzes his body. On the day that even his mother, his only blood relative, died, Jong-woo reunited and fell in love with Ji-su (Ha Ji-won), a funeral director who grew up in the same neighborhood as a child. The couple got married a year later, and the newlyweds' home is the hospital. Jong-woo is in a difficult situation to hold a spoon in his hand, but he is happier than ever because he has his wife, Jisoo, who is always by his side, and he has a stronger will to fight the disease than anyone else. 〃 Jisu, will a miracle really happen to me too…〃
A six-bed ward for critically ill patients with general paralysis or a vegetative state. While they are encouraging and comforting each other with their ward members who have similar attitudes, patients who show signs of recovery and those who have hope for surgery are emerging one by one. However, Jong-woo's condition is getting worse, and Jong-woo, who accepted the disease coolly and burns his will to fight the disease, becomes more and more afraid to watch his body change day by day. And finally, the language barrier that I so desperately wanted to avoid begins…
[ About Movie ]

A moving material that touches the heart, illuminating the 'world's most cruel disease' ALS

Lou Gehrig's disease is a rare disease in which only the motor nerve cells are selectively destroyed, and the muscles of the body are gradually paralyzed while the intelligence, consciousness, and sense are normal. Because the cause of the disease is still unknown and there is no cure, it is a terrifying disease that usually paralyzes even the muscles necessary for breathing within 3 to 4 years after the onset of the disease, and death unless a ventilator is installed. Starting with paralysis of limbs and facial muscles, the disease progresses until you can only blink your eyes and cannot move a single finger. It is called 'the most cruel disease in the world'. <My Love By My Side> is the first film to illuminate ALS, which is unfamiliar to the general public. Through the heartbreaking story of Jong-woo, who is struggling with ALS, and Ji-soo, who keeps his side, it arouses warm interest in Lou Gehrig's disease, which is desperately needed by society because there is no cure yet, and at the same time, tears and tears that are differentiated from the existing Shinpa story will impress.

Director Park Jin-pyo's human trilogy following <You Are My Destiny> and <The Voice of That Guy>
Human with appealing directing that brings out the emotions of the viewers to the maximum, such as <You Are My Destiny>, which mobilized 3 million viewers nationwide and broke the record of a Korean melodrama, and <Voice of the Gnome>, which simultaneously embodies cinematic fun and social messages. Director Park Jin-pyo, who has shown an affinity for the genre. <My Love By My Side> is a new human story that he presents following his previous works. If <You Are My Destiny> dealt with the extreme love between a man and a woman, <The Voice of the Guy> deals with the desperate love of parents who lost their child to a kidnapper, <My Love By My Side> deals with patients and their families at the crossroads of life and death. Through their stories, they tell the heartwarming love of a family. This movie, which presents a richer drama than previous works, encompassing emotions related to human love and family love, is the human trilogy and the conclusion of director Park Jin-pyo.

A warm and touching family story that touches the heart
<My Love By My Side> presents various types of family melodies in the background of a 6-bed ward where critically ill patients gather as well as the passionate love story of a couple Jisoo and Jongwoo. An elderly woman (Nam Neung-mi-Choi Jong-ryul) who has been waiting for her vegetative husband to wake up for 9 years, a husband who takes great care of his wife in a coma (Ha-ryong Lim-Seong-min Lim), and her young daughter who became paralyzed by an accident, hiding her tears with her heart. The story of a crying mother (Shin Shin-ae and Son Ga-in), a younger brother (Lim Jong-yoon & Lim Hyeong-jun) who supports his older brother 24 hours a day at work and at the hospital, etc. episodes containing <My Love By My Side>, which depicts the precious family love that gives us a reason to live even in the face of limiting circumstances and keeps us by our side, will be a warm comfort to our hearts, who are worn out in difficult times.

Kim Myung-min's method acting for Lou Gehrig's patient, who will conquer the screen in 2009
Kim Myung-min, who has created famous characters that are engraved in people's minds in each of his works, such as Yi Sun-sin in the drama <Immortal Admiral Yi Sun-sin>, Jang Jun-hyeok in <The White Tower>, and Kang Ma-e in <Beethoven Virus>. This time, he took on the role of Baek Jong-woo, a patient with ALS. After thoroughly researching the character, Kim Myung-min is an actor who insists on 'method acting', which completely erases himself and becomes one with the character in charge. This time, he studied the character meticulously, not only conducting data research on ALS several months before filming, but also regularly visiting actual ALS patients and their doctor. In addition, according to the disease progression of ALS patients, subtle differences in hand movements, foot movements, and facial expressions are analyzed and reflected in the acting. showed an astonishing tenacity. At the end of filming, the producers, who were concerned about their health, refused to lose weight, but despite suffering from insomnia and hypoglycemia, director Park Jin-pyo said to Kim Myung-min, who did not give up weight loss for the character, saying that he was a 'monster'. . Kim Myung-min's fierce acting passion, who challenged the physical and mental limits for acting, is the highlight of the movie <My Love By My Side>.

Kim Myung-min + Ha Ji-won + Director Park Jin-pyo, the best meeting
Star actors Kim Myung-min and Ha Ji-won, who combine acting and box office performance, and director Park Jin-pyo, recognized for their directing and box office performance. <My Love By My Side> is the most talked-about work of this fall, both in name and in reality. The meeting of those who have been recognized for their acting and directing skills is enough to give confidence in the build quality of the movie, and all of them are foretelling an upgraded transformation. Kim Myung-min is a man with a confident and positive mindset enough to propose to a woman he likes first even while fighting the disease, and he has the opposite charm to Kang Mae, who has a harsh charm. Ha Ji-won is a proud woman with a special job as a funeral director, cutting her hair that she has grown for 7 years, and preparing a new look by mastering the actual haircut. . In addition, director Park Jin-pyo is preparing to move beyond his previous films with family love as the topic. Combining Kim Myung-min's perfect transformation, Ha Ji-won's mature charm, and director Park Jin-pyo's appealing direction, <My Love By My Side> is a foreboding of the birth of a well-made human film that will touch the hearts of all people this fall.