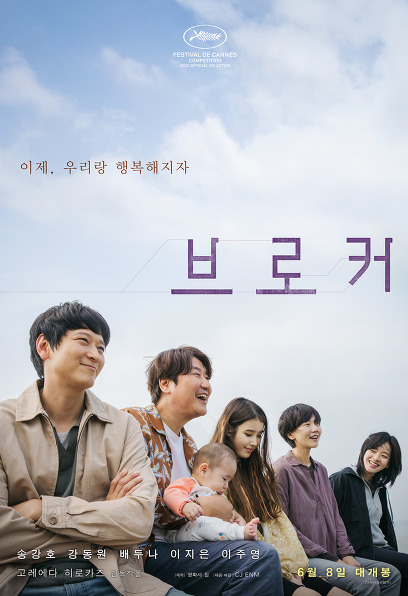 Sang-hyeon (Song Kang-ho), who runs a laundromat but is always in debt
‘Dong-su’ (Kang Dong-won) from an orphanage who works at a baby box facility.
One night when it rained heavily,
They secretly take a baby in a baby box.
But the next day, unexpectedly, mother So-yeong (Lee Ji-eun) returns to look for baby Woo-seong.
When So-yeong tries to report the disappearance of the baby to the police, the two openly confess.
The excuse that he did it to find the right person to raise his superiority is amazing, but
So-young decides to join Sang-hyeon and Dong-soo on a journey to find Woo-sung's new parents.

Meanwhile, Detective Su-jin (Bae Doo-na) and his junior Detective Lee (Lee Joo-young) watch the whole process.
They are caught as current criminals and quietly pursued to finish the investigation that has been ongoing for half a year.

baby box,
The people I met unexpectedly there
An unexpected special journey begins.

Director Hirokazu Koreeda won the Ecumenical Award at the Cannes International Film Festival for the second time after 2013's <Becoming a Father>. The Ecumenical Award is given to films that stand out for their artistic achievements that deeply reflect on human existence. <Distance>(2001, Competition Category), <Nobody Knows>(2004, Competition Category), <Air Doll>(2009, Notable Eyes), <Becoming a Father That Way>(2013, Competition Category/Judge Award), < Sea Village Diary>(2015, Competition), <Typhoon Passes>(2016, Notable Eyes), <A Family>(2018, Competition/Palm Golden Award), and <Broker>, 8 times in total at the Cannes International Film Festival, Director Hirokazu Koreeda, who recorded the splendid feat of being invited to the 6th Cannes Film Festival in the competition category, once again proved his strong directing power and unique warm and sharp insight through this ecumenical award.

He won the Jury Prize at the 66th Cannes International Film Festival for <That's How You Become a Father> (2013), and won the Palme d'Or at the 71st Cannes Film Festival for <A Family> (2018), a world-class master in name and reality. Directed by Hirokazu Koreeda. Director Hirokazu Koreeda, who has drawn the lives and people who are marginalized and unprotected in society with a sharp and warm gaze, returns after 3 years with <The Broker>. Director Hirokazu Koreeda, who presents <The Broker>, the first Korean film directed in collaboration with Korea's leading actors and crew, plans to move the audience's hearts with a story that everyone can relate to, beyond the differences in language and culture.

The movie <Broker> is a film about the unexpected and special journey of those who have a relationship around a baby box. 'Sang-hyeon' and 'Dong-soo' secretly bring a baby in a baby box. However, <Broker>, which depicts the story that begins when the mother So-young, who left her baby, returns, and the three unintentionally set out together to find the baby's new parents The process of communion and change is captured with a warm gaze. 'Sang-hyeon', who scoffs at his actions to find a suitable person to raise the baby, and 'Dong-soo' from an orphanage who knows better than anyone how painful it is to be abandoned, and left the baby in the baby box. Until the next day, 'Soyoung' came back. Their meeting was unexpected, but as they travel together, they feel a bond and share their daily life as much as any other family. On the other hand, the detectives 'Soojin' and 'Detective Lee', who pursue them, create tension while chasing the brokers, but at some point they also become special companions on this journey, adding to the depth of the drama with the unexpected surprise. <Broker> is a film that warmly comforts all those born into this world, which will leave an unforgettable impression on the story of those who started from the baby box with director Hirokazu Koreeda's unique warm and sharp insight.

Kang-ho Song, who once again established himself as a world-famous actor beyond Korea with <Parasite>, the first Korean film to win the Academy Award for Best Picture, and was appointed as a jury member of the 74th Cannes International Film Festival to solidify his status. return to the face Song Kang-ho, who portrays the character Sang-hyeon, who calls himself a broker of goodwill, with excellent acting skills, leads the center of the play with an irreplaceable presence, perfecting the relaxation and warmth of <Broker>. In particular, as director Hirokazu Kore-eda wrote the scenario with Song Kang-ho in mind from the beginning, he completed a three-dimensional character full of vitality by perfectly digesting everything from the unique natural and human appearance that only Song Kang-ho can draw to the heavy and deep inner acting. In addition, Kang Dong-won, who reunited with Song Kang-ho in a work 12 years after <Sister-in-law> and showed perfect chemistry, shows off his simple yet human charm through the role of 'Dong-soo', the partner of 'Sang-hyeon'. Because he knows better than anyone what kind of scars being left behind, Kang Dong-won, who is serious about finding adoptive parents who will raise his baby well, enhances his immersion with his deep eyes and delicate emotional acting. Doona Bae, who worked with director Hirokazu Kore-eda for the second time following <Air Doll>, played 'Soo-jin', a detective who chases after brokers, with an excellent acting ability to portray the complex inner side of a person who is cool and rational, but sometimes shows passion and emotions. Lee Ji-eun, who was praised by critics and viewers through the drama [My Mister], took on the role of 'So-young', who is with her on the journey to find the baby's new parents. Lee Ji-eun completed the multi-layered character by expressing the role of 'So-yeong', who rarely reveals her story and inner feelings, with delicate acting that does not miss a single expression, gesture, or step. Actor Lee Joo-young, who has been noticed for his strong personality and presence in movies and dramas, takes on the role of 'Detective Lee', a junior who continues the investigation with 'Soo-jin', exuding unique energy and showing fresh chemistry with Bae Doo-na. The synergy of Korea's representative actors spanning a wide range of generations and diverse personalities will become a special viewing point that can only be seen in <Broker>.

Baby, Mom, Detective and Broker
of those I met unintentionally
Unexpected special journey

The movie <The Broker> is full of colorful characters, including a broker who wants to find the baby's new parents and trade on good terms, and a detective who pursues them to capture the decisive moment of the deal.

Sang-hyeon runs a laundry, but it is not easy to withstand the pressure of debt, which is growing faster than she earns. He plans a deal to secretly bring a baby in a baby box and hand it over to a family who desperately wants a baby, but he argues that it is an act of good intentions to find the right person to raise the baby well. 'Sang-hyeon', who is somewhat lax and human for a broker, starts with money, but as time goes on, he is truly approaching the task of finding new parents for the baby 'Woo-seong'. Sang-hyeon's partner, who works at a baby box facility, and Dong-soo, a former nursery school student, knows the pain and trauma of being abandoned better than anyone else. Dongsoo, who looks blunt and blunt on the outside, but has a warm and friendly personality who cares deeply for Woosung and Soyoung, also plays a role as a companion to Sanghyeon. Here, the baby's mother, 'Soyoung', who joined the unexpected journey, does not easily reveal her heart to anyone and adds to the curiosity as she closes it tightly. 'Soyoung', who never talked about why he left the baby in the baby box and why he went to look for it again, gradually changes as he travels with 'Sanghyun', 'Dongsoo' and 'Woosung', and the story is finally revealed. will deliver an unforgettable and powerful sound.

Meanwhile, Detectives 'Soojin' and 'Detective Lee', who quietly follow their journey, form another axis of the journey in the movie <Broker>, creating a calm but different tension and afterglow. With the devoted support of her loving husband, 'Soo-jin', who does not hesitate to work undercover for several nights, continues to pursue her, creating tension by all means and methods to catch 'Sang-hyeon' and her friends. At the same time, it raises curiosity about another reason why 'Soo-jin' is immersed in the case and moved in. And Detective Lee, who believes in and follows his senior 'Soo-jin' and works diligently on the investigation, sees 'Sang-hyeon' and his party, and energizes the play as a character who feels subtle emotions in a completely different form from ordinary criminals. In this way, <Broker> will guide the audience on a special journey they will never forget.

<Parasite>, <Along with the Gods>, <Wailing>, [Squid Game]
Well-made production completed by Korea's top staff
Delicate and warm emotions on the screen

<Broker>, which started as an idea by director Hirokazu Koreeda six years ago, was made possible by the joining of the film studio, a production company that has continued to make solid works, and the top production crew in Korea. Director Hirokazu Koreeda, who has been looking forward to working with a Korean actor for a long time, started to materialize the work in earnest through meeting with a film studio, and composed a more detailed and realistic story through several domestic tours and video interviews. In particular, <The Broker> draws more attention as it is a directing project that was performed at all locations in Korea with domestic actors and a domestic production team. In this regard, cinematographer Hong Kyung-pyo, art director Lee Mok-won, and music director Jeong Jae-il and costume director Choi Se-yeon, who are world-renowned domestic production crew, joined together to create <Broker> with the delicate touch of talented staff, creating a more realistic and warm sensibility.

Cinematographer Hong Kyung-pyo, who has created numerous masterpieces with world-class directors, such as Bong Joon-ho’s Parasite (2019), Lee Chang-dong’s Burning (2018), and Na Hong-jin’s The Wail (2016), is the director of photography, Koreeda through The Broker. It was the first time I worked with Director Hirokazu. Cinematographer Hong Kyung-pyo, who focused on shooting with natural light rather than flashy techniques, used the border between bright and dark light to capture the emotions of the characters more dramatically. In addition, after a long wait without artificial setting, it captured the natural movements of sunlight, rainwater, and wind as it is, completing a video with the warmth of <Broker>. Art director Lee Mok-won, who made the world of imagination into a realistic reality through [Sweet Home], <Along with the Gods>, and <Train to Busan>, tried to realize the most everyday and natural space in <Broker>. Art director Lee Mok-won made an effort to draw a realistic space suitable for the movie while filming on location in Busan, Yeongdeok, Uljin, and Wolmido, while at the same time capturing the unique colors of the place. The art of <Broker>, which expresses the traces of time accumulated naturally beyond a simple reenactment of an everyday space, from the marks of a soccer ball on the wall, stains on the sheets, to crumbs of cracked cookies, doubles the immersion with delicate details. In addition to this, costume director Choi Se-yeon, who showed strong character personality through costumes in <Parasite>, <Seokjeon>, <The Thieves>, and <Mother>, added reality with costumes that show the stories and characteristics of the characters, and [Squid Game] , Music Director Jeong Jae-il, who participated in Parasite, expresses the emotions of the characters while increasing the amplitude of the resonance with delicate melodies that move the hearts of the viewers. From filming, art, costumes, to music, <Broker> will leave a deep impression on the hearts of the audience with the participation of the best production crews in each field.