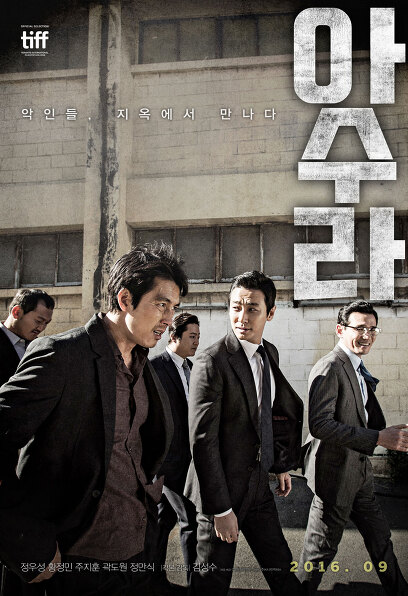 Asura
He is a sentient being between the animal world and the human world. With three faces and six hands, he was originally a god of battle, but he turned to the Buddha and became a god of law. Humans who like to fight and argue may have been reincarnated from Asura. The world where Asura sentient beings live is a place where they fight and fight with each other.

hellish world,
War of the wicked fighting to survive <Asura>

Homicide detective Han Do-kyung (Jung Woo-sung) receives money in return for taking care of the aftermath of Park Seong-bae (Hwang Jung-min), a vicious mayor who commits various crimes for gain and success. While constantly exposed to evil, Han Do-kyung has entered the path of a villain who does anything to make money with his wife, who is a terminal cancer patient, as an excuse. Kim Cha-in (Kwak Do-won), a venomous prosecutor, and Do Chang-hak (Jeong Man-sik), a prosecutor, are using him to blackmail and exploit Park Seong-bae's corruption and criminal charges. Prosecutors and Park Seong-bae crush Han Do-kyung's neck for their own interests and purposes.
Meanwhile, Han Do-kyung, who has become like the eyes of a typhoon, sends a junior detective Moon Seon-mo (Ju Ji-hoon), who follows him like an older brother, into Park Seong-bae's subordinate, and the hell is unfolding between bad guys who are desperate to survive if they don't bite each other.

The return of the crime action genre of director Kim Seong-soo!
The hell of the wicked bitten and bitten vividly on the screen <Asura>
Director Kim Seong-soo returns with the full-fledged crime action movie <Asura>. The world of <Asura>, which is based in Korea, where those with power and money greedily leave the good and evil of Sudan and move toward the goal, is different from the Korean crime action that moved in the big structure of the confrontation between good and evil. . The distinction between legal and illegal, justice and injustice is meaningless in the world of <Asura>. True evildoers are everywhere, and the evil mayor in <Asura> and a corrupt detective who enters the path of the evildoer by taking care of all the dirty things in the market to pay for his wife's hospital bills. A young detective with a mirage-like ambition, a prosecutor and a prosecutor investigating the mayor. They all commit evil deeds without hesitation to achieve what they want. There is no reflection or reflection. Police, mayor, prosecutor. The world of evil perpetrated by those who must work for the public good as a public servant is a hell of a biting and biting villain, reminiscent of the world of wild beasts in the jungle, who relentlessly trample on others for their own gain.

Jung Woo-sung, Hwang Jung-min, Ju Ji-hoon, Kwak Do-won, Jung Man-sik!
See them all on one screen!
A full-fledged 'Battle of the Villains' that couldn't be more intense than this <Asura>
Five strong male actors leading Korean male films. Woo-sung Jung, Jung-min Hwang, Ju Ji-hoon, Do-won Kwak, Man-sik Jeong. <Asura> is the first film to meet them on one screen. The synergy that will be created when they come together, and the chemistry that will occur when they clash, in itself stimulates expectations. Besides, everyone is evil. It's bound to be tough A bloody bloody battle between those who do evil to survive and have more, and the bloody battlefield they create pushes the energy of each actor to the limit. Jung Woo-sung and Hwang Jung-min, the first performance of two hot actors who seemed to have met at least once, is also a strong point to watch <Asura>. The two actors meet as a corrupt police officer, a minion, and a vicious mayor holding a leash with the money he needs as an excuse. gives rise to On the other hand, Joo Ji-hoon, who is with all four actors for the first time, is the only character in the movie who changes from good to evil, and shows the two-dimensionality of the two faces like <Asura> in three dimensions. In addition, Jung Woo-sung's first performance, Kwak Do-won and Jeong Man-sik, vividly depicts the evil that is perpetrated in the name of public authority, disassembled as a special division prosecutor and prosecutor's investigator, and is different from Hwang Jung-min's evil. drive you to hell The intense energy of the five actors who compete and tighten each other for survival, greater power, success, success, and faith invites the audience to a new world of villainous battles that they have never seen anywhere else.

Director Kim Sung-soo and Jung Woo-sung, the fourth meeting!
<Beat> <There is no sun> <Musa> and <Asura>
It started with <Beat> (1997) 19 years ago. Like the copy of 'Another name of a beating youth', through <Beat>, Jung Woo-sung has established himself as an icon of youth and the star that Koreans love the most. <Beat> also drew the attention of director Kim Seong-soo with a freshness that combines action and romance, an individual against an organization, revenge, and a trump card that knows where the end is. Since then, Director Kim Seong-soo and Jung Woo-sung's <There Is No Sun> (1999), depicting the wretched youth in a sympathetic way, remained as the first Korean buddy film, while <Samurai> (2001) went to the Goryeo era as an all-loce in China. 'Warrior' Jung Woo-sung introduced a new look and a different scale of period dramas to the audience. Director Kim Seong-soo, who discovered a new side of actor Jung Woo-sung one step ahead of the audience and introduced it to the audience, undertakes the biggest transformation every time he appears in his movies, always digests high-level actions directly without a second, and introduces new things that have not been done before. Jung Woo-sung was born as a character. The collaboration between the two has always captivated the audience with the pleasure of new genres, fresh characters, and the synergy of the two that defy the expectations of the audience. Director Kim Seong-soo, who made <Beat>, <No Sun> and <Warrior>, which sealed Jung Woo-sung's youth on the screen most beautifully. 19 years after the first meeting, director Kim Seong-su summoned Jung Woo-sung as a villain who lives in a world without compassion, and also called into the hell of the wicked. And for the audience, the fun of discovering another movie, another Jung Woo-sung awaits.

A power ensemble that makes the wicked worse <Asura>
Kim Won-hae, Kim Jong-su, Kim Hae-gon, Yoon Ji-hye, Oh Yeon-ah and Yoon Je-moon
In <Asura>, a strong supporting cast with personality, acting skills, and an image that you will never forget once you see it, complete the villain's hell road more vividly with a power ensemble. Kim Won-hae, who proved to be an all-weather acting expert through <Prosecutor's Story> and <Signal>, disassembles into the role of 'Jakdaegi', a drug addict who is a telephoto (intelligence) of Detective Han Do-kyung, realizing the depth of an ant-hell-like pit where 'Han Do-kyung' is missing. describe it well Kim Jong-soo of <Minority Opinion> and <Misaeng> is the head of the planning department of 'Park Seong-bae' and has served him right next to him for over 20 years and faithfully carries out his orders regardless of good or bad, showing the charisma of 'Park Seong-bae' in reverse. In addition, director Kim Hae-gon, who showed irreplaceable acting through <Sweet Life> and <Pyran> as the president of a construction company 'Tae Byung-jo', a former gang leader colluded with 'Park Seong-bae', appeared, and the reality of the kingdom of evil built by 'Park Seong-bae' shows Yoon Ji-hye of <Kundo> appears as 'Cha Seung-mi', a detective belonging to the special prosecutor's investigation team with strong discipline and action, and 'Han Do-kyung' becomes a servant of 'Park Seong-bae' as a wife with terminal cancer, a citizen of the <minority opinion>. Oh Yeon-ah, who showed realistic acting as a prosecutor in charge of the participatory trial, appeared, and it is an opportunity to make the audience sympathize with 'Do-Kyung Han'. Yoon Je-moon appeared in the role of 'Hwang In-gi', the detective chief, who will be one of the pivots in which 'Han Do-kyung' will be found weak by the prosecution, completing the human figure in the hell road of biting and biting. <Asura>, the arena of great acting, is full of fun to watch the actors from beginning to end.

Producer of <Unfair Trade> <War on Crime> and producer of <New World> Produced by Manai Pictures Han Jae-duk
Cinematographer Lee Mo-gae of <I Saw the Devil>, <Cold> and <Daeho>, the darkness that makes the light stand out!
Art director Jang Geun-young of <Save the Earth> and <Detective Hong Gil-dong> builds the kingdom of evil!
<New World> <Daeho> <Train to Busan> Martial arts director Hur Myeong-haeng, it's a fight before action!
The hell of the wicked completes the world of <Asura>!
<Illegal Transaction> <War on Crime> <Shinsegae> These are the three films that left a clear mark on the Korean crime action genre. The fact that Jae-duk Han, the producer of <Unfair Trade> and <War Against Crime> and the founder of <New World>, is the producer of <Asura>, shows the real world of the wicked without compromise. It provides belief in the color of the result of the crime action <Asura>.
Director Kim Seong-soo showed the photo of the actual crime scene to the cinematographer of his aunt, whom he shared with <The Cold>, and ordered the real feeling. He also emphasized the importance of the inevitable darkness of the world inhabited by the wicked. As a result, <Asura> was born as a film in which the wicked roam entangled with each other, and darkness dominates the eyes and mind. Rather, light is perceived due to the existence of darkness, and coolly conveys the energy of evil that is not good. In addition, to reflect the feeling of hell unfolding inside the character who is entangled in the midst of evil, the camera also shakes when the character is agitated, and the camera work that seems to print intense emotions also makes the audience ride with the emotions of the villains in the movie. On the other hand, Annam City, a fictional city somewhere in the metropolitan area where hundreds of billions of dollars in development rights are at stake, had to be born as a kingdom of evil where the dark alleys of the back alleys where villains can roam, art director Jang Geun-young By combining old spaces and places that have not been touched by development, we recreated the movement of the wicked under a consistent concept through retouching. In addition, martial arts director Huh Myung-haeng, who created the elevator action in <New World> and the zombie action, which can be called a choreography in <Train to Busan>, ruled out a carefully crafted combination in order to realistically depict the battle of the wicked for survival. And the action was taken with the feeling of a 'fight' in which the characters collide fiercely based on their immediate instincts. As a result, the car chase scene in the rain, performed by Woo-sung Jung without a stand-up directly at the steering wheel, was born as a famous scene that conveys the excitement, vividness, and urgency of the character to the audience, which can only be felt when an actor risks his or her life for action. The funeral scene in the second half, where people gather in one place and literally bite and tear, unfolds on the screen full of bloody battlefields where desperate emotions, not action, drive the characters.