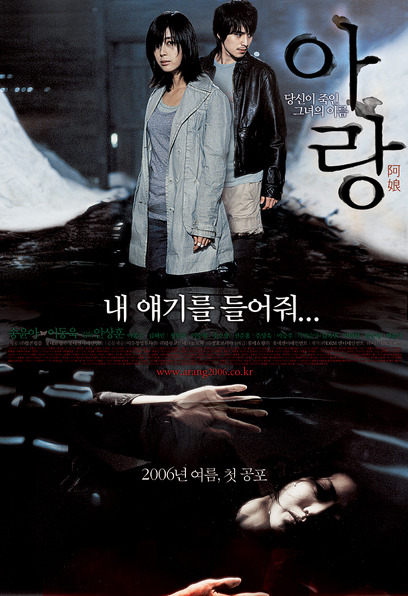 it's okay…
I'm with you
Instead of me… I'll kill you

A mysterious serial murder case… , and the ghost of a girl!

Three serial murders. The only clues found at these sites are the website of a girl named Min-jeong floating on the victims' computers.
So-yeong (Song Yoon-ah), a female detective who has just returned from suspension, becomes a team with rookie Hyun-gi (Lee Dong-wook) to investigate the case. Afterwards, So-young finds out that the three victims are friends and are all related to a girl named 'Min-jeong'. So-young points out Dong-min (Lee Jong-soo), a doctor who is a friend of the victims, as a possible suspect and starts an investigation. Then one day, an incident occurs where even the suspect Dong-min is murdered.

“Four is too little, five is too many… “The ghost of the girl who returned as a curse!

Minjeong's website found at the scene of four serial murders. So-young and Hyeon-gi, who are investigating Min-jeong, find out that she suddenly disappeared 10 years ago and that she had met these four victims.
So-yeong finds a seaside village where Min-jeong lived, and hears a bizarre rumor there. It is none other than that a girl ghost appears in a salt warehouse near the seaside in an abandoned salt farm! After visiting the place that terrified all the villagers, she begins to see the ghost of a girl in her dreams every night…

long ago,
Arang was brutally murdered.
Her original soul… Even if he died, he didn't die.

July 2006,
The ghost of a girl who wanders in a seaside town.
She is still stained with a blood curse… live.

Four hundred years ago, Arang was the envy of all the bachelors because of her talent and beautiful appearance as the wife of the Miryang Bussa. Gi-gi, an old man who admired her, tried to rape A-rang by bribing A-rang's nanny. However, in response to A-rang's fierce resistance, Joo-gi pulled out a dagger and threatened, but in the end, A-rang dies by the dagger.
And a few years later, in Miryang, every successive adjunct succumbed to death on the first night of his appointment. As soon as he took office, he died, and no one wanted to take office, and when he reached the point of being retired, a man named 'Jinsa Lee', who was an excellent writer but had no background and was unable to take the exam, volunteered to be appointed as 'Busa Miryang' and greeted the first night.
“It’s nice to see an adult who will take revenge on me after a long time.”
“Are you a ghost or a human?”
“I went out to see the moon at Yeongnamru as the wife of the priest Yun, but was killed by a man who tried to insult me and was thrown away. To avenge my revenge, I wanted to meet the newly appointed Sato, but I only met a good adult today, so please release my restrictions.”
“Who is your enemy?”
“Tomorrow morning I will become a butterfly and sit on the cap of the official who killed me.”
The next morning, when the officials were gathered together, a white butterfly flew from somewhere. So I caught the criminal and went to the field of Yeongnamru, and when I saw Arang's body, with a knife stuck in it, it was still there. When Jinsa Lee pulled out the sword, only the bones remained and the body disappeared. The bones were removed and buried in a good place. After that, Arang's spirit no longer appeared in Sato's guesthouse.

The Korean horror movie market, which has been rapidly growing in recent years, is expanding, showing a marked increase in the number of viewers as well as the number of films produced every year. In particular, this year, horror movies that mix various materials and genres such as mystery horror, hard gore horror, human horror, and slasher horror are being produced or are in the process of being produced.
As the horror film market is diversifying like this, <Arang> aims to be an authentic horror film. The orthodox horror <Arang>, which has the form of a typical grudge drama, depicts the horrifying horror that people experience in the process of digging up the truth surrounding the curse of an evil spirit who dies. Here, by taking the motif from the long handed down tale of 'Arang', it also contains the sentiments of oriental Han (恨). As such, the movie <Arang> will approach the audience expecting a different kind of horror this summer as an authentic horror movie with a unique material.

The tale of 'Arang', the root tale of 'Janghwa Hongryeonjeon'
A mournful and sad story that captured the screen!

The 'Arang' tale is a representative tale of Haewon (解寃) in Korea. In other words, it has become the basis of various legends and ghost stories as a story about a woman 'Arang' who died unfairly and became a ghost and disappeared only after she solved her resentment. In particular, the very famous 'Janghwa Hongryeonjeon' is an example of a novel that was made into a novel in later generations based on this arang tale.
The 'Arang tale' is said to have originated in Miryang, Gyeongsangnam-do. In fact, there is a shrine called 'Arangak' in the Miryang area, which supports the truth of this tale. In addition, 'Arangje' is held on April 16th of the lunar calendar every year, and this period coincides with the time when the white butterfly that appears in the legend comes out of the world after taking off its skin, adding to its credibility.
As implied by the title, the movie <Arang> took the motif of the scenario from this 'Arang story'. In other words, just as someone will release the resentment of 'Arang', who has become a ghost in a fairy tale, an authentic horror movie that moves to the screen the plot of two detectives investigating a serial murder case meeting the soul of a girl who died unfairly and releasing her grudge instead. am.

Actress Song Yoon-ah, who has established herself as one of the few Chungmuro veteran actresses, has played alongside the best male actors of the time, such as Park Joong-hoon, Seol Kyung-gu, and Cha Seung-won. Compared to actresses of the same age, she has been working steadily without a break, and since she entered her 30s, she shines even more on the screen. In particular, she has appeared in films of various genres, such as comedy, melodrama, and horror, and is establishing herself as the most anticipated female actress for future work. As if meeting these expectations, she is preparing for another acting transformation with the movie <Arang>. She looks strong on the outside, but she is a female detective with deep inner scars and has digested intense action scenes. She will compete in good faith this summer with Ko So-young of her simultaneous release <Apartment> to determine the true horror queen.

Lee Dong-wook emerged as a pronoun of a gentle man in the TV drama <My Girl>. In particular, he enjoys the greatest popularity among women in their teens and 20s, and receives the most love calls from TV and film circles since their debut. In this interest, he has been struggling to choose his next work, and he challenges the screen with the movie <Arang>. In this movie, he casts off the image of a shrewd and neat gentleman shown on TV and tries to transform himself by taking on the role of a rookie detective who is a bit shy and clumsy but has a strong inner side. In particular, on the screen, he has achieved the best teamwork with actress Song Yoon-ah, who is a senior, and is working together with acting.