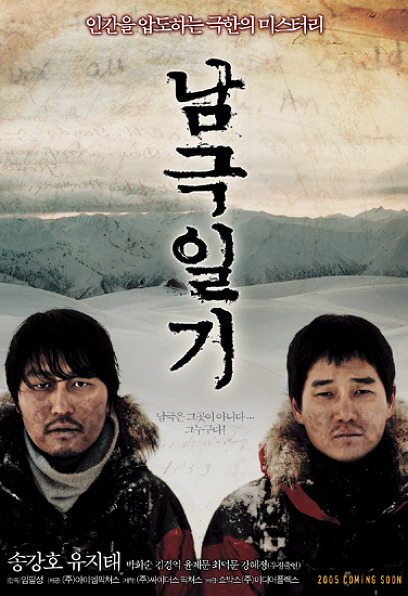 Antarctica's first mystery Antarctic diary
Where no one can go, there awaits us!

The coldest of minus 80 degrees. Antarctica where day and night last for six months.
Six members of the expedition team, including the leader of the expedition team, Choi Do-hyeong (Song Kang-ho), set out to conquer the 'unreachable point'.
The world's first unsupplied crossing that must reach the 'point of reach' before the sun goes down.
Now there are 60 days left. The most difficult and seemingly impossible challenge in the world begins!

one two… disappear into Antarctica
White out state… Daewon, who collapses with cold symptoms in Antarctica, where the virus does not live,
Antarctica continues to be dangerous with a sudden gust of wind (Blizzard).
From one day, communication with Eugene (Kang Hye-jeong) at the base camp is cut off, and the communication equipment does not listen.
At the same time, strange images and emergency calls sent to the base camp… 'save us'
In a moment of fear that there is only white snow in front of you, one…two…the crew disappear into the South Pole…

Antarctica drove them crazy.
15 days before sunset. Now, the remaining time and food are running out.
Despite the continuing mysterious incidents and the sacrifices of the crew, Choi Do-hyung's will to go there is getting stronger and stronger…
The rest of the crew tremble in fear, hoping they can escape before darkness covers the continent.
Can all these nightmares end just by going there?