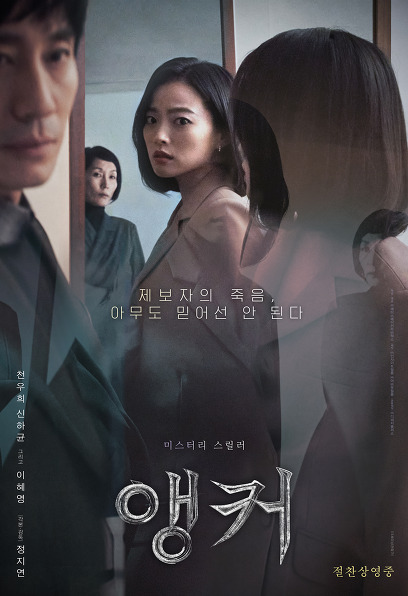 “I would be very happy if my death was reported through the mouth of anchor Jeong Se-ra.”

Five minutes before the live broadcast, to ‘Sera’ (Chun Woo-hee), anchor of the broadcasting station’s signboard
He receives a phone call warning that he will be killed.
'Sera' who can't hide her uneasiness to dismiss it as a prank call.
At the words of her mother, So-jeong (Lee Hye-young), that she has a chance to become a real anchor.
'Sera' goes to the informant's house and sees the informant's 'Smile' and her daughter's body.

After that day, the image of 'Smile', dead in front of 'Sera', starts to come to mind.
At the scene of the incident, he meets In-ho (Shin Ha-kyun), a psychiatrist who used to be Miso's doctor.
'Sera''s suspicions about him also deepen…

Check out the shocking truth that will shake up the perfect anchor!

5 minutes before the live broadcast, a call to report on his own death!
The perfect anchor, a mystery thriller that confronts the secret that shakes everything.

<Anchor> began with director Jung Ji-yeon's desire to paint the other side of a successful woman. Although life seems to be without a single point, curiosity about the glamorous side, such as the competition and anxiety that they must have experienced before they got there, led to the birth of a mystery thriller featuring the main news anchor who received a suspicious call.

Five minutes before the live broadcast, <Anchor> begins with a call to report on her own death. After the day the body of the mother and daughter of the informant, 'Smile', was discovered, mysterious things happened to 'Sera'. It enters a different trajectory from the typical crime thriller. The spirit of the deceased informant and his doctor, 'In-ho', met at the scene of the incident found again, is the last person the informant met before he died, and a person who stimulates 'Sera''s suspicions with a suspicious incident from the past. In addition to this, the mother 'Sojung', who strictly monitors the news of her daughter 'Sera' and pushes her further, rather than comforting her mistakes, stimulates anxiety. As 'Sera' approaches the secret one step at a time, she encounters greater fear. The words of the informant 'Miso', who cling to her ear like a tinnitus, amplifies the mystery surrounding the reality of 'that person' at the words "that person killed my daughter", and enters deep into the daily life of 'Sera' that begins to shake. Inho's presence raises the tension of the mystery thriller.

The illusion that 'Sera' sees, the strange things that happen around 'Sojeong' and 'Sera', and 'Sera''s journey to the truth that is hard to bear rather than what it sees is a new story, a thriller suspense that cannot let go of tension. It promises a viewing experience that simultaneously satisfies the curiosity of mystery and mystery.

Woohee Chun, Hakyun Shin, Hyeyoung Lee. When the news of the casting of <Anchor> came out, there was a lot of reaction online that it was a 'fresh' casting lineup. The fact that the three actors, each with distinct personalities, presence, and unrivaled acting skills, meet on the screen for the first time is the first reason why I am curious about the movie <Anchor>. Here, the three-dimensionality of the character that each of them will play is directly related to the natural expectation of intense transformation.

Director Jung Ji-yeon cast Chun Woo-hee as the anchor 'Sera', who has an obsession and anxiety toward success, and said, "I paid attention to Chun Woo-hee's sensitive eyes and delicate expressive power." Chun Woo-hee portrays the psychological confusion and fear felt as she transforms by portraying the professional expertise of the anchor, as well as the anchor's perfectionism who does not allow mistakes, and the daily life that shakes after a death call call.
Shin Ha-kyun, who often played a character with a unique and strong setting, had to play a difficult and ambiguous character in <Anchor> as 'In-ho', who had to spread a 'mystery' throughout the play. Shin Ha-kyun, who was impressed by director Jung Ji-yeon, "I felt pleasure in acting with variations every time," decided to find out whether he was a person with a strong doctor's spirit trying to solve the cause of the patient's disease or was a person directly related to the patient's death. He showed interest in 'Sera', who came to visit, and completed another transformation with a delicate expression of emotions, although he was restrained by 'In-ho', who was suspicious of him.

Lastly, according to director Jung Ji-yeon, Lee Hye-young is an actress with “a face with charisma and glamor that is difficult to imitate”. While raising 'Sera' alone, he portrayed the cool and anxious psychology of 'Sojung', a mother who cannot separate her life from her daughter with tension. The relationship between Lee Hye-young and Cheon Woo-hee, who contributed to the success but also hurt her daughter, and ‘So-jeong’ and ‘Sera’ is a dangerous mystery thriller with Shin Ha-kyun’s ‘In-ho’, an intruder who looks at their relationship from a different perspective. The triangle is nicely done.

'That person' comes to everyone!
Anxiety, obsession, obsession, and even fear!
An exciting journey to face the shocking truths and secrets behind the incident

At the beginning of <Anchor>, Sera's daily life seems perfect. Her mother, So-jeong, prepares breakfast and meticulously monitors the news the day before. However, the appearance of 'Sera', who goes to the empty dressing room in the old building to practice the script alone, and finds a scar on her face in the mirror that may have appeared on her face, raises strange anxiety. The appearance of 'Sera' standing on the edge of tension, a call from the informant suddenly comes in the middle, and from that moment on, 'Sera' with the underlying anxiety of being pushed out of the main anchor, a dangerous journey towards the reality of the mystery. It begins. Unable to give up the scoop that they directly interviewed, 'Sera', obsessively clinging to the truth of the case, and 'Sojeong', the mother who encourages it, push the density of the play even further, believing that they are holding the truth of Yoon Mi-so's death. In-ho, a psychiatrist, said, “Do you know? Whether 'that person' will come to Sera Jeong as well” heightens the anxiety of 'Sera'.

<Anchor> is a psychological story that gradually changes as the protagonist 'Sera' digs into the case and approaches the truth of the case. And in the process, she delicately and sensitively follows the fear she feels. Between 'Sojung' and 'Sera', the tension rises as the truth is revealed, and whether it is the facilitator in the journey to find 'that person', or the 'that person' who lurks behind the incident, 'In-ho', who is consistent with his suspicious behavior and words Maximizing the mystery, it draws 'Sera' and the audience into the secret and truth that they can't handle at the same time. Sometimes with an ominous energy that fills the screen, and in other scenes with the tension of a mystery thriller. <Anchor> three-dimensionally draws the contours of Sera's various emotions until she faces the truth, making it impossible to take your eyes off it.

Chun Woo-hee becomes an anchor! Special training to become an anchor of the main news!
The more perfect as an anchor, the higher the tension!

"Hello everyone. This is the YBC 9 o'clock news.” The moment the anchor's opening remarks go out, the audience can convince the audience that Chun Woo-hee is the main anchor who represents a broadcasting station. It was Chun Woo-hee's first mission in charge of the title role of 'Anchor'. Chun Woo-hee, who started preparations with the mindset of “let’s make it until it can be done,” started by listening to and following the news intensively in order to enter the world of other announcements from vocalization. He learned to read news scripts repeatedly for 4 hours a day, recorded the contents of the class, and practiced by repeating listening, recording, comparison, and proofreading to the extent that he almost memorized the manuscript recorded by announcer Min-jung Kim. . In order to maximize the effect of the point where the tension starts at the moment when a minute crack comes to the perfect anchor, Chun Woo-hee's principle of “to be as realistic as possible” was a task that could not be given up.

Beyond clear vocalization and diction, posture and clothing were also important preparation steps. As important as pronunciation, it was necessary to maintain perfect symmetry, which is called the anchor's life, as a means of visually conveying confidence and dignifiedness. Particular attention was paid to things such as the difference between the attire for going to work and the attire for the news. Regarding this process, Chun Woo-hee said, "Gaze processing and posture were as important as vocalization. It was more difficult than I thought because I had to set up a certain frame and act because it had to give credibility and have high delivery power.” However, while filming the news studio scene, announcer Kim Min-jung, who was stationed at the scene, said, “I have taught junior announcers, but they are really quick to learn. Also, seeing what's on the desk and even the prompter paying attention to detail, I thought that he was an actor I could trust and watch. Chun Woo-hee is the main anchor,” he said.

The cold reality of the anchor desk,
Production design where dreamy images coexist in secret!
Dive deep into the world of mystery thrillers!

The production design of <Anchor> goes hand in hand with the story. The everyday space is based on the principle of reality, and the spaces where 'Sera' walks into the secret and meets are contrasted with dreamy images that do not exist in reality, creating a world of mystery thrillers that escalate by chasing psychology. The semi-basement space of the multi-family house where 'Smile', who called to report and report on his own death, lives with his young daughter, is a long corridor structure with reality and tension that 'that person' may be lurking somewhere. was designed with In addition, children's drawings, which contrast with the tense atmosphere, are pasted on the walls to further heighten anxiety. The newsroom of 'Sera', the space of the main anchor, which was perfect before receiving the call, applied reality to thoroughly reproduce the news studio of an actual broadcasting station, supporting the anxiety of 'Sera', a perfectionist who conducts live broadcasting in a cold space. . In addition, reflecting the sensitivity of 'Sera', the main colors of the house are blue and gray, and a divided picture frame and mirror are placed to reflect the situation of 'Sera', who will face the secret.

On the other hand, the space of the informant's psychiatrist, psychiatrist In-ho, who specializes in hypnosis, is a place where 'Sera' acts like a bridge into the secret through hypnosis to uncover the death of the informant. set in the space of Director Jung Ji-yeon's request to arrange a kinetic steel material that moves automatically so that 'Sera' continues to attract attention during the conversation was also faithfully reflected. The spaces where 'Sera' stays and sees after starting hypnosis are stairs that lead down into secrets and endless fields, expressing the sense of alienation and unconsciousness that 'Sera' feels. The mirror in which 'Sera' repeatedly looks into herself also suggests the state of 'Sera', who is afraid but has to face the secret she does not want to admit. The production design of <Anchor>, where the reality of the real spaces that Sera lives and experiences, and the dreamy images of the secret world such as mirrors, stairs, and repeated images of water coexist, is a mystery thriller that creates tension and heightens the audience as the story unfolds. drawn into the world of