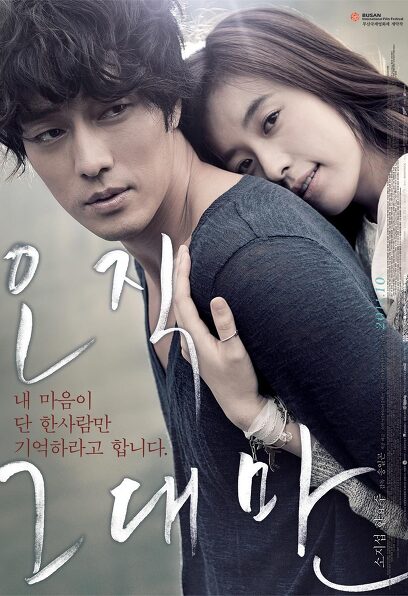 I want to protect you. The woman…
I would like to see. The man…

Cheol-min was a good boxer, but closed his heart because of a dark wound.
Although she is losing her sight, she is always bright and courageous.
Cheol-min, who was spending a lonely time in a narrow parking box, appeared like a flower, Jeong-hwa.
someone who loves me more than me That face that becomes clear when I close my eyes, only you…

The film advances toward the climax without overuse of words and actions.
Cheol-min's action at the apex overwhelms the non-rose and explosive power of <A Movie is a Movie>.
The director is also sensual, but never superficial,
Its remarkable visual and sound design gives a class to the film.
As a result, the film goes beyond popular belief and tends to go to tear gas.
Unlike other melodramas,
It succeeds in soaring into 'unpopular popular drama'.
So Ji-sub and Han Hyo-joo fulfill their duty even though they don't want anything more.
The advertising phrase 'Soju couple' is not an exaggeration.

Selected as the opening film of the 16th Busan International Film Festival!
The Busan International Film Festival boasts the highest authority in Asia. <Only You> was selected as the film to open the 16th festival. The Busan International Film Festival committee cited the reason for selecting the opening film because it was “a film that stands out with the director’s unique unpopular directing style, which stands out for omission and restraint, unlike other melodramas that tend to go beyond popular and tear.” Regarding director Song Il-gon, who has already been recognized for his skills at the world's leading film festivals, he praised the film, saying, "It is a film that is sensuous but never superficial, with remarkable visuals and sounds that capture emotions." The lead actors So Ji-sub and Han Hyo-joo said, "I can't ask for anything more, but I'm doing my part. The phrase ‘soju couple’ is not an exaggeration,” he said, raising expectations for the collaboration between the two who will present the best melodrama in 2011.

The best couple that will captivate Korea is born!
Meet So(Chiseop)♥(Hanhyo)ju!
So Ji-sub captured the hearts of women with his strong image in [Sorry, I love you], [What Happened in Bali], and <A Movie is a Movie>. He returned as Cheol-min, a young man from a former boxer. The role of Jeonghwa, a woman who has a painful past in her heart and always makes her expressionless face smile, is played by Han Hyo-joo, who is loved by all ages through [Brilliant Inheritance] and [Dong-i]. Two people who make my heart flutter just by their name, I met in <Only You>. The film industry is shaking with the meeting of the best men and women who have captured Korea. However, the two actors did not rely on their own star qualities and put their best efforts for a more perfect performance. In particular, thanks to the special characters of a former boxer and a blind person, the two actors needed more preparation than ever before filming. So Ji-sub trained boxing for about a month and devoted himself to exercise, and Han Hyo-joo personally met the visually impaired and learned every little action of them. The passionate passion and effort of the two people, who clashed with their whole bodies solely for acting, will perfectly melt into the work and double the emotion of the movie.

<Eraser in my head>, <You are my destiny>
And 2011 <Only You>
<You Are>, which swept various film festivals and box offices in 2005 with <The Eraser in My Head>, a sensual video of a tragic but beautiful love with Alzheimer's as a subject, and a 'popular love play' between a woman with AIDS and a simple country bachelor. My Destiny>. Then comes another love story that captured the hearts of people in 2011. <Only You> is a beautiful and sad love story between Cheol-min, a man who closes his heart to a dark past, and Jeong-hwa, a woman who gradually loses her sight but never loses her bright smile. Director Song Il-gon, who challenges a full-fledged popular film with authentic melodrama with sincerity, tried to differentiate it from existing melodrama by adding modern mise-en-scène, sophisticated action, and sensuous sound. The intention was perfectly met, and it was selected as the opening film of the 16th Pusan International Film Festival. The love between Cheol-min and Jeong-hwa, which unfolds against the backdrop of the city we live in, such as the neon sign forest of buildings and the shabby backstreets, is expected to resonate with the audience and bring a melodic wind to Korea once again.

The Wizard of Story Director Song Il-gon
Reaching out to the public with his own melody!
Director Song Il-gon, who has been recognized for his skills by winning awards at world-famous film festivals such as the Cannes Film Festival and Venice International Film Festival, for his 100% handheld digital camera, 'Secret Camera' and 'One Take One Cut' films. However, his previous works left a regret that they did not particularly appeal to the public. This fall, director Song Il-gon tries to meet the public in earnest through <Only You>. “I wanted to make a film that could communicate with the public while pursuing sincerity,” he said, depicting the love story of young people who live without hope in Seoul, a city we are all too familiar with, but who needs love more than anyone else. And the story met the actors So Ji-sub and Han Hyo-joo to have a perfect visual. The drama, attractive characters, and perfect collaboration with the two actors who performed the best performances are enough to raise expectations for the movie. Director Song Il-gon creates a story with his own unique colors. Expectations are high as to what kind of repercussion his work will have on the audience.

Real but stylish!
The best video made by the best crew
<Taegeukgi is waving>,

A lyrical melody that falls in love the more you listen to it
Full of emotion! OST that doubles the emotion
In <Only You>, the emotional music captures the audience's ears as much as the beautiful screen. Among them, in the concert viewing scene, which can be said to be the first date between Cheol-min and Jeong-hwa, Alex and Horan of Clazziquai appeared and sang the song 'Flowers are blooming', as the title suggests, conveying the feelings of Cheol-min and Jeong-hwa, who gradually grow in love. Music director Bang Jun-seok, who was recognized for his skills by winning music awards at various domestic film festivals for <Radio Star>, <Go Go 70>, <A Joyful Life>, and <You Are Far Away>, also sang directly. The charming voice and the cheerful sound of strings, “I close my eyes, but I can feel you. Your warm voice and your gentle touch,” the lyrics fit perfectly with the images of Cheolmin and Jeonghwa sharing happy moments. The song [Only You], which has a clear voice, borrows the voice of 15-year-old Alice Moon. As a singer-songwriter who writes and composes herself even at a young age, her voice that director Song Il-gon directly recommended to music director Bang Jun-seok gives a deeper impression in harmony with the lyrical screen. In addition, Kim Beom-soo's [End of Love], which was used in the trailer that has already been released online and gathered a lot of attention, is attracting the attention of netizens along with the video. In particular, the harmony between the image of Cheol-min, who takes a step back and tears away in front of Jeong-hwa, and the lyrics, “You, only you, my first love, my last love” is a point that stimulates the tear glands. The music of <Only You>, which sometimes conveys excitement and sometimes sadness, will become an emotional medium that conveys the excitement and pain of love to the audience this fall.

Fun and reality are ours!
A superb performance by a luxury supporting actor that shines in the movie
<Only You> presents both fun and reality at the same time with the powerful acting of the leading supporting actors. The combination of Kang Shin-il and Park Cheol-min, who are the boxing directors and coaches who are like Cheol-min's teachers, gives unexpected laughter to the audience while showing off their unique comfortable acting. Oh Gwang-rok, who is loved for his unique voice and acting style, showed off his presence as Park Chang-soo, who had an accident due to Cheol-min's dark past. Jo Seong-ha, who has been playing the role of gentle men, called 'honey vocal cords' and 'middle-aged', has successfully transformed into a mean figure by taking on the role of a gambling and martial arts broker. Jin-goo, who usually made a special appearance because of his friendship with Han Hyo-joo and the staff of <Only You>, played a big role in dramatically leading the drama by misunderstanding Cheol-min as Jeong-hwa's lover between Cheol-min and Jeong-hwa, who unfortunately broke up.
In addition to the actors who are familiar with us, the cast who make use of the reality of the movie also upgraded the perfection of the work. Among them, Seungbae Wi is a 'true champion' who won the 2006 Spirit MC Interleague Heavyweight Champion. So Ji-sub even left the impression that “I filmed it to die for life” after filming the actual fight scene with him. Kim Ga-bin, who appeared as Jeong-hwa's telemarketer motive, was a mentor to Han Hyo-joo, who first challenged acting as a visually impaired theater actor, and helped Han Hyo-joo to immerse herself in Jeong-hwa. The passionate performances of the supporting actors, who boast a unique presence comparable to that of the main actors, provide another fun thing in addition to the transformations of So Ji-sub and Han Hyo-joo in <Only You>.