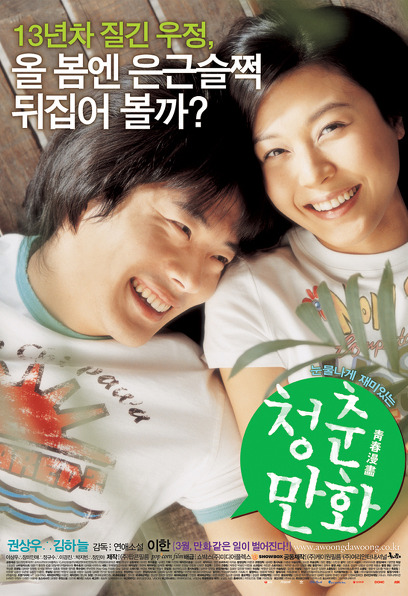 13 years of tough friendship
Shall we turn it upside down this spring?

Ji-hwan-Dal-rae, the antagonist of the century that has been together for 13 years.
Ji-hwan (Kwon Sang-woo) and Dal-rae (Kim Ha-neul) have grown up in the same neighborhood since childhood. Jihwan and Dallae, who entered the same school side by side all the way to college, are still best friends with each other. Ji-hwan, who respects Jackie Chan and dreams of becoming a world-class action actor, and Haru-ra, an aspiring actor who wants to act with her heart, fight fiercely and talk about each other's wealth without hesitation. live.

each other had lovers. But it's not nice
Then, one day, Dal-rae got a boyfriend named Young-hoon, who is a taekwondo student and an all-round sportsman, like Ji-hwan, and Ji-hwan has a girlfriend named Jimin, a beautiful woman with arms and legs that can't be compared to Dal-rae. A strange current began to flow as the friendship between the two young friends, who seemed to have no problem, became lovers.

The comic action romance fantasy of reckless youth and immature youth begins!!!
Everyone else knows, only they don't. Jihwan and Dallae's strange feelings are more than friendship… After being friends for 13 years, when they can't easily accept the feeling of love, ordeal comes before them, and the two of them miss each other desperately…

Youth is a cartoon…

youth = cartoon
whatever you do it's fun
can do anything
Love, friendship, sadness, betrayal, jealousy… headache
funny to tears
be dramatic
not bored
cry and laugh
I cry even when I laugh
broken heart lasts a long time
Once you have a lover, you feel like you have the whole world.
There are many things that everyone knows, but only the locals don't.
There are a lot of special characters around you who don't seem to be able to adapt to society.

no different from cartoons
young men and women
cartoonish story

Korea's strongest duo, Kwon Sang-woo and Kim Ha-neul are back!
In the spring of 2006, Korea is turned upside down because of them!!!

Korea's strongest duo, Kwon Sang-woo and Kim Ha-neul, was created by <Teaching Same-agers>, which caused a nationwide box office hit with 5.2 million in 2003. They got together once again for the spring of 2006!!!

It has been three years since Kwon Sang-woo, a so-called good-looking guy with a good body and a good fight, was tutored by a tutor, Kim Ha-neul, of the same age. In the meantime, the best cheerful couple like Kwon Sang-woo and Kim Ha-neul has not been born, and for many who have been waiting for their reunion, <Youth Manga> is the best news.

In <Youth Manga>, the couple Kwon Sang-woo and Kim Ha-neul play a character that reminds everyone of the word 'positive'. Jihwan, who has a pleasant smile just by looking at him, is sometimes reckless, but he is a cheerful character who always seems to do only pleasant and happy things.

In addition, the cute and charming Soothing, who can be anyone's ideal type, is a lovely character who constantly strives to overcome her shortcomings. The <Youth Manga> they are weaving is a youthful romance that is created by cultivating 13 years of friendship into love.

A delightful and cheerful duo, Jihwan-Salae couple, who upgraded the comic of <Teaching Students of the Same Age>, and Kwon Sang-woo, the greatest transformational genius in Korea, and Kim Ha-neul, a master of comedy melodrama, meet. There has never been, and will never be, a more cheerful couple than these.

Wherever they go, laughter follows.
In the spring of 2006, the Republic of Korea turns over with Kwon Sang-woo and Kim Ha-neul couple.

<Youth Manga> is an 'action' manga.
There has never been such an action before.
Bruce Lee, go to Jackie Chan!
Kwon Sang-Woo's Action Hero is here!!

Kwon Sang-woo, the hot-blooded Bruce Lee kid from <The Story of Cruelty>
This time, I am reborn as a true Jackie Chan!!!

From head to toe, it has an appearance that reminds me of Jackie Chan and his wit.

Like a stuntman aspiring student in Taekwondo, the situations surrounding Ji-hwan are reminiscent of action comics and show the dramatic fun of cartoons without filtration. Dangerous stunts that narrowly pass between running buses on a bicycle and jump onto a truck running at high elevations, a thrilling race match with Soo-Rae's boyfriend Yeong-Hoon, and Ji-Hwan in the movie 'The Monster' In scenes such as 'the garrison', there is a high level of action behind the comic. As such, in <Youth Comic>, Kwon Sang-woo's muscular body and animalistic nerves, as well as an action sense comparable to any professional action actor, are shown in front of the audience without regret, and <Youth Comics> is filled with various action attractions unique to <Youth Comics>.

Fighting for 13 years,
everyone else knows
Their innocence that only the others did not know!
Between love and friendship… They start to shake!

For 13 years, I spent 13 years arguing with Aong Daong in one town.
Jihwan and Soothing are the best friends to each other.

You can meet the episodes in the movie that are as fun and sweet as the pure cartoons that surround the two.

<Youth Manga>, which contains laughter, emotion, and the love story of those who are affectionate and sweet, is the same feeling that makes your heart flutter as you flip through the pages of a pure manga when you read it.

Ji-hwan and Da-lae are the perfect match for anyone looking at them, but the strange feelings between the two that only they themselves do not know. They laugh and cry at each other for 13 years without even being aware of their feelings beyond friendship. <Youth Manga> presents a definition of friendship and love that anyone can relate to by capturing the complex emotions and fun episodes that occur between friends of the opposite sex who are more comfortable than same-sex friends.

It's not just a comedy of forced laughter, it's not a new wave melodrama that makes you cry, but a youthful romance that moves from the 13-year friendship between Ji-hwan and Da-lae, pure and cute, to love. In addition to comfortable laughter and heartbreaking emotions, <Youth Manga> will unravel cheerful and lively stories one after another by adding a mischievous joke to the pure emotions of quirky cartoon characters and pure cartoons.

The definitive edition of all comic dances ever released!
We are also releasing a karaoke scene on Creep Day!

Even before the release of <Youth Manga>, a scene in the movie has become a hot topic for many people. That's the karaoke scene loved by the whole nation! Audiences who remember the laughter karaoke scenes in <The Little Bride>, which made Moon Geun-young the nation's younger sister, and <All the Heads-on> and <All the Fighters> will know the power of the karaoke scene.

In <Youth Manga>, the scene that overwhelms the crowd in a moment and makes them crawl and steal, it is a stage of passion where Kwon Sang-woo and Kim Ha-neul form a fantastic costume at a karaoke room. The karaoke scene in <Youth Manga> is a hundred times more powerful than any other movie. The actors spared no effort in filming the karaoke scene, choreographing choreography and live vocals that match the lyrics of 'One and Half' by Tutu, a famous song of memory.

This scene, filmed at a karaoke room in Gangnam, was made with the guidance of a professional choreographer and an ad-lib of the actors' moments. Kwon Sang-woo and Kim Ha-neul overcame difficulties such as dehydration due to repeated shooting with numerous NGs and created a karaoke scene that boasts the best breathing as a scene that will go down in history.

Kwon Sang-woo, who said, 'I had to breathe more harshly than any other action scene', said about Kim Ha-neul, 'I'm still in trouble now and in <Teaching for the same age>. I am so much better,' which made the staff laugh, and Kim Ha-neul was very satisfied with the scene being filmed, saying, 'I had to be more faithful to my emotions than acting in the cold water in a horror movie'.

<Youth Manga>, which tells the story of a 13-year-old couple named Ji-hwan and Dal-rae, was filmed in a press village in Bulgwang-dong, Eunpyeong-gu. Director Lee Han, who chose Giza Village as the filming location, said that it is a 'really attractive place' and said that he chose the Giza Village in the sense that he wanted the audience to feel the long-standing friendship between Ji Hwan and Dal-rae even in the spatial setting.

Gihwan Village, which retains the appearance of 20 years ago, was the perfect neighborhood for Jihwan and Dallae to grow up together for 13 years in the movie. The background of <Youth Manga> was perfectly digested to the extent that it felt like a set.

Giza Village, which is Seoul but not like Seoul, is densely packed with single-story houses on multiple floors in an alley that only one car can pass through. <Youth Manga> also deals with the sweet story of cute young men and women, so the video created in the Giza Village as a background even feels like they are telling their story.

Besides, Ji-hwan's goofy hair, which is ridiculously ridiculous to look at by other people, the stubbornness of Soo-rae that takes three months to hold hands with her boyfriend, which is not like a new generation, and the honesty of young people who are recklessly trying to become stuntmen and actors have changed over the past 20 years. It is very similar to the reporters village, which is still standing there.

Kwon Sang-woo, who has a great body, performed Jeolla for the first time.
The muscular body that has been strengthened through exercise is the representative example of Korea's best physique, which is praised by most people of all ages and genders. Kwon Sang-woo's attractive body was revealed to the public through <Youth Manga>.
The day Kwon Sang-woo's naked shower scene was filmed was different from other filming days, and despite the sub-zero weather, the heat of Yangsu-ri's set was burning brightly.
In the shower scene in which all the female staff stayed on set despite the cold weather, Kwon Sang-woo finished his workout and took a quick shower in the bathroom. It is an open scene.
The staff applauded Kwon Sang-woo's efforts to always act faithfully, and his passion and effort seem to be melted into the character of Ji-hwan, who dreams of becoming the best stuntman.