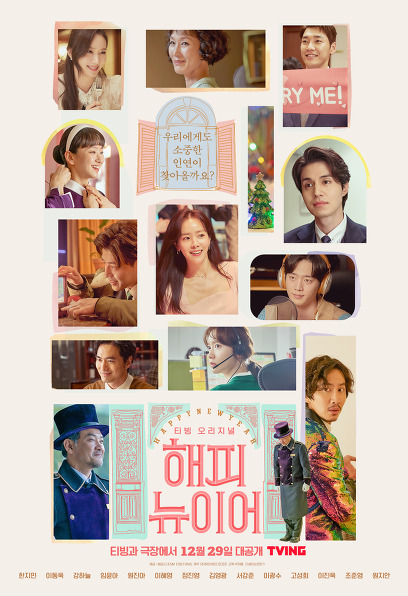 Will a precious relationship come to us as well?

Hotelier Sojin, who hesitates to confess to her boyfriend for 15 years
'Seunghyo' announcing a super-fast surprise marriage with his girlfriend 'Youngju' without knowing the speed of such exhaustion
Hotel representative 'Yongjin' who has everything but suffers from even-numbered obsessive-compulsive disorder
Housekeeper 'Lee Young', who gave up her dream of becoming a musical actress and jumped into the front line of life
5 years after failing the civil service exam, an unexpected wake-up call from 'Jae-yong', a hotel guest who has nothing to do
Singer 'Lee Kang' and manager 'Sang Hoon', who are in their prime after a long obscurity, are about to hold their last concert together.
Hotel signboard doorman 'Sang-gyu' accidentally meets his first love 'Catherine' again after 40 years
Every Saturday, in the hotel lounge, waiting for a new relationship with the opposite man 'Jinho'

First, Han Ji-min, who has been reborn as a trusted and watched actress by swept the Best Actress Award at domestic and international film festivals with the movie <Miss Bag>, takes center stage as the manager in charge of Hotel Emros and 'Sojin', who is hesitant to confess to her boyfriend for 15 years. Lee Dong-wook, who is loved for his romanticism that transcends the human realm, from 'Goblin''s 'Goblin' to 'Gumiho' to 'Gumiho', takes on the role of 'Yongjin', the representative of Hotel Emros with even-numbered obsessive compulsive disorder. shows In addition, Kang Ha-neul, who boasts a wide acting spectrum such as the movies <Youth Police>, <Resentment> and <Dong-ju>, and the drama [When the Camellia Blooms], plays the role of 'Jae-yong', a job-seeking student who has failed the civil service exam in the fifth year. Lim Yoon-ah, who has become a popular actress through the movies <Cooperation>, <Exit> and <Miracle>, appears as a hotelier 'Soo-yeon', who announces the start of the day every morning with extraordinary pride, and the eyes and ears of the audience capture the Jin-ah Won, who is continuing her unstoppable journey from the movies <Money> and <Voice> to the Netflix series [Hell], will show various charms as a housekeeper 'Lee Young', who gave up her dream of becoming a musical actress and jumped into the front line of life.

Meanwhile, veteran actress Lee Hye-young, who has dominated the stage, screen, and CRT with overwhelming charisma, is a Korean businessman Catherine, who returned to Korea to attend her daughter's wedding. It transforms into 'Sang-gyu', the signboard doorman of Emross, and presents a fond lingering aftertaste of an old love that they met again after 40 years. Seung-hyo, a boyfriend who announced a surprise marriage to So-jin, was cast in the movie <Mission Possible> and the drama [Hello? It's me!], played by Kim Young-kwang, who played an active part in the screen and the CRT in 2021, shows off the charm of a real-life boyfriend. After a long obscurity, singer-songwriter and radio DJ 'Kang Lee', who saw the light of the charts by running backwards after a long period of obscurity, ends his contract with Seo Kang-joon, who has shot women's hearts with his stable acting and sculptural visuals such as [WATCHER] [Are You Human?] The emotional explosion manager 'Sang-Hoon', who has both entertainment and acting, takes on the role of Lee Kwang-Soo, the representative multiplayer of Chungmuro, who has caught both rabbits, and presents a deep bromance. In addition, Ko Seong-hee, who radiates various charms in each work such as [Wind, Cloud and Rain], [Mother] and [While You Were Sleeping], is a pre-bridal 'Youngju' who is in trouble before marriage, and is unique regardless of genre, from melodrama to fantasy to action. Lee Jin-wook, who reveals his presence, draws attention by appearing as 'Jin-ho', who waits for his relationship in the Hotel Mros Lounge every Saturday. Finally, Chungmuro new face Jun-young Jo and Ji-an Won, who are about to make their screen debut, meet as high school swimmer Sejik and figure skating prospect Ayoung to convey the fresh excitement of first love.

<Happy New Year>, which completed such a variety of casts, is expected to feature a 14-person, 14-color harmonious acting ensemble, and director Kwak Jae-yong, who directed the film, said, “All actors who participated to empower the various characters and stories in the scenario. thank you guys They were very talented actors, so I was able to finish the movie very happily.”

100 times empathy
From fresh first love to heartbreaking unrequited love, to faint old love
The story of all of us that we want to share with our precious relationships during the year-end and New Year holidays!

The movie <Happy New Year>, which unfolds in the background of a hotel during the year-end and New Years where many people stay, leave, meet, and part, is a movie about people who visit Hotel Emros with their own stories to make their own connections in their own way. contains a story.

In December, Hotel Emros is bustling with people coming and going in a lively atmosphere ahead of Christmas. Hotel manager So-Jin (Han Ji-Min) is thrilled to hear that she will receive a confession from a fateful man within this year. 'Seung-hyo' introduces his marriage partner 'Young-ju' (Ko Seong-hee) without knowing the speed of others, and 'So-jin' even takes on counseling for 'Young-ju' to make matters worse. 'Yongjin' (Lee Dong-wook), the representative of Hotel Emros, who has everything but is suffering from severe even-numbered obsessive compulsive disorder, stays in a hotel suite for a while, and meets 'Lee-yeong' (Won Jin-ah), a housekeeper who dreams of becoming a musical actor and even-numbered man. often meet Jae-yong (Kang Ha-neul), a job-hunting student who has neither a job nor a relationship, visits Hotel Emros to spend the last week of his life in despair. Another hotel guest, 'Catherine' (Lee Hye-young), recalls old memories with her first love, the hotel doorman 'Sang-gyu' (Jung Jin-young), who happened to be reunited after 40 years. On the other hand, singer Lee Kang (Seo Kang-joon) and his manager, Sang-hoon (Lee Kwang-soo), who reached their heyday after a long period of obscurity, are like a family who spent difficult times together, but as the contract expires, Sang-hoon becomes a stumbling block. It's like my heart is troubled Sejik (Jo Jun-young), the younger brother of So-jin, who secretly has a crush on the school queen 'A-young' (Won Ji-an), gets nervous among the friends who confess to 'A-young' ahead of Christmas. Every Saturday, a professional man 'Jin-ho' (Lee Jin-wook), who waits for his relationship at Hotel Emros, is rejected every time for some reason, raising the curiosity of the hotel staff.

“The feeling that many characters and their emotions fit together like a gear” (Kang Ha-neul), “The process of characters with their own stories meeting each other and completing their lives” (Lee Hye-young), “The love and friendship of each generation As the actors say, “Comfort” (Jung Jin-young), “Fun to find and empathize with stories similar to mine” (Kim Young-kwang), “It can heal a corner of your heart” (Seo Kang-joon), and “A friendly story that can happen around you” (Lee Jin-wook) Director Kwak Jae-yong expresses the story of all of us, sometimes sad, sometimes lonely, and sometimes happy to tears, with a unique delicate sensibility. Just like his directing intention, “I wanted to portray the diverse emotions of various people from high school to middle-aged people,” the 14-person, 14-color story that can be sympathized by all men and women, from fresh first love to heartbreaking unrequited love to faint old love, will move the hearts of the audience.

From <Watercolor on a Rainy Day>, which led the youth film boom in the 1990s, to <My Sassy Girl>, which created a syndrome throughout Asia and completed the prototype of Korean romantic comedy, and <Classic>, which is called the bible of Korean melodrama. Director Kwak Jae-yong, who made a mark in Korean romance films by giving a deep impression to the audience with a solid story, attractive characters, and beautiful visuals, has produced works and box office success such as <Inside Men>, <The Managers of Namsan> and <Save Me from Evil>. In partnership with Hive Media Corp, a production company that has released a series of recognized films, he returns to the romantic film <Happy New Year>.

Director Kwak Jae-yong, who said, “I hope that the audience will be immersed and immersed in the many emotions felt by various characters,” said, The 'non-face-to-face romance' of a man who is comforted by the perfect other person, the 'twilight romance' of an old love who met again after 40 years, the 'bromance' of those who struggle between loyalty and reality, the 'first romance' of a teenage boy's life ' and 'Romance Alone' of a man waiting for his relationship to appear, a love story of 14 people and 14 colors with a warm and pleasant gaze.

“A movie that conveys happy energy and good energy” (Han Ji-min), “A cold winter, a movie that will warm your heart” (Lee Dong-wook), “A story you want to see with your loved ones during the year-end and New Years” (Yoon-ah Lim), “The year-end background The fairy tale atmosphere and the cute and petty appearance of the couple are attractive” (Jinah Won), “A film that can melt your heart for a while, necessary in these times” (Kwangsoo Lee), “Pretty, exciting, and witty work” (Sunghee Ko) , “A film that calms and warms the heart” (Jo Jun-young) and “Exciting Christmas and New Year’s emotions” (Won Ji-an). It heralds the birth of the most special romance movie this winter with added sensibility. Here, from the splendid Christmas to the exciting New Year's countdown party, it captures the excitement-filled year-end atmosphere as it is, and is gathering anticipation from prospective audiences with the year-end season movie that you want to watch with your loved ones.

The movie <Happy New Year>, which will be available at both TVING and theaters in December, is expected to warmly color the end of the year and satisfy the expectations of the audience ahead of the new year.