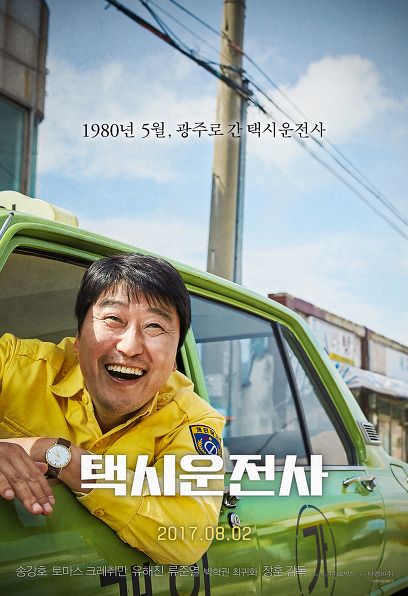 In May 1980, a taxi driver in Seoul. "Gwangju? Don Wary, Don Wary! “I’m the best driver”
Taxi driver Man-seop (Song Kang-ho) goes to Gwangju with foreign guests and returns before the curfew.
He said that he would give me 100,000 won to pay off the overdue monthly rent.
With a German journalist Peter (Thomas Kretschmann) on board, he sets out on the road without knowing English.

Gwangju and people. “I don’t know, Uderl also came to Uderl… ”
Gwangju finally entered Gwangju after breaking through the gates to Man-seop's base, where he had to pay for a taxi somehow.
Despite Manseop's persuasion to return to Seoul because it's dangerous
Peter begins filming with the help of college students Jae-sik (Ryu Jun-yeol) and Hwang-gi (Yoo Hae-jin).
However, the situation becomes more serious and Man-seop becomes more and more anxious about his daughter who will be alone at home…

The movie "Taxi Driver"
Raising the topic of “What do people live by?”

Before the grand question of 'Why Gwangju again in May 1980?', the movie <Taxi Driver> starts with people's stories.
Kim Man-seop (Song Kang-ho) is an ordinary taxi driver in Seoul who raises a young daughter alone with an old taxi cab. He takes a foreign customer to Gwangju to earn a taxi fare, not knowing what's going on in Gwangju. German journalist Jürgen Hinzpeter (Peter) (Thomas Skretschmann), who got into his taxi, calmly says, 'A reporter goes wherever there is an incident.' What these two have in common is that they are faithful to the basic 'doing' of humans. <Taxi Driver> starts from Man-seop's duty to get customers safely to their destination after receiving a taxi fare, and Peter's duty to inform them of what is happening in the isolated Gwangju.
The same goes for the Gwangju people they meet. Hwang Tae-sul (Yoo Hae-jin), a small citizen taxi driver who is the father and father, and Koo Jae-sik (Ryu Jun-yeol), an ordinary Gwangju college student who was not usually a sportsman. But in terms of conscience, common sense and human duty, they do what they can. He only does what he ought to do as a person against the things that people shouldn't do before he has a deep sense of duty or belief.
Through these characters in <A Taxi Driver>, we ask a simple yet fundamental question, 'What do people live by?' And their stories, as ordinary people, lead to the question 'If I were there?', suggesting that it could be 'our business now,' not just 'someone else's business in the past'.

German journalist Jurgen Hinzpeter who covered Gwangju & Kim Sa-bok, the taxi driver who took him
In May 1980, Gwangju was brought to the screen with the motif of a real person.

“I just wanted to see the truth with my own eyes and tell it. Without the courageous Korean taxi driver Kim Sa-bok and the young people of Gwangju who helped with their dedication, the documentary would not have been able to come out in the world.” The motif of <Taxi Driver> was a single line of newspaper article about Jurgen Hinzpeter, a German journalist who received the 2nd Song Geon-Ho Media Award in 2003 for his contribution to democratization in Korea.
Jurgen Hinzpeter, the only one who reported the reality of 5.18 to the world by covering Gwangju, breaking through the strict media control under martial law with the documentary 'Korea at a Crossroads'. And in May 1980, Kim Sa-bok, who was an ordinary citizen who brought Hinzpeter into the middle of Gwangju with Hinzpeter, and who even Hinzpeter could not find again, remained anonymous on the screen. The road to Gwangju, the people they met in Gwangju, and <Taxi Driver>, which follows the path in the mind of a taxi driver in the process, is vivid from the perspectives of the two people who were real. paid

Kang-ho Song, Thomas Kretschmann, Yoo Hae-jin, and Ryu Jun-yeol meet for the first time!
Synergy created by the collaboration of the mind!

Generations, nationalities, and personalities are all different. However, the fact that he is an 'actor who moves the heart' of the audience by reviving the human drama of the character in three dimensions is common. Kang-ho Song, the actor that Koreans trust the most, and Thomas Kretschmann, a famous actor who has met audiences around the world across Germany and Hollywood, and Yoo Hae-jin, who casts the deep humanity inherent in any character. And Ryu Jun-yeol, who became an icon of youth where dreams and pain coexist. These four actors meet on one screen for the first time through <Taxi Driver>.
<Taxi Driver> must have been a difficult choice for each of them. However, the four actors communicated with each other by delicately and realistically portraying the human essence, worries, and joys and sorrows of the character, which could have been lost under the weight of the material of <Taxi Driver>. Also, after the 5.18 incident, he completed <Taxi Driver> by representing each person who has never been properly reconstructed. A Seoul taxi driver and a German reporter, who do not speak the language, accompany them, until the position of the two people, who were in the driver's and back seats when they left Seoul, passes through Gwangju and changes to the driver's and passenger's seats. Kang-ho Song and Thomas Kretschmann showed a natural exchange of hearts. And Yoo Hae-jin of Hwang Tae-sul, a taxi driver in Gwangju, who treats them with a simple sacrament, and Ryu Jun-yeol of Gu Jae-sik, a Gwangju university student who rides Man-seop's taxi together and helps interpreters. The first meeting of the four actors, who transcends all differences including language, will move the hearts of the audience once again, achieving a collaboration of hearts.

The 1973 Brissa turned 45 this year, the 42-year-old, and the 1976 Pony. Man-seop's taxi, which is Man-seop's workplace and living space, and also the main space of Peter and Man-seop, determines the visual impression of the movie, and at the same time the audience follows the taxi's journey, so 'what car model and color to choose' It was the main mission. Hwang Tae-sul's Gwangju Taxi also contains the symbolism that represents all taxis in Gwangju, so 'Taxi' in <Taxi Driver> took the same amount of effort as casting another lead.
The car model was quickly decided according to the feeling of the character. Seoul taxi driver Man-seop's taxi is not square, but the rounded shape of 'Brisa' fits the character well. In addition, in that it is a model that was not easily encountered in existing movies, it has a feeling in line with the film of May 1980 with a new perspective and the character 'Kim Sa-bok', which has never been reproduced. Gwangju taxi driver Hwang Tae-sul, Jeong Man-seop Taxi is a different type of taxi to differentiate it from Man-seop taxi, but 'Pony', which has a friendly image as it often appears in existing movies, was selected.
It took a long time to decide on a color and its hue. At that time, there were a lot of sky blue, yellow, and green taxis, and among them, the production team decided that green was suitable for naturally blending into the screen. But the color was the key. It has been painted with different brightness and chroma to create a 'green' that is bright and warm, yet not tired and not light even after watching over and over. Finally, Man-seop's green 'Brisa' and Hwang Tae-sul's 'Pony' were born.

A road with the atmosphere of the 80s, born after 5 months of site hunting!
Geumnam-ro in Gwangju reproduced in real size!

'How to recreate May 1980' was a challenge for the staff. It was because of the conflicting mission that it should be recreated into a cinematic world in the eyes of young audiences who did not live in that era, without creating a sense of alienation to the audience who lived in those days.
The staff, who accepted the difficult mission, found the answer in the characters in the movie. I thought that the gaze of a young audience who did not live in those days was the same as that of a Seoul taxi driver and a German reporter in the movie. Young audiences like Manseop and Peter had to feel unfamiliar with the way of that era. On the other hand, Geumnam-ro in Gwangju exerted a sense of balance to express the familiarity of Geumnam-ro seen by the people of Gwangju in the movie so that the audience who lived at that time did not feel a sense of alienation.
The production team conducted a location hunting for 5 months to find a path that left the feeling of the 80s in the rapidly changing Korea. As a result, the 80s roads were revived by finding and mosaicing in more than 9 areas across the country, including abandoned highways in Jangseong and side roads in the forest, Gwangju, Masan, Suncheon, Hapcheon, Daejeon, Gimcheon, Yangyang, Boryeong, and Uiseong.
Geumnam-ro, viewed from the perspective of the people of Gwangju, considered 'liveliness' as the top priority. Although the actual street remained on Geumnam-ro, where the most dramatic moment would unfold, it was impossible to film there because there were changes as 40 years passed. In the end, it was decided to build an entire open set, and Geumnam-ro in May of the 1980s was reproduced in real size on an empty lot in Gwangju. Geumnam-ro in Gwangju, which is reproduced in 100% the same size, adds reality by filling in the scale of the square and the details of the buildings.

Cho Yong-pil's famous song 'Short Hair' appeared in Korean movie for the first time!
Meet Song Kang-ho and <Taxi Driver>!
Sand Pebble's 'What Do I Do', Hye Eun-i's 'The Third Hangang Bridge'
Hear the times and character with emotion!

Sometimes, a song acts as a time machine that brings back memories of that time. Among them, 'Short Hair' by Cho Yong-pil, an immortal song that was released in 1979 and became a national song, has established itself as a masterpiece that represents the sensibility of many Koreans at that time. Despite this, he never appeared in many Korean films, but was first inserted in <A Taxi Driver>.
I needed a song that was a melody in Man-seop's taxi and sung while he was driving. Because it had to be a hit song representing the time that can show the essence of the movie, the story of ordinary people, and the character of Man-seop, who is bright and strong in life even in difficult daily life, the production team chose 'Short Hair', which has been established as a national song, as the first priority. raised Considering that it had never been used in a movie, I thought it would be difficult, but I knocked on the high door of 'short hair' with a feeling of 'just in case'. And Cho Yong-pil lent the 'short hair' to <Taxi Driver> at once after only hearing about the main actors 'Song Kang-ho' and 'Gwangju in May 1980'. Thanks to this, the audience will be sucked into those days from the cheerful first verse of 'the girl who gave me a bouquet of flowers someday~' and will be sucked into Man-seop's taxi at once.
In addition to this, Sand Pebble's 'What Do I Do', the grand prize song of the 1st University Music Festival in 1977, which is a favorite song of Gwangju University Student Gu Jae-sik, who dreams of going to a university song festival, and Hyeun-i's 'The 3rd Hangang Bridge'. <A Taxi Driver> is the representative hit song of the era, bringing the emotions of the characters to life in the audience's ears more deeply.