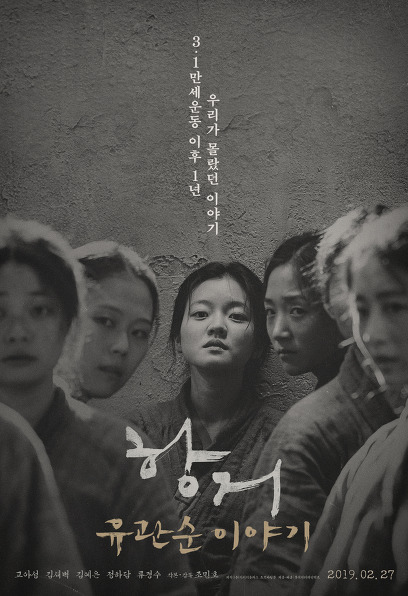 After the March 1st Independence Movement in 1919, Yu Gwan-sun and the women in Room 8 lived in Room 8 of the Seodaemun Prison, which was less than a share of space, and had a more free spirit than anyone else for a year.
[ ABOUT MOVIE ]

Another deep resonance and emotion from the production team of <Princess Deokhye>!
A year after the March 1st Independence Movement in 1919, the story of 17 Yu Gwan-sun that we did not know!

Director Jo Min-ho, who moved the story of Yu Gwan-sun a year after the March 1st Independence Movement in 1919, which we did not know, on the screen, said, “I hope that through the appearance and courage of Yu Gwan-sun, the women in Room 8, and ordinary people, I hope to regain the dignified eyes and hope that I had lost.” Like the wind of the movie <Revolt: The Story of Yu Gwan-sun>, it is expected to give the audience an unforgettable and warm impression.

Go Ah-seong, the actor chosen by the master directors! Predicting a passionate performance in life with sincere acting!
New actors such as Kim Sae-byeok, Kim Ye-eun, and Jeong Ha-dam are paying attention to their performances!
In the movie <Revolt: The Story of Yu Gwan-sun>, Korea's representative actor Go Ah-seong, as well as Chungmuro's individualistic actors, show their presence that fills the screen. First of all, Go Ah-seong, who is loved by master directors representing Korea such as Bong Joon-ho, Hong Sang-soo, and Han Jae-rim, will take on the role of 'Yoo Gwan-soon' and captivate the audience with his extraordinary life performance. Go Ah-seong, who showed a strong presence by showing a wide range of acting skills in various genres such as <Thought of My Brother>, <Elegant Lie>, and <Beauty Inside> After receiving the invitation, he established himself as a true actor. Recently, through dramas such as [Life on Mars] and [Self-illuminating Office], he is building a solid filmography that crosses the screen and the CRT with sympathetic acting representing the youth of Korea. “Go Ah-seong is an actress who has the sad feeling of life that I saw through Yu Gwan-sun’s eyes. As director Jo Min-ho said, “He is an actor who is very good at understanding and empathizing with other people’s lives. I drew Yu Gwan-sun. In particular, when filming Yu Gwan-sun, who was barely able to eat due to torture, he tried to completely immerse himself in the character, from the inside and the outside, by actually fasting for 10 days and feeling the pain that Yu Gwan-sun would have felt, despite the opposition of the people around him. Without any pretense or setting, actress Go Ah-seong, who sincerely sympathized with Yu Gwan-sun's life, will deliver a deep resonance through this <Revolt: The Story of Yu Gwan-sun>.

It is also worth noting the performances of the three actors that Chungmuro is paying attention to. Actress Kim Sae-byeok has appeared in a number of independent films, such as <Jultakdongsi> and <A Midsummer's Fantasia>, and has a strong fan base for her impressive acting. He will take on the role of 'Kim Hyang-hwa', a gisaeng who led the national independence movement with 30 gisaengs in Suwon, and will captivate the audience with his charismatic eyes and voice. Next, actress Kim Ye-eun, who recently showed an impressive performance in the drama [Kingdom], took on the role of Kwon Ae-ra, Yu Gwan-soon's senior at Ewha Hakdang. Kim Ye-eun, who showed an amazing synchro rate with a real person, drew her ensemble with actress Go Ah-seong while sincerely expressing her heart. Here, actress Jeong Ha-dam, who emerged as the muse of the independent film industry by making a snow stamp through <Wild Flower>, <Still Flower>, and <Ash Flower>, took on the role of 'Ok-Lee', a coffee shop employee, in <Revolt: The Story of Yu Gwan-sun>. It is planned to leave a strong impression on the audience once again by expressing a person with a will to fight against Japan.

Seodaemun Prison 'Yeooksa Room 8', the story of countless women with Yu Gwan-sun!
The courageous cry of Yu Gwan-sun and women for freedom and liberation!
The movie <Revolt: The Story of Yu Gwan-sun>, which will be released meaningfully in commemoration of the 100th anniversary of the March 1st Independence Movement, not only looks into the heart of Yu Gwan-sun, an ordinary 17-year-old girl, but also talks about the friendship and solidarity of women who stood up to the Japanese in a small prison of less than three pyeong. It has a hot story. To us, the March 1, 1919 national independence movement is a familiar story that we have heard in textbooks, but since then, the story of Yu Gwan-sun and the women in Room 8, who started their imprisonment in Seodaemun Prison, has never been properly introduced considering their importance. Also, one year later, on March 1, 1920, to commemorate the first anniversary of the national independence movement, the story that the national independence movement began in 'Yeooksa Room 8' is also a part that is not well known to us. At that time, in the prison in Room 8, besides Yu Gwan-sun, Kim Hyang-hwa, a gisaeng who led the protest with 30 other gisaengs from Suwon, Lee Ok-i, a coffee shop employee, Kwon Ae-ra, a senior at Ewha Hakdang Yu Gwan-soon, and Man Seok-mo, who started the national independence movement after losing their son while doing business in the market. There were various characters that we must remember together, such as , Im Myeong-ae, who raised children despite all the hardships as a prisoner with children. The director uses black-and-white close-ups to capture the complex and subtle emotions and longing for freedom, so that they can focus on the emotions of each character, and even a very small figure in the prison is not an extra, but is actively active on the theatrical stage. They hired actors to create a directing that puts strength into their eyes and every gesture. The independence activists 100 years ago had to walk in a circle to keep their feet from swelling in a space so small that they couldn't sleep while standing in an environment that was unimaginable today with only one pair of clothes for all four seasons. Their courageous cries, who resisted the Japanese colonial rule until the end in difficult circumstances, will make us feel awe beyond mere emotion 100 years later. In addition, it will be an opportunity to re-examine the lives of various independence activists who were ordinary women, not just the great men we were accustomed to in the March 1st Independence Movement.

Beautiful mise-en-scène in black and white!
Capturing the expressions and feelings of the actors!
In the movie <Revolt: The Story of Yu Gwan-sun>, Gwan-sun's memories of the past and scenes with his family are expressed in color, and scenes in prison are expressed in black and white. It was shot with a digital camera and then edited in black and white and color. Black and white allows you to feel the restraint of emotions that achromatic colors give by removing the splendid colors, which focus on Yu Gwan-sun and the women in Room 8 of Seodaemun Prison, making it possible to pay more attention to their lives and actions. Regarding this, director Jo Min-ho said, "As the film's plan was intended, I thought that the character was the most important element to pay attention to, and I thought that we should put effort into capturing the spectacle of the character itself." If there is a landscape or space, it can feel stuffy if it is expressed in black and white, but it is judged that black and white is a mise-en-scène that is no longer possible to focus on the characters in a limited space called Oksara. Director Jo Min-ho said, "I didn't want the audience to look away by directly showing scenes that are difficult to see, such as the torture scene that Yu Gwan-sun would have suffered in real life. Rather than expressing it raw, I wanted to express it in black and white so that the audience could imagine it.” In particular, the scenes of about 30 women in Yeooksa, which is less than 3 pyeong, are more special and affectionate than any other space. give.

The current appearance of the prison in the Seodaemun Prison History Hall is different from the prison in 1919, as it was built and expanded by the government of the Republic of Korea after liberation. At that time, the prison was in the form of a barn in a container building and had a poor structure with no toilet, no warmth even in the cold weather that stabbed the skin, and it was recorded as the worst space without medical facilities. The production team reproduced this Seodaemun Prison as a set inside the prison, and the exterior and hallway shots were reproduced in the present space with historical evidence as much as possible. A veteran staff member of Chungmuro, In-Jun Hwang of art (<Disappeared Night><Brothers><Haeundae><Radio Star>), Hyungyu Hwang of makeup (<1987><Wandeuk><Uncle><Mother>), and Sang-Kyung Cho of costumes (< Together with the Gods> <Witch> <Taxi Driver> <Namhansanseong>), etc.) worked together, and we tried to recreate the space and art that could feel even more miserable because it was too realistic. Details such as the fact that prisoners who lived in prison at the time lived barefoot without even wearing underwear are reflected in the film, stimulating the hearts of the audience. In particular, the scene expressing hope, such as Yu Gwan-sun leaning against a very small light in a small prison without a single light, maximizes the space and the actor's chemistry. convey the sound