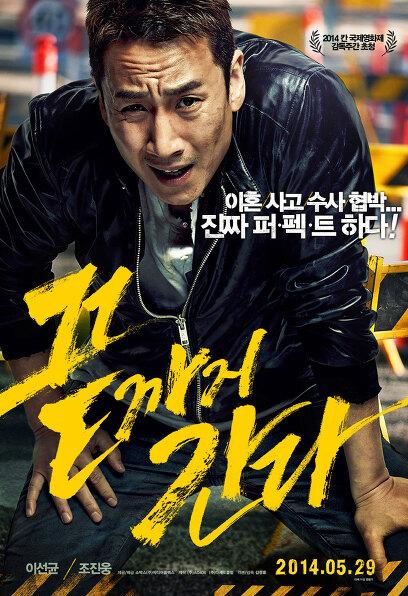 I thought it was completely hidden… !
On the day of her mother's funeral, Detective Go Gun-soo (Lee Seon-gyun) was rushed to the police station after receiving an urgent call.
From the news of his wife's divorce, to the sudden news of internal affairs,
The number of cases just before the stress explosion causes accidents in which people accidentally hit people.
An irreversible situation! The number of cases that have to be avoided somehow
He hides the body in his mother's coffin, where no one can find it.

The moment I thought it was over, he appeared!
However, the police soon started investigating the disappearance and hit-and-run cases.
The culprit is none other than himself, Geon-su, and he tries to cover it up.
Then one day, an unidentified witness, 'Park Chang-min' (Cho Jin-woong), who says he knows everything about the incident, appears.
In the midst of threats from Changmin, who tightens the number of cases while hiding his purpose
The situation of the number of cases is leading to an unpredictable crisis… !

The moment you believe it's over
Everything started again!

If you can't get it back,
I will go till the end!

Invitation to 'Director's Week' at the 67th Cannes Film Festival!
A well-made genre movie that combines cinematic fun and completeness of work!
The movie <Going to the End> was invited to the 'Director's Week' section of the 67th Cannes Film Festival. 'Director's Fortnight' was established by the French Director's Association in 1969 to introduce works differentiated from the existing Cannes Film Festival program. focus on doing In particular, in the 'Director's Week' section, which has recently been paying a lot of attention to high-quality commercial films, famous directors such as Martin Scorsese, George Lucas, Michael Haneke, and Francis Ford Coppola have presented their first feature films. Also, in Korea, director Lee Chang-dong (2000), Director Im Sang-soo of Those People (2005), Bong Joon-ho of Monster (2006), and Director Hong Sang-soo of Unknowingly (2009) are among the leading filmmakers in Korea. Directors were invited, and in particular, <Monster> was recognized both critically and commercially, and garnered praise from overseas critics. As a result, <The Monster>, which set a box office record of mobilizing 13.2 million viewers in Korea, received attention as an example of a commercial film recognized at the Cannes Film Festival, which achieved remarkable results at the box office. Following this, <Going to the End>, which entered the Cannes Film Festival 'Director's Week' as a genre film, was evaluated as "a very sophisticated and pleasant work that provides fresh stimulation", and captivated both critics and audiences with its fresh fun and solid composition. expected to catch

The ultimate tension that surpasses <The Terror Live>
A new crime action that will take charge of the hearts of the audience!
Unexpected traffic accident, no one at the scene. If the evidence disappears, no one will find out. The only evidence of that is a corpse hit by a car, and as long as it is hidden, the accident itself can be covered up. So, how can you completely hide the body? Wouldn't it be possible to completely conceal the body if it was right in the coffin, where the body should be? <Going to the End> starts with such a fresh idea and creates a breathtaking tension with an unpredictable development that shatters all these plans beautifully.

Detective Go Gun-soo, a detective who faces a desperate crisis as the case that started with a single mistake grows out of control. <Going to the End> offers a different kind of fun with an ironic setting in which a detective who has to investigate a crime has to cover up the crime to hide his mistake. Here, after solving one case, new crises and situations arise one after another, adding to the psychological pressure. In addition, the appearance of an unidentified witness who says he knows everything about the incident and the appearance of 'Geon-soo Ko', who struggles to completely hide and survive in the gradually increasing threat, adds tension and tightens the heart of the viewer. <Going to the End> is a crime action movie with fresh fun and exhilarating tension that surpasses <The Terror Live>, which captivated the audience with new materials and sophisticated directing last year, followed by the final counterattack of a desperate detective amidst such a quirky setting and chewy tension. will overwhelm theaters.

A momentary mistake, an event that grows out of control
An unpredictable story that one can't think of any other!
A perfect (?) day that can't be worse than the news of his wife's divorce at his mother's funeral, and the sudden news of an investigation into the investigation team. <Going to the End> draws a special empathy for the character through his struggles to cover up the accident. The audience feels a bit of pity and sympathy rather than accusing them of the 'number of cases' in which they made an unavoidable choice in a situation where all accidental and adverse conditions, despite the fact that they committed a criminal act. At the moment when a new phase is reached with the appearance of a mysterious witness 'Changmin', he becomes more emotionally immersed in the position of 'Geonsoo' and supports him. As a result, the audience also goes back and forth between tension and relief from the position of 'Geonsu' throughout the play, and the moment they believe the movie is over, they start running on a breath-taking road to a desperate situation as if they have put everything back to the beginning.

After the accident, as the investigation into the disappearance and hit-and-run incidents began within the police, at the same time as the appearance of an unidentified witness who coldly asked, “Is it worth killing people?” are in danger of becoming <Going to the End> seeks a new turn in the play through the appearance of 'Changmin', who threatens to know everything Geon-soo has done without revealing his purpose or identity, while trying to change the play, starting with a voice over the phone and gradually revealing his reality in the movie. As another viewing point of In addition, the final counterattack by 'Geon-soo', who can no longer step back or avoid it, delivers exhilarating pleasure and exhilarating fun. As such, a new and more difficult crisis that begins again after a crisis, and the development of an event that has a weak beginning but unpredictable ending for a single moment, warms the hearts of the audience with extreme tension and fun that they have not felt in other films. something to do.

Lee Seon-gyun, who competes with evil and bullying – Jin-woong Cho, an eyewitness of a threatening question
The new transformation of the two actors, the intense chemistry!
The movie <Going to the End> doubles trust and expectations for the work with the appearances of two strong actors, Seon-gyun Lee and Jin-woong Cho. First of all, Lee Seon-gyun, who has led the box office by moving between soft images and harsh charms through screens and CRTs such as <All About My Wife> and <Wagon Car>, [Golden Time] and [Pasta], will take off her romantic image and present a new acting transformation. . Lee Seon-gyun, who played the role of 'Ko Gun-soo', a desperate detective who got into a crisis through a single mistake in <Going to the End>, puts his whole body into action, as well as the psychological pressure in a desperate situation with realistic acting. shows
Meanwhile, Jo Jin-woong, who captivated the audience with his superb acting and strong charisma through works such as [Chuno] [Deep-rooted Tree], <War Against Crime: The Age of Bad Guys> and <Hwayi: The Child Who Swallowed a Monster>, is an unidentified witness. Shows cool villain acting as 'Park Chang-min'. 'Changmin' is a person who never misses the bait once it has been bitten, and who puts 'Geonsoo' into a corner by any means. In particular, 'Changmin', who does not lose his leisure in any situation and tightens the breath of 'Gunsoo' at his own pace, is a differentiated villain character that has never been seen before. .

Lee Seon-gyun, who transforms into a detective who fights evil and gangster, and Cho Jin-woong, who plays the role of a mysterious witness who threatens in his own way, form a tense structure in the film <Going to the End>. The new acting transformation and perfect breathing that two actors representing Chungmuro will show will be a special viewing point for the movie <Going to the End>, which repeats tension and relaxation and makes you sweat.

<Final Weapon Bow> Cinematographer, <Quick> Martial Arts Director
Hit directly, break and collide! Real and intense action and sights!
<Going to the End> enhances immersion by instilling more intense tension through realistic images and rough action in an unpredictable development. First of all, cinematographer Kim Tae-seong, who was well-received for his dazzling camera work and action-packed shooting through <The Last Weapon: Bow>, focused on capturing the tight breathing of Lee Seon-gyun and Cho Jin-woong in video, while creating a realistic and live atmosphere as much as possible. Focused. Therefore, instead of restricting the camera movement in advance or shooting within a predetermined frame, the shooting style and direction were flexibly determined according to the scene situation, and the best images of each scene were captured. Here, while naturally following the actor's movements to bring out the dynamism to the maximum, the visual beauty that adds reality through shooting in a time zone that matches the actual situation when shooting on location adds to the rich fun of sights.

In addition, <Going to the End> presents real action that is intense and sympathetic through the participation of martial arts director Choi Dong-heon, who drew attention with the speedy and dynamic action through the movie <Quick>. In particular, in this work, the emphasis was placed on enhancing the audience's empathy through improvised, real hit, broken, and collided actions, rather than a well-organized action. The life-style action that takes full advantage of the characteristics of everyday spaces such as bathrooms and apartment interiors delivers a different kind of pleasure and fun with the intense and intense physical fights between characters in desperate situations and the passionate performances of the actors who refused to double up. Above all, Lee Seon-gyun's acting, who went to film relying on a wire on the 19th floor of an actual apartment building, and directly digested the rough action of getting stuck in the toilet and rolling around, doubles the realism. <Going to the End>, which adds sympathy to the whimsical setting and realistic directing within it, will catch the eye with intense spectacles and actions that double the tension.