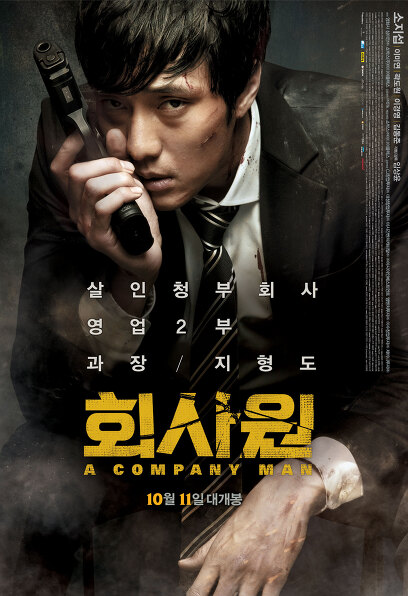 It looks like an ordinary metal manufacturing company, but when you get to know it, 'murder' is the result,
Topographic Map (So Ji-sub), Manager of Sales Department 2 in the Killing Company.
He is recognized for his competence with his coolness and calmness that does not make a single mistake.
10 years of running and looking ahead as the company told me,
He meets Hoon (Kim Dong-jun), a part-timer who resembles him when he was young.

While carrying out his mission with Hoon, he felt a moment's hesitation.
For the first time, he goes against the will of the company, which was everything to the extent of being home, school, and family.

Hyungdo feels the happiness of everyday life for the first time through meeting with Hoon's family.
Planning director Jong-tae (Kwak Do-won), who has always been watching him closely, notices a change in Hyung-do… .

The moment he dreamed of a normal life, the man who became the target of everyone!
In the fall of 2012, his last work begins!

I am an office worker.
It looks like an ordinary metal manufacturing company.
If you know it, it's a murder agency.
Sales Department Manager,
G, hyung, do.

For me, work is home, school, and family.
One day, when I ran to the front just as the company told me to,
I met the child.

I was just awkward
It was good though.

It was the first time.
And I wanted to change.

It's not a topographical map of the 2nd division manager of a contract murder company
I want to live a normal life like everyone else.

Now I want to quit my job.

1. A 'murder contract company' targeting your heart
October 2012, the most dangerous company is revealed!
In 2012, films dealing with dangerous and realistic subjects such as <Love Poetry>, which dealt with a parasite that kills a variant, and <Neighbors>, which dealt with a serial killer living in the same mansion and his suspicious neighbors, received a lot of love. The audience showed a lot of interest in films that were in contact with everyday life, but in which the cinematic imagination was adequately melted. Another movie, <Office Worker>, which deals with the most dangerous and deadly subject, is waiting for the audience's choice, attracting attention.

The movie <Office Worker> deals with a 'murder contract company' disguised as a general metal manufacturing company, and introduces the most dangerous and thrilling company that has never been seen in any other movie. The 'murder contract company' with the motto 'murder is the result' is the first condition that makes the movie <Office Worker> unique. The setting in the movie that such a dangerous organization exists in our society disguised as a general company gives freshness to the audience by itself.

Director Im Sang-yoon, in charge of directing, said, "The point that differentiates our film is that the characters who act are ordinary office workers, not fighters. For them, action is just a 'job'. It's not just a fight, it's a fight with a tie swinging as if writing a document, and the place is not like a warehouse or factory, but on an overpass, a gosiwon room, a building office, etc. There is,” said the fun of <Office Worker>.

Exotic situations such as a murder mock PT before a meeting with a client and a secret door leading to the shooting practice room and equipment room in the office add to the fun of the movie. In addition to this, the characters who appear as office workers in the movie, including the main character 'Hyungdo', who suffers from frequent overtime and work stress, empathize with the realistic daily life of ordinary office workers. The movie <Office Worker>, which adds realistic characters and the unique space of a murder contract, is expected to present a fresh and intense drama in the coming October.

2. Actor with style and emotion, So Ji-sub, the representative of Korea
Transformed into a 'office worker' in the second part of the sales department of the murder contract!
In this movie, the most notable thing is actor So Ji-sub who has transformed into an ordinary 'office worker'. In the meantime, he has been nicknamed 'Soganji' with his deep eyes, stylish fashion, and unique sensibility shown in works such as dramas [I'm sorry, I love you], [Cain and Abel], movies such as <The Movie is a Movie>, and <Only You>. Having gained it, he further solidifies his own color in the movie <Office Worker>. Ji Hyung-do, the most trusted manager in the 'company', is the coolest character he's ever played, an office worker who has been working silently for 10 years at a murder contract where 'murder is the result'. However, as he meets Hoon and his family, a part-timer who reminds them of his childhood, he feels the warmth and relaxation of everyday life that he has never felt before, and gradually begins to dream of longing for a normal life.

Actor So Ji-sub perfectly digests the dramatic story and changes in emotions that take place in a situation where he has become a target for the company, his colleagues, and everyone through the movie <Office Worker>, not only improving the film's perfection, but also providing explosive acting skills that lead a heavy drama. This heralds another leap forward as an actor. Actor So Ji-seop, who has been loved for his deep eyes and delicate emotional acting, meets the 100% synchro rate 'Jeong-do', a competent office worker in a murder contract and reticent but warm-hearted, and shows off his own personality and charm without regret. Breathing life into the play. So Ji-sub, an actor who will show off a luxurious performance that blends with the character in delicate acting with perfect control and emotional lines, from the cold appearance in the early stages of the movie to the scene in the second half that explodes emotions for the company. In this way, his true face, who has been perfectly reborn as a 'topographic map', is expected to color the screen this fall with the unique color of <Office Worker>.

3. So Ji-sub, Lee Mi-yeon, Kwak Do-won, Lee Kyung-young, Kim Dong-jun
100% synchro rate, a gorgeous acting ensemble of actors from Chungmuro + Rookie!
The movie <Office Worker> adds to the fun of the movie by appearing in large numbers, including So Ji-sub, Lee Mi-yeon, Kwak Do-won, and Lee Kyung-young, who can be trusted just by hearing their names, as well as up-and-coming screen rookie Kim Dong-jun. Actor So Ji-sub not only shows a restrained charisma that is integrated with the character, but also Lee Mi-yeon, a representative actress from Chungmuro, who returns to the screen after 5 years, takes on the role of 'Yoo Mi-yeon,' the mother of Hoon, a former singer, exuding charm with her unchanging beauty and acting skills. She will take off her sophisticated and urban image and play the role of 'Yoo Mi-yeon', a mother of two who tries not to lose her laughter in the hardships of life, and will show the true essence of acting as a veteran actress.

Kwak Do-won, who is raising the best stock price across screens and CRTs, is expected to show off his presence on the screen by playing the role of 'Kwon Jong-tae', who is Hyung-do's company colleague and disputes his affairs. In addition, in the role of 'Secret-General', who is Hyeong-do's teacher and assistant, actor Lee Kyung-young will show a stable performance through his passionate acting and once again restrained charisma.

Here, as a member of the group 'Children of the Empire', Kim Dong-jun, who makes his first screen debut through <Office Worker>, is responsible for the freshness of the play by playing the role of 'Rahoon', a part-time student in the second part of sales. Kim Dong-jun, who perfectly portrayed the 'Hun' character by exuding his hidden acting talent with his bold charm, will catch the audience's attention at once as a next-generation prospect who will lead Chungmuro through <Office Worker> this fall.

Although it looks like an ordinary company, it turns out that the perfect ensemble of actors who showed the true taste of acting by creating characters that live and breathe on the screen and the dramatic fun of the unique setting of a hit-and-run company doubles the perfection of the film, and the best emotional action in the fall of 2012. It heralds the birth of a drama.

4. A fantastic meeting of intense action and deep sensitivity!
This fall, the best emotional action drama is coming!
In the fall of 2012, the first emotional action drama, <Office Worker>, will bring catharsis and deep resonance to the nation. The two genres, 'action' and 'emotion', which do not seem to go well together at first glance, come into perfect harmony with the subject of 'murder contract company', demonstrating a greater synergy effect. Weapons such as knives and guns are based on Sistema, the martial art of the Russian Special Forces, in order to give the feeling that it should look cruel and decisive like the actual action of the 'office workers', not the fights without reason of the fighters. From martial arts using various tools, all were mobilized. In particular, for the role of the company's best elite, 'Jehyung-do', actor So Ji-sub has been steadily honing his system before filming, as well as undergoing shooting training to complete the breathtaking action in the movie, and the audience will experience a catharsis that holds sweat in their hands.

In addition, Hyung-do, who used to be his home, school, and everything, longs for an ordinary daily life as he meets Hoon and Hoon’s family. building consensus.

The movie <Office Worker>, which created a three-dimensional and rich drama based on sympathetic emotions as well as genre fun resulting from such a unique setting, will dominate the theaters as the most anticipated work this fall.