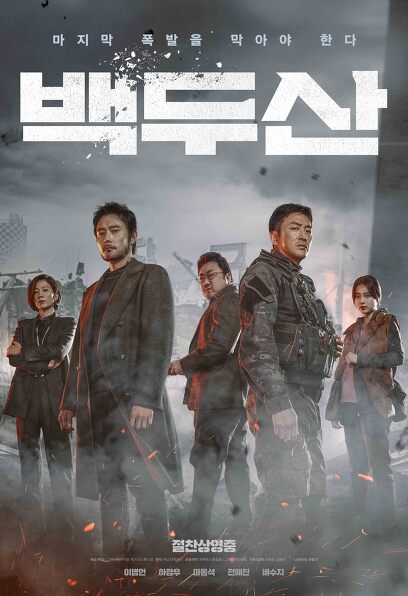 The largest eruption of Mt. Baekdu in Korean observation history.
The sudden disaster quickly turned the Korean peninsula into a crisis,
Additional explosions are predicted that will devour both South and North Korea.

In order to prevent an unprecedented disaster, Jeon Yoo-kyung (Jeon Hye-jin)
Plan an operation according to the theory of geology professor Kang Bong-rae (Ma Dong-seok), who has studied the eruption of Mt. Baekdu.
EOD Captain Jo In-chang (Ha Jung-woo), who is about to be discharged from the military, is put into a secret operation where the fate of South and North Korea is at stake.
'Inchang', who succeeded in making contact with 'Ri Jun-pyeong' (Lee Byung-hun), a first-class resource from the North Korean Ministry of Armed Forces, who holds the key to the operation.
However, 'Junpyeong' makes 'Inchang' difficult because of his unknown behavior.
Meanwhile, without knowing that 'Inchang' was put into operation in North Korea,
'Choi Ji-young' (Bae Suzy), who is left alone in Seoul, struggles to survive in the face of disaster.
Meanwhile, the time until the last eruption of Mt. Baekdu is getting closer… !

In December 2019, Mt. Baekdu explodes!
<Along with the Gods> series Dexter Studios production
An unprecedented disaster is coming that will devour both South and North Korea

Baekdusan is the highest mountain on the Korean Peninsula and the volcano that caused the largest eruption. A bold imagination of the explosion of Mt. Baekdu, which had been dormant for about a thousand years, unfolds on the screen. Dexter Studios' new work <Mount Baekdu>, which produced the series <Along with the Gods>, which opened a new world of Korean fantasy blockbuster with spectacular sights going back and forth between the afterlife and the next, captivated a total of 26 million viewers, is unpredictable development and overwhelming visuals It will bring new fun to the theaters at the end of this year and decorate the end of the year.

<Mount Baekdu> is a film about people who must prevent the last eruption of Mt. Baekdu, an unprecedented disaster that will devour both South and North Korea. Baekdusan begins with the appearance of the Republic of Korea, where the largest eruption of Mt. Baekdu in the history of observation of the Republic of Korea has occurred, and the sudden disaster has quickly turned into a disaster. A total of four volcanic eruptions are predicted, North Korean agent 'Ri Jun-pyeong' and EOD Captain 'Jo In-chang' are involved in a covert operation to prevent the last eruption that will devastate the Korean Peninsula. Even 'Choi Ji-young', who is left alone in Seoul, leads the audience to the middle of the disaster scene by going back and forth to confront an unprecedented disaster. In particular, 'Lee Jun-pyeong', who pretends to cooperate with the operation but moves secretly while hiding the real purpose, 'Jo In-chang', who tries to carry out an operation somehow to get back to her family, and South and North Korean agents who are put into an operation where the fate of everyone is at stake for different reasons. provides unexpected fun with unpredictable chemistry. As the time until the final eruption of Mt. Baekdu is getting closer, the probability of success is 3.48%, and the characters' struggle to succeed in an operation that is close to impossible provides a different tension from existing disaster movies and raises the immersion of the play. From the trusted actors Lee Byung-hun and Ha Jung-woo, to the unrivaled presence of Ma Dong-seok, Jeon Hye-jin, and Bae Suzy, the synergy of actors who represent Korea in name and reality and the overwhelming sights completed by the best talented production team, <Mt. December will rock the theaters.

December 2019, the impossible operation begins!
Holding hands to prevent the last eruption of Mt. Baekdu
The story of people who must prevent an unprecedented disaster
Unlike the existing disaster movies, which depict characters who are caught up in a sudden disaster and struggle to survive in it, the characters who work together to prevent disasters are the unique point of <Mt. Baekdu>. The story of characters who struggle in their own way in the face of an unprecedented disaster that will devour both North and South Korea offers unexpected fun and high immersion.

Ri Jun-pyeong, a first-class resource belonging to the North Korean Ministry of Armed Forces, was imprisoned in a concentration camp and participated in the South's secret operation to prevent the eruption of the Mt. Baekdu volcano. 'Lee Jun-pyeong', who exudes a unique presence from the first appearance, seems to cooperate with the operation, but moves secretly to achieve his own purpose without revealing his true intentions, adding tension to the play. Special Forces EOD Captain 'Jo In-chang' is a technical team in charge of dismantling missiles and is sent to the operation to prevent the last explosion of Mt. Baekdu. Jo In-chang, who is trying to carry out an operation somehow to return to his family left in Seoul, is embarrassed by Lee Jun-pyeong's sudden action, but shows an unexpected chemistry as they gradually work together. Bong-Rae Kang, a professor of geology at Princeton University, is an expert who has studied Mt. Baekdu for many years. He predicts the eruption of Mt. Baekdu in advance and establishes his own theory to prevent the final eruption even though the probability is only 3.48%. 'Bong-rae Kang', who feels the burden and responsibility for the operation and strives to increase the probability of success, delivers freshness with an energetic charm that is differentiated from the scientist character in the existing movie. Here, 'Jeon Yu-kyung' is a person who plans an operation based on 'Kang Bong-rae''s thesis when both South and North Korea are in danger of disappearing. Finally, 'Choi Ji-young', who was left alone in Seoul without knowing that her husband 'Jo In-chang' was involved in an operation in North Korea, delivers a vivid sense of realism with the courage and courage to face disasters with the will to survive. In this way, the story of various characters who face unprecedented disasters in different ways will provide tension and fresh fun with an unpredictable development.

Lee Byung-hun and Ha Jung-woo's first acting breath
The unique presence of Ma Dong-seok, Jeon Hye-jin, and Bae Suzy
The greatest synergy of the actors representing Korean cinema explodes!
<Mount Baekdu> raises expectations for the first two actors, Lee Byung-hun and Ha Jung-woo, representing Korean cinema. A political thug in <Inside Men>, a loyalist who worries about the fate of the country in <Namhansanseong>, an obsolete former boxer in <That's My World>, a U.S. Marine Corps officer in [Mr. Sunshine], a new transformation regardless of genre Lee Byung-hun, an actor who believes and sees repeatedly, challenges the character of a North Korean agent for the first time since his debut through <Mount Baekdu>. Lee Byung-hun, who played the role of 'Ri Jun-pyeong', who holds the key to the operation to prevent the eruption of Mt. Baekdu, will not only challenge acting in various languages such as North Korean dialect, Chinese, and Russian, but also present high-level action using firearms, delivering a variety of charms. Ha Jung-woo, who captivated the audience as a news anchor in <The Terror Live> who is threatened by a terrorist in <The Tunnel>, and as a character facing a realistic disaster situation alone in <Tunnel> as the role of an ordinary father trapped in a collapsed tunnel. In the role of 'Jo In-chang', an EOD captain who was put into operation, he faces an unprecedented disaster. On the day of his discharge, Ha Jung-woo, who played the role of 'Jo In-chang', who suddenly became the head of an operation that depended on the fate of the north and the south, will fascinate the audience once again with his unique charisma and humorous acting without missing the desperate feeling of a disaster situation. In order to prevent the explosion of Mt. Baekdu, Lee Byung-hun and Ha Jung-woo's tight acting synergy, who met as North and South Korean characters with different purposes and different personalities, raises the level of immersion to the highest level.

Ma Dong-seok, Jeon Hye-jin, and Bae Su-ji, who have a unique presence, fill the screen with their different personalities and charms. Kang Bong-rae, a professor of geology who has studied volcanic eruptions in Mt. Baekdu, has been responsible for the box office success from <Crime City> to <Along with the Gods – Causality and Kite>, <The War of the Evil>, and <Bad Guys: The Movie>. Popular actor Ma Dong-seok takes on the role, and he plans to captivate the audience with his intellectual charm and reversal character that is 180 degrees different from the intense masculine character shown in his previous work. In addition, Jeon Hye-jin, who plays 'Jeon Yoo-kyung', who proposes a strategy to prevent the last explosion of Mt. Baekdu, dominates the screen with charismatic acting, and Bae Soo-ji, who must survive 'Choi Ji-young', plays a character struggling in the middle of a disaster. It adds liveliness to the play by digesting it with the cast smoke. The hot acting synergy created by actors representing Korea in name and reality will be a viewing point unique to <Mount Baekdu>, which cannot be seen anywhere else.

The crew of <Along with the Gods>, <Snowpiercer>, <Mischief>, and <Namhansanseong>
From the first Jamsu Bridge control filming for a Korean movie to a large-scale open set
An unprecedented disaster unfolds vividly on the screen!
The best production crews in Korea have gathered to bring an unprecedented disaster on the screen that has never been dealt with in a Korean movie. In order to capture the appearance of the Korean Peninsula that is gradually becoming paralyzed due to the volcanic eruption of Mt. Baekdu a total of four times, the production team of <Mt. Baekdu> took on new challenges, from filming at a location controlled by a Jamsu Bridge in the middle of downtown Seoul to producing a large-scale open set in Chuncheon. has completed

Kim Ji-yong, the first Korean film to win the Golden Frog Award (Best Cinematography), the highest honor at the Energa Camerimage Awards in 2018, is well-received for her filming style that conveys a vivid sense of immersion in <Secret Secret> and <Namhansanseong>. We put great effort into creating an experiential visual that seems to be inside. By making the camera lighter and minimizing the distance from the person, the immersion was increased as if experiencing a real disaster right next to you. It was brought to life. In addition, in order to capture the disaster situation in the middle of Seoul, such as the Jamsu Bridge tsunami, for the first time in a Korean film, the full control filming permission of the Jamsu Bridge was obtained and filming was carried out on location, completing a scene with a vivid sense of reality. Art director Kim Byung-han of <Snowpiercer> and <The Attorney> focused on enhancing the reality that the audience will feel when a disaster occurs in a familiar space. The scene as if it happened was reproduced. In addition, a large-scale open set was produced in Chuncheon over 4 months to capture the devastation of North Korea devastated by the volcanic eruption of Mt. Baekdu, and the details such as decorations, props, and colors were put into detail to create a realistic space as if you were in the middle of downtown North Korea. did. Dexter Studio, recognized for its innovative technology through the <Along with the Gods> series, implemented the Pre-Visualization system, which is a pre-visualization work that implements the image conceived before filming on the computer, and close collaboration between each team from the pre-production stage. And through several simulations, the disaster scene was materialized. Based on the completed previs, it was possible to proceed with dynamic shooting with minimal trial and error at the actual filming site, and through this, an overwhelming sense of urgency was completed. <Mt. Baekdu>, completed with the hard work of top producers representing each field, will lead the audience to an unprecedented disaster.