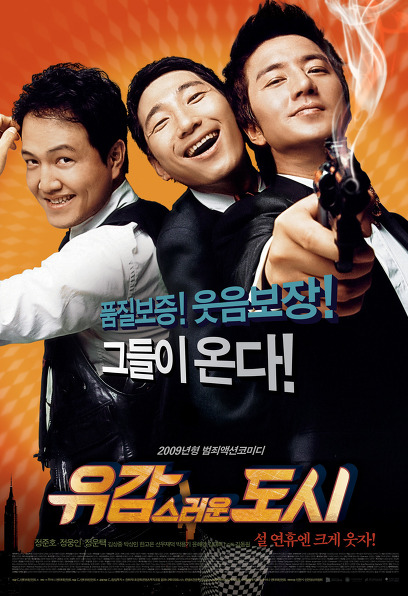 Police vs Criminals
The perfect role change for special missions!

The secret police who infiltrated the organization, Jang Chung-dong

The traffic police 'Jangchung-dong' with a strong spirit. He joins the special investigation team because his face is unknown to the outside, and is tasked with a once-in-a-lifetime special mission of infiltrating as a new member of a large corporate organization. 'Chung-dong', who was subjected to various criticisms as a subordinate of 'Moon Dong-sik', also called 'head', saved the life of 'Yang Gwang-seop', the boss of the organization with the planned help of the special investigation team, and quickly emerged as the leader of the organization.

A member of the gang who dug into the police
Meanwhile, the organization also finds talent to infiltrate under the guise to avoid the special investigation team's investigation network, and the 'Double Battalion' takes on the task. Of course, because the face is unknown… . The 'company' uses their experience (?) as a member of the gang to solve homicide cases one after another and joins the special investigation team. Then, he falls in love with Inspector Se-rin Cha, an internal apology officer, and is monitored by the second-in-command of the organization, Ssang-kal, who notices this.

The full-fledged special mission of the powerful and organized world that changed everything begins!
'Jangchung-dong' and 'Dongdae', whose everything has changed from police to gang members and from gang members to police officers, begin their full-fledged mission to deceive and deceive ahead of the organization's smuggling Russia… .

Complete role change like a fish in water!
Will they be able to hide their true nature and complete the breathtaking special mission??..

“Good and evil always coexist in the world…
Sometimes… When you see the real bad guys… … I myself become evil.
Am I a good person or a bad person who wants to kill such bad guys… ”

This is a really fun city.
.
.
.
where light and darkness coexist
Sorry city…

They are coming to pacify the pitiful world!
Seven years after capturing the hearts of the audience with <The Heads of War>, the landscape of Korean comedy films has changed a lot, but the representative Korean comedy corps that can break the trio, the hero of <The Heads of Mind> has not appeared. Jung Jun-ho, Jung Woong-in, and Jung Woon-taek, who are Korea's best comedy divisions and who made the box office myth of comedy movies, unite again with unmatched perfect harmony to rebuild their myths.

The Jung Trio, who came together under the belief that it is a work that can save the Korean comedy film industry, which has been stagnant with similar materials and boring content, exudes their own unique charm, and pioneers a new comedy area through upgraded characters, leading to laughter from the audience. will be responsible for When the three are together, the three funny men, who create powerful comic synergy, transform into attractive spy characters that have never been shown before, and the fun of a spectacular reversal is added to deliver unexpected fun to the audience.

Super luxurious casting following Korea's representative comedy corps!
Sang-joong Kim, Sang-min Park, Go-eun Han, Hae-young Yoon, Jae-duk Seon, Dae-hee Kim
<Unfortunate City> boasts a corps of veteran actors who are worthy of the term of studded casting, with actors familiar just by hearing their names appearing. First, actor Kim Sang-joong, who has been loved by the audience as the best comic actor along with Jung Trio since <All the Heads of Mind>, will once again challenge the comedy genre. Park Sang-min, Han Go-eun, Yoon Hae-young, Seon-woo Jae-deok, and Kim Dae-hee, who will present the first comical acting, will be responsible for a bigger laugh than expected.

Park Sang-min, who showed a strong presence with unstoppable masculine charisma from <The General's Son> to the recent drama [The Great King Sejong], shows off his charisma in the movie <Unfortunate City> while showing a comical inside that does not fall behind the regular trio. And Han Go-eun, who is divided into a bold female detective who actively attacks Lee Jung-dae (Jung Woong-in), a member of the police who digs into the police, takes control of the screen that has returned after 10 years by showing off her original sexiness while fully demonstrating the charm of a quirky character. Yoon Hae-young, who appears as the only tough wife who makes the boss (Kim Sang-joong) scared, surprised the audience by showing off her first comic acting with thick words and facial expressions. The appearance of prominent supporting actors created a powerful fun that no one could have predicted. In particular, compared to the trio Jung and Sang-joong Kim, who had worked together in the past, the new actor corps, who worked with them for the first time, showed perfect and comfortable breathing with the existing members, helping to create a family-like atmosphere. He surprised the people around him with his unbelievably professional acting.

The clever performances of the new actors who discovered their comic talents through <Unfortunate City> will be the most powerful comic viewing point for this movie.

Overpowering with action and style
2009 Crime Action Comedy!
The movie <Unfortunate City> is going to present the comical content of a counter-spy operation between a criminal organization and the police, armed with a variety of blockbuster-level attractions to the audience. This work, which breaks the prejudice against comedy movies and naturally melts colorful attractions such as action, chase, and large-scale extra scenes, as well as certain elements of comedy, is expected to show off the aspect of an 'upgrade comedy movie'. From the Jeju Island Yakcheonsa scene, where 500 extras and helicopters were mobilized, to the explosion of a vehicle when it reaches its climax, the Incheon port scene, and the confrontation between 'Jangchung-dong' and 'Double University' filmed in an outdoor parking lot in Incheon, it is a blockbuster-class action scene. It shows the climax of the stylish video and gives a foreboding of the birth of a new comedy film. In particular, director Kim Dong-won, a former CF director, works with a veteran advertising team for filming and lighting for the visual beauty of <Unfortunate City>, which claims to be a crime action comedy. We succeeded in creating a visual beauty. As if in response to the efforts of the production crew, the actors went to the scene even on days when there was no filming, or talked with the director to immerse themselves in the station, and it is said that they devoted their energy to the movie, such as meeting from time to time to share opinions about the role.

Combining various action scenes reminiscent of an action movie, stylish visuals, and perfect chemistry between the actors, <Unfortunate City> presents the essence of a 2009-style upgraded comedy movie, giving the audience a unique experience with a comedy movie they have seen so far. going to do it

Stylish and in-depth video completed with a different shooting technique
The movie <Unfortunate City>, which suppresses the gaze with a stylish image that could not be seen in a general comedy movie, succeeded in creating a deep image by introducing a different filming technique to fit the genre of '2009 crime action comedy'.

Based on the theme of 'an exciting counter-espionage operation between the police and the organization', the movie <Sorry City> is a perfect blend of comedy and crime action. It was the greatest mission of the filming team for <Unfortunate City> to highlight the virtues of a comedy movie by allowing the actors' comic lines and acting to stand out naturally while maintaining the stylishness of a crime action movie. Director Kim Dong-won and cinematographer Kim Hyo-jin, who have already filmed various CFs in the advertising industry, used various shooting techniques to achieve this mission, creating attractive images that have not been seen in comedy movies.

<Unfortunate City> was shot to give the impression of a deep blue color, which uses a method of adding a stronger contrast to the background than the person when shooting set or outdoors, and filters the lighting so that the background is blue as a whole. The effect was doubled by taking pictures. In addition, the effect used together at this time is 'wormwood' smog, which is somewhat heavier than other smog and has a feature of sinking to the bottom of the screen, which helped to deepen the depth between the actor and the background. The 'wormwood' smog and filter lighting, which is about 80% of the filming amount, is expected to convey the feeling of a sophisticated action movie to the audience, which is not inferior to any stylish crime action movie. In addition, while most movies use a wide lens, the filming team of <Unfortunate City> chose to use a standard lens and shoot with the camera on their shoulder in order to capture the characters reflected in the audience's eyes as naturally as possible. I focused on the effect that gives the feeling of seeing the characters in the movie with my own eyes. This filming technique will deliver a realistic feeling, as if watching the comedic performances of various actors, including Trio Jung, right next to you.

Guaranteed quality, guaranteed laughter, let's laugh again!
If you're a Korean audience, it's a comedy on the Lunar New Year holiday!
An exceptionally eventful year 2008 has passed and there is nothing exciting to do. It is a regrettable city where laughter has disappeared. <Sorry City>, which will bring cool fun to the people of Korea, is scheduled to explode as Korea's first comedy on New Year's Day in 2009. . Especially during the Lunar New Year holidays for the past few years, comedy films have been strong, so we look forward to the comedies of the greatest comedies Jung Jun-ho, Jung Woong-in, and Jung Woon-taek. A comedy that will stimulate the audience's five senses, from action to style videos, from the main actors to the supporting actors, to the perfect comic performances of the actors with unique comic instincts. It will capture the hearts of the audience with a comedy film.

“I want to show the power of Korean comedy films once again. And I want to bring laughter to the people of the Republic of Korea who are in a slump with dark news.” From male audiences who want to feel the fun of the crime action genre, female students waiting for a movie worth having a laugh with their friends, and family audiences who want to greet the new year with laughter with the whole family over the Lunar New Year holidays, the movie <Regrettably> attracts everyone's taste. Lovely City> is a comedy that is a must-see movie for the whole family, and is expected to make everyone laugh brightly in charge of the 2009 Lunar New Year holidays.